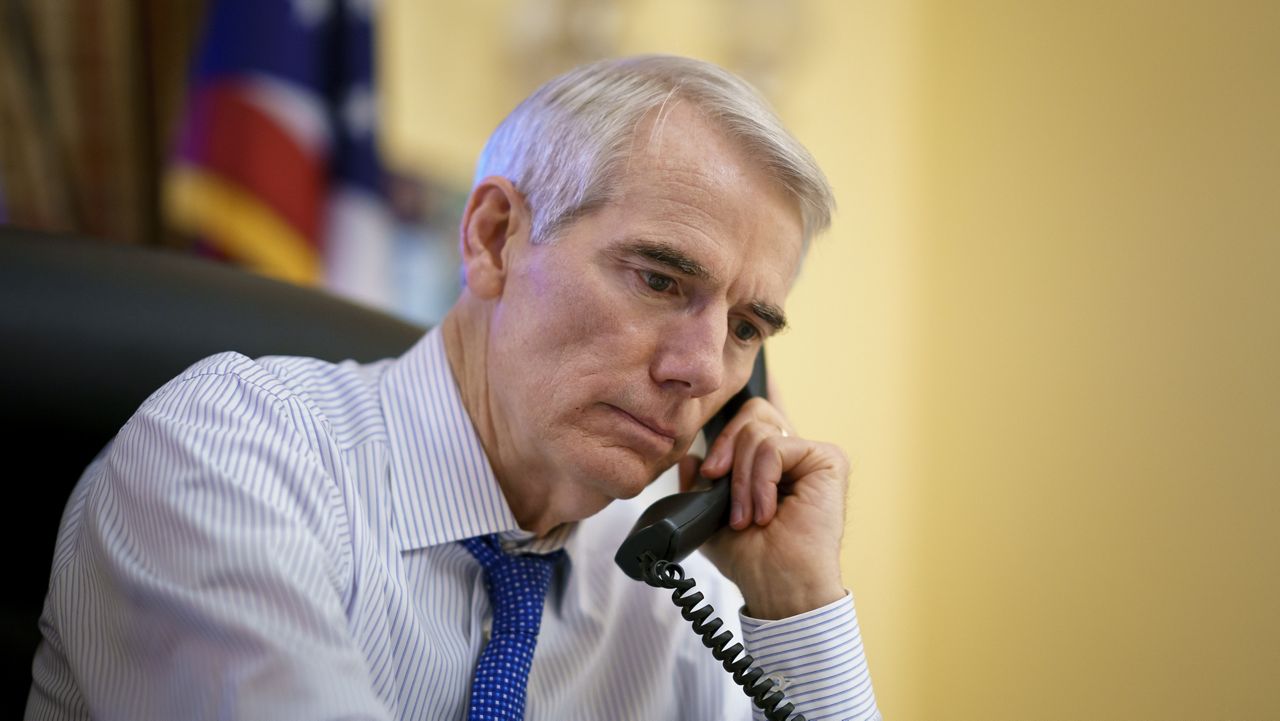 Sen. Rob Portman, R-Ohio, the top Republican negotiator on the bipartisan infrastructure bill, works from his office on Capitol Hill as he continues to shepherd the $1 trillion legislation closer to passage, in Washington, Monday, Aug. 9, 2021. (AP Photo/J. Scott Applewhite)

The often-elusive political center is holding steady in the Senate with a strong coalition of Democrats and Republicans brushing off critics to push the $1 trillion infrastructure package toward passage. Final votes are expected Tuesday.

On the left, the Democrats have withstood the complaints of liberals who say the proposal falls short of what’s needed to provide a down payment on one of President Joe Biden’s top priorities.

From the right, the Republicans are largely ignoring the criticism from their most conservative and far-flung voices, including a barrage of name-calling from former President Donald Trump as he tries to derail the package.

All told, some 70 senators appear poised to carry the bipartisan infrastructure bill to passage, a potentially robust tally of lawmakers eager to tap the billions in new spending it will unleash for public works projects back home.

“For the first time, the Senate has come together around such a package in decades,” said Senate Majority Leader Chuck Schumer. He opened the chamber Monday saying the Senate was “on the precipice” of passing the legislation after what he acknowledged was a long slog.

One remaining issue, over tax compliance for cryptocurrency brokers, appeared close to being resolved after senators who had been at odds on the proposal announced they had worked with the Treasury Department to clarify the intent.

Sens. Rob Portman, R-Ohio, Mark Warner, D-Va., Pat Toomey, R-Pa., and others involved in the cryptocurrency effort said in a joint statement they would propose an amendment to be added to the package.

During a second consecutive weekend session, senators had hoisted the Infrastructure Investment and Jobs Act over several hurdles, easily clearing a remaining 60-vote threshold Sunday on a vote of 68-29, despite a few holdouts trying to run out the clock on debate and drag final passage. The measure would then go to the House.

“This is something that brings this country together,” said Portman, a lead negotiator of the overall bill, during Sunday’s session. “We need the investment, let’s be honest.”

The rare bipartisan momentum reflects a political power center that has sprung up in the narrowly split Congress. For weeks, senators have negotiated and shaped the package, overcoming partisan gridlock for a compromise with the Biden White House. A bipartisan group of House lawmakers has pledged its own support.

Backed by Biden and a sizable coalition of business, farm, labor and public interest groups, the package is one of the biggest investments of its kind in years. The bill seeks to inject nearly $550 billion in new spending on roads, bridges, broadband internet, water pipes and other public works systems undergirding the nation. Some 20 Republican senators are poised to join Democrats in supporting support it.

“Look at the players,” said Sen. Richard Burr, R-N.C. “These are not the fringes of both parties.”

Once voting wraps up, senators immediately will turn to the budget outline for a $3.5 trillion package of child care, elder care and other programs that is a much more partisan undertaking and expected to draw only Democratic support.

House Speaker Nancy Pelosi has said the two bills will be considered together, but on Monday a bipartisan group of centrist lawmakers urged her to bring their smaller plan forward quickly, raising concerns about the bigger bill, in a sign of the complicated politics ahead.

“This once-in-a-century investment deserves its own consideration,” wrote Rep. Josh Gottheimer, a leader of the bipartisan Problem Solvers Caucus, in a letter obtained by The Associated Press. “We cannot afford unnecessary delays.”

Despite the momentum for the first package, action ground to a halt over the weekend when Sen. Bill Hagerty, a Tennessee Republican allied with Trump, refused to speed up the process.

Hagerty, who had been Trump’s ambassador to Japan, argued for taking more time for debate and amendments, in part because he wants to slow the march toward Biden’s $3.5 trillion bill aimed at “soft infrastructure.”

Trump called Hagerty on Sunday morning, said a person familiar with the call who requested anonymity to discuss it. Hagerty said his own efforts were to prevent a “socialist debt bomb” of new government spending.

Senate Minority Leader Mitch McConnell of Kentucky has so far allowed the bill to progress, calling it a compromise.

Senators have spent the past week processing nearly two dozen amendments to the 2,700-page package, but so far none has substantially changed its framework.

More amendments have been offered to inject $50 billion on defense-related infrastructure and to allow states to repurpose a portion of their untapped federal COVID-19 relief aid for infrastructure. But it was unclear if those changes would be considered for votes.

Senators have found much to like in the bill, even though it does not fully satisfy liberals, who view it as too small, or conservatives, who find it too large.

An analysis of the bill from the Congressional Budget Office drew concerns, particularly from Republicans after it concluded the legislation would increase deficits by about $256 billion over the next decade.

Unlike Biden’s bigger $3.5 trillion package, which would be paid for by higher tax rates for corporations and the wealthy, the bipartisan package is to be funded by repurposing other money, and with other spending cuts and revenue streams. The bill’s backers argue that the budget office was unable to take into account certain revenue streams — including from future economic growth.

The House is expected to consider both Biden infrastructure packages when it returns from recess in September.