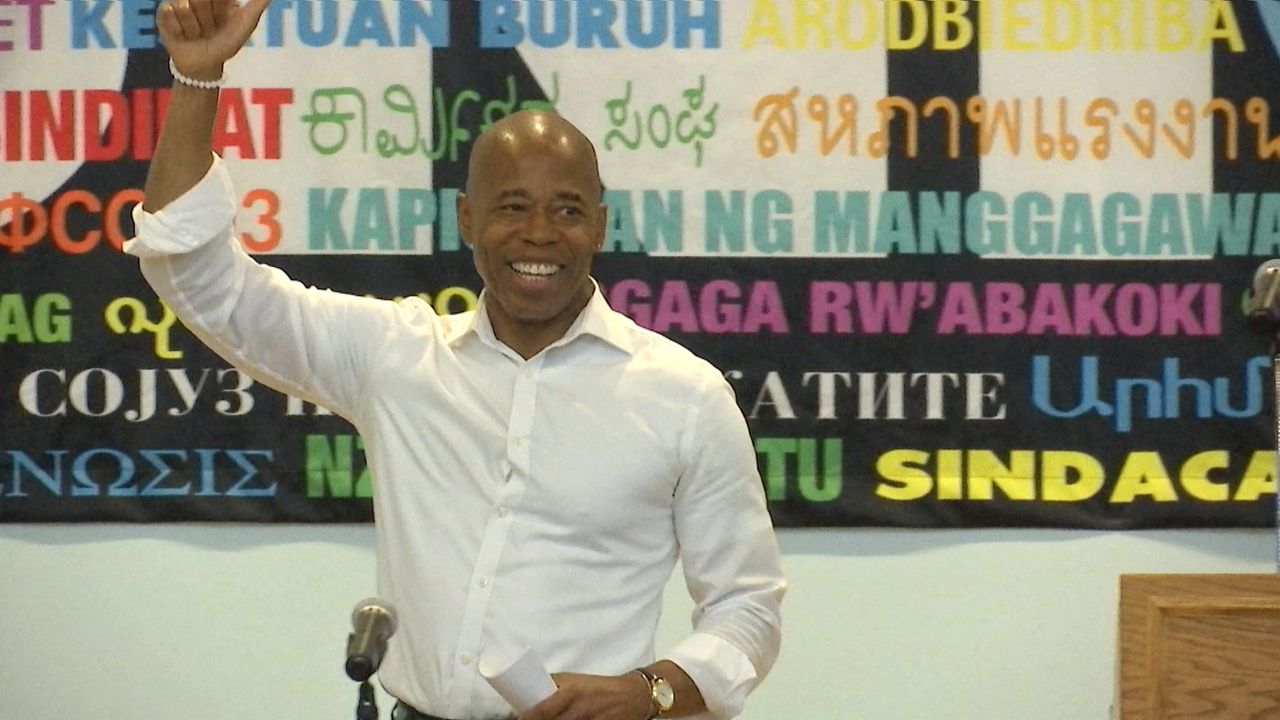 ‘I never forget my first’: Adams vows to back Hotel Trades Council after early endorsement

NEW YORK — It’s relatively small, but one of the most powerful and politically influential unions in the city — and now the Hotel Trades Council (HTC) is once again on track to have a powerful ally at City Hall.

"You have been my first major union endorsement, I never forget my first. You are my love," Adams told a packed room of union workers at HTC headquarters in Midtown on Thursday.

“The mayor is here!” - big reception for @ericadamsfornyc who has just arrived at @NYHTC headquarters for a victory rally.
(He’s not mayor yet) pic.twitter.com/UKNjpkQasq

HTC President Rich Maroko hosted a victory rally for Adams on Thursday, praising him as the only candidate who can deliver on the union's priorities.

"There is no question in my mind that we can count on Eric, that our city gets built back quickly, efficiently and equitably," Maroko said.

The union, which represents thousands of non-managerial hospitality and gaming employees, bet big on Adams. It was the first to endorse him, spent millions of dollars on his campaign and marshaled thousands of its workers to volunteer.

So on Thursday, Adams walked into the union headquarters to a hero's welcome and promised to take care of HTC’s interests.

"You believed in me, I believed in you and we are going to turn this city into a city where blue-collar people will survive," Adams said.

The hotel industry, devastated by the COVID-19 pandemic, has a reliable ally in Mayor Bill de Blasio. For years, he supported their agenda and pushed for legislation that favored the union. If Adams wins the general election in November, it does not appear the union will be in need of new friends.

"Eric really understands in general the needs of working people and of hotel workers in general," Maroko told NY1. “It's important for us that we have someone in City Hall who has our back and we feel that Eric is that guy.”

Already, Adams is aligning himself with two of the union's biggest priorities: keeping Airbnb out of the city, and supporting legislation to require City Council approval before any new hotel is built.

“What we did with Airbnb, we did not regulate it, and it really hit on our affordable housing,” Adams said.

The hotel industry is at a crossroads after the COVID-19 pandemic decimated the tourism industry. Now, Adams says he's open to repurposing some hotels as long as they are outside Manhattan.

"While we wait for tourism to come back, there is so much we can do to pair the affordable housing, use SRO models, there is many great things we can do with some of these hotels and I'm looking forward to that," he said.

Adams is also looking to November's general election and cashing in: the Campaign Finance Board on Thursday announced a new round of matching funds, with the Adams campaign set to receive more than $1.3 million in public funds.