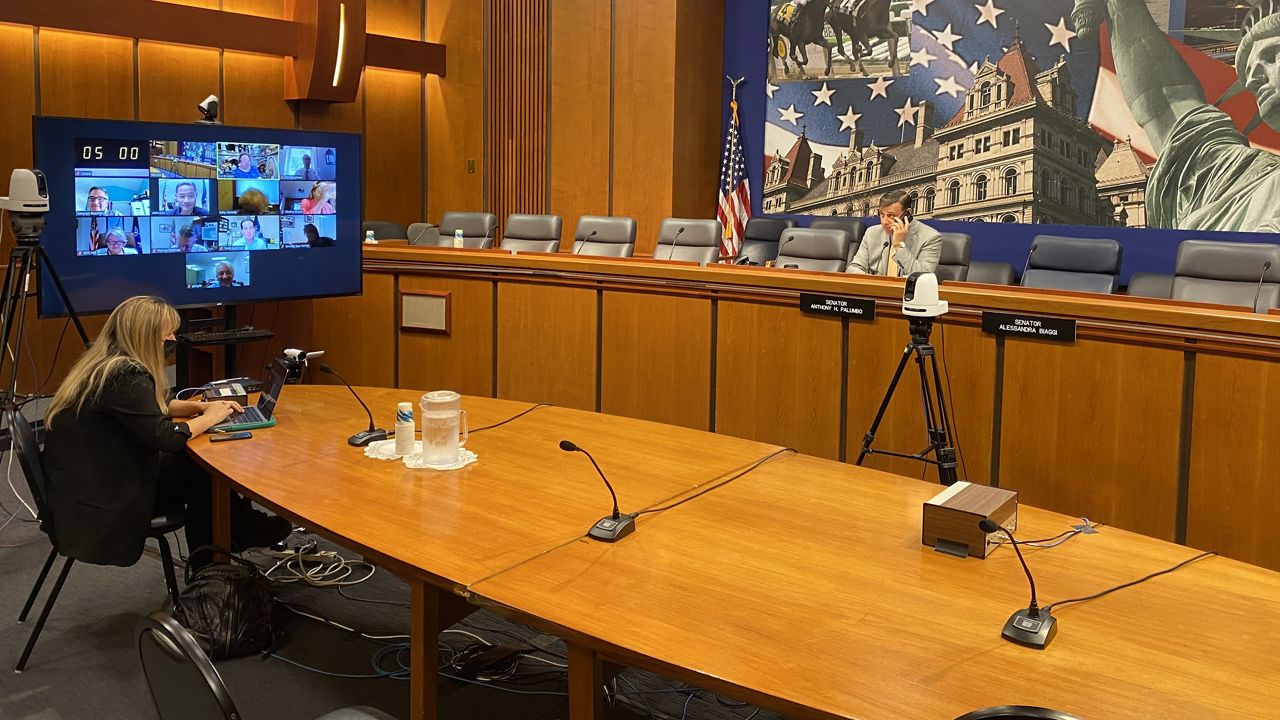 Senators 'Zooming' from home forces ethics hearing to be postponed

A highly anticipated Senate hearing on New York state’s current system of ethics enforcement was postponed an hour after it was already scheduled to start.

The Senate Ethics Committee convened a hearing that was supposed to be a hybrid model, half zoom and half in person.

However, since most of the senators were Zooming in from home, concerns were brought up that this hearing was in violation of the state’s open meetings law.

Republican Senator Anthony Palumbo was one out of two lawmakers that made the trek to Albany for the hearing.

“We have two majorities that are looking to ‘fix the system’ and we can't even get the public hearing right,” Palumbo said. “I mean this is embarrassing. It's really unfortunate.”

Palumbo said Republicans were never alerted about the hearing being switched to partially in person and said more members would have showed up.

Senate Democrats control the hearing since they are in the majority.

“We discovered this, our staff did, from the Senate website that it would now be in person about I think it was two days ago and I just, fortunately was able to scramble together and find suit pants,” Palumbo said.

According to the open meetings law, the public needs to be able to "attend ... any site at which a member participates."

Pre-pandemic, lawmakers would at times virtually conference into a hearing from a scheduled publically accessible room, for example in New York City.

But since lawmakers were zooming in from their living room, theoretically under the open meetings law, the public should be allowed in there too.

During the height of the COVID-19 pandemic, Governor Andrew Cuomo suspended the open meetings law in order to reduce the number of in-person gatherings. But by lifting the state of emergency, he also lifted the rules that allowed members to virtually conference in from home.

Chair of the Ethics Committee Alessandra Biaggi said it is unclear if a Senate hearing of this type would fall under the Open Meetings Law, but out of an “abundance of caution” the hearing would be rescheduled.

‘We are going to postpone it until we have clarity around that,” Biaggi explained. Once we do, then we will move forward because this hearing is happening. It's very important that it happens. The issue of JCOPE and how they operate is obviously one of central importance to the people of New York.”

One of the goals of this hearing was to find ways to reform and replace the state’s current ethics watchdog entity, the Joint Commission on Public Ethics or JCOPE.

JCOPE has drawn widespread criticism for failing to investigate Cuomo related scandals and other sexual harassment accusations in the State Legislature.

Just recently, Senate Republicans sent a letter to JCOPE asking for an investigation into whether Cuomo used state resources to write his $5 million pandemic book, which JCOPE also approved, and if Cuomo gave preferential COVID-19 testing to family and friends.

Republicans say they never received a response to their request.

Erica Vladimer a former legislative staffer who accused now-ex IDC leader Senator Jeff Klein of sexual harassment, was scheduled to testify at the hearing in support of replacing JCOPE.

“Right now, JCOPE, the legislative ethics commission, they are all subject to the same backroom political negotiations during the budget from the people that they are supposed to be overseeing and holding accountable,” Vladimer explained. “That's not going to work, because if those very people are going to not fund this system adequately, how can we expect them to do their job appropriately. So it's going to take a huge overhaul.”

There is no date scheduled yet for when this hearing might be taking place next.