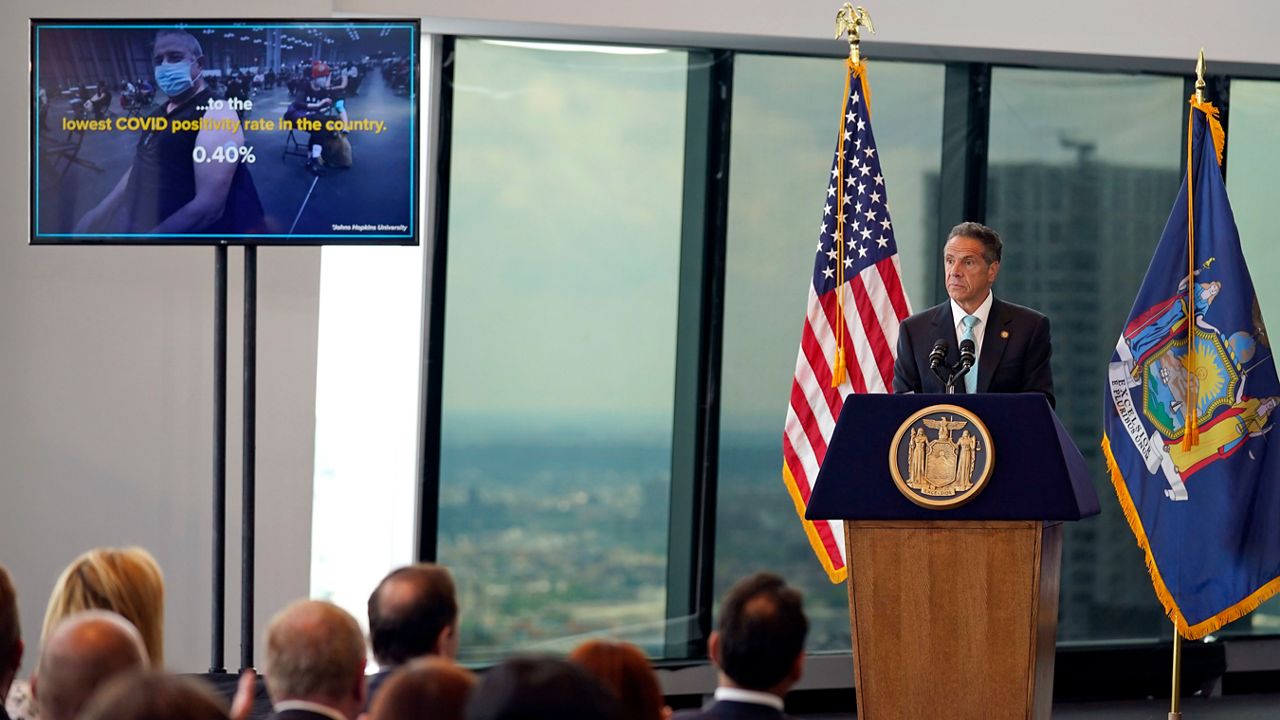 New York state of emergency remains in place, and with it, many of Cuomo's pandemic powers

The first confirmed COVID-19 case in New York was announced on March 1, 2020. And what ensued after, no one was fully prepared for.

With a rapidly changing, ever-evolving situation at the time, the state Legislature decided to grant Gov. Andrew Cuomo broad emergency powers that let him immediately override any local and state law.

New York went on pause and New Yorkers stayed home, all doing their part to curb the mounting number of COVID-19 cases and deaths.

Now well over a year later, 70% of adults 18 years old and older have now been partially vaccinated in New York. COVID-19 cases have been on the sharp decline. And now, even most COVID-19 restrictions have been lifted, marking a significant milestone in the state’s fight against the virus.

However, the state of emergency has remained in place, allowing the governor to retain much of his emergency power.

“It should have been done months ago,” state Assemblyman Chris Tague said about lifting the state of emergency. “You know, this is what happens when you have one-party rule in Albany, and so to speak, one-person rule.”

The state Legislature did move to scale back some of the governor’s emergency powers once many of the scandals facing Cuomo came to light. This includes the numerous sexual harassment allegations, the potential cover-up of COVID-19 related nursing home deaths and more.

Gov. Cuomo has maintained that he is innocent of any wrongdoing. However, the Democrat-controlled Legislature made moves to inch back Cuomo’s broad powers in what was seen as a slight rebuke.

Cuomo is able to maintain and control many of his current executive orders, however, when he wants to extend them, he is required to give legislative leaders notice.

The Legislature can also vote to terminate the state of emergency by a simple majority vote.

“It's really these extraordinary powers that he continues to have post April 30,” Blair Horner with the New York Public Interest Research Group said. “Now the question really is, does he continue to need them given that the pandemic is waning? But the pandemic is not over.”

New York is not completely out of the woods yet, but Horner said moving forward, decisions surrounding pandemic restrictions should be more transparent.

“The Legislature should hold hearings and have the governor's counsel in public discuss with them what changes the governor has advanced and how best to implement rolling them back or at least making them subject to legislative approval,' Horner said.

Meanwhile, there are certain COVID-19 restrictions that will remain in place, such as mask wearing in grade schools, public transit and healthcare settings.

Some of those rules, Assemblyman Chris Tague said, should also be looked at by the Legislature.

“To see these little kids in kindergarten through second or third grade, they're afraid that if their mask goes down below their nose, they're going to get in trouble,” Tague said. “And these poor little things, the snot just coming right out of their nose in 80, 90 degree weather and the school doesn't have adequate air conditioning, it's just absolutely ridiculous.”

Cuomo has issued over 100 pandemic-related executive orders since the state of emergency began March 7, 2020.