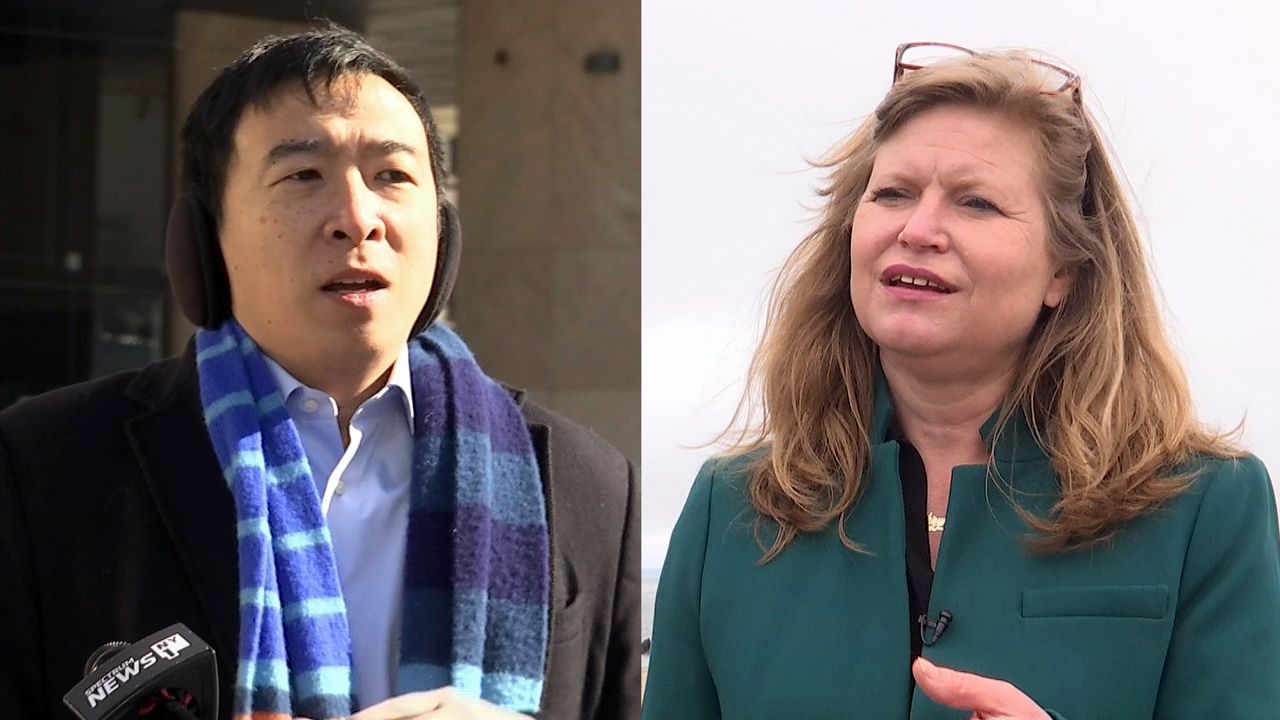 Andrew Yang says he'd hire Kathryn Garcia to work for him. She says it should be the other way around.

NEW YORK — Andrew Yang says vote for him for mayor and he’ll put Kathryn Garcia in his administration.

“I think Kathryn and I would make a fantastic team,” he said earlier this week.

Or, Garcia says, just vote for her.

“Just cut out the middle man. I’m running for office. I know how to run this city,” she told NY1 on Friday.

Having served in two administrations, most recently as Mayor Bill de Blasio’s sanitation commissioner, Garcia has years of government service that Yang does not.

But Yang, the race’s frontrunner, hasn’t needed to introduce himself to New Yorkers as Garcia has.

“Even if you don’t know me, you know my work,” Garcia said at an Asian American Federation mayoral forum earlier this week. “I was there pumping out flood zones during Hurricane Sandy. I plowed our streets, picked up the trash.”

It’s clear that Yang sees Garcia’s resume as plugging the holes in his own. He’s praised her effusively and said he’d vote for her after himself.

He told the New York Post editorial board that, if elected, others would handle the day-to-day operations while his role would be part administrative, part marshaling private-sector resources and part, “cheerleading for a recovery.”

Garcia responded: “The job of mayor is more than cheerleader — you’ve got to be a cheerleader for this city — but you actually have to make really tough decisions, day in and day out, and you can’t delegate that to a deputy mayor.”

Gender has an undeniable role in the discussion.

Yang himself has said he wants to see the glass ceiling broken.

“I do think we’re overdue for a woman mayor,” he told WBAI Radio last week.

Additionally, Garcia was the first among the candidates to call for Scott Stringer to leave the race amid sexual harassment allegations. Maya Wiley and Dianne Morales have since done so.

“Not usually women in office being accused of it. So I’d say it’s time for a change,” Wiley added on Thursday.

Yang had a rare day off from the campaign trail Friday and offered no further comment.

Garcia was meeting with business leaders in the Bronx.

“There’s a perception that women are No. 2, not at the front. But that should change,” she said.

She made Yang this offer: “I am looking to win this race and then he can serve in my administration.”

Of the women in the race, Wiley is polling the highest.

But they all remain mired in single-digit support.