That's the message that President Joe Biden and some of his closest surrogates, including first lady Dr. Jill Biden and Vice President Kamala Harris, will attempt to get across as they kick off an ambitious, cross-country tour to highlight the benefits of the recently-passed $1.9 trillion plan to defeat the coronavirus and boost the economy.


The purpose of the tour is to “engage directly with the American people” in order to explain how the plan will benefit individuals and businesses across different sectors of the economy, White House press secretary Jen Psaki added during Monday’s briefing.

"We recognize that signing the bill is just a first step and getting the money out the door, ensuring people know how they can benefit, how it will help their local communities is an important part as well,” she said.

The road show – dubbed the "Help is Here" tour by the White House – began with first lady Dr. Jill Biden’s visit to New Jersey, where she was greeted by Gov. Phil Murphy as she toured Samuel Smith Elementary School.

Dr. Biden was given a walk-through of how students enter the school with new coronavirus precautions, which includes a temperature check and a separate, isolated room for anyone showing symptoms of the virus.

“Hello, nice to see all of you,” Dr. Biden said to several students playing a computer learning game called Cloud Review. “I’m a teacher too, but I teach English. Tomorrow I will be doing the exact same thing with my students." 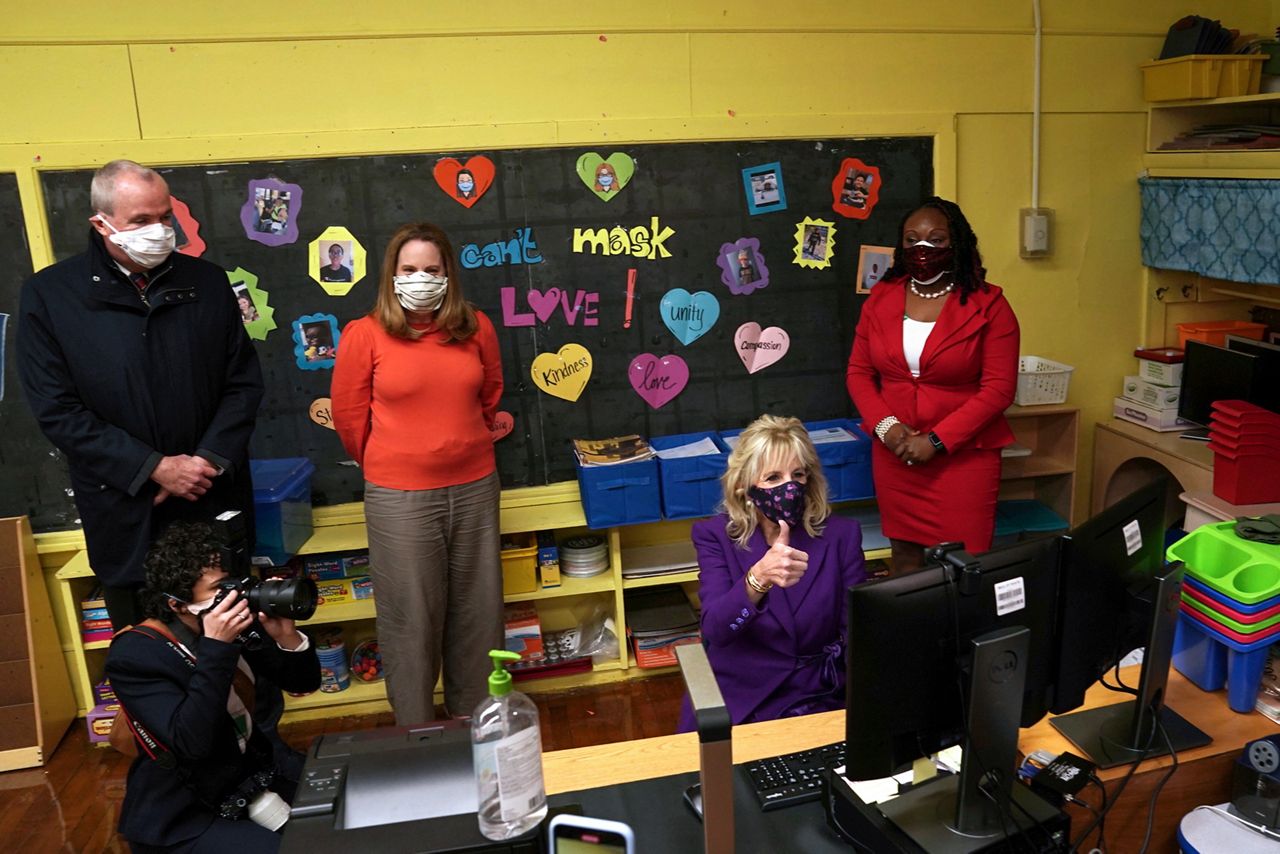 The first lady was joined by several other lawmakers to give remarks following the tour, including Rep. Andy Kim, and Sens. Cory Booker and Bob Menendez.

Menendez, who was thrilled to welcome "back a Jersey girl" in Dr. Biden, who was born in Hammonton, NJ, said that "we are so fortunate having an accomplished and passionate educator as First Lady."

The state's senior senator lamented the struggles that come with virtual learning, including increased isolation ("Many children have fallen behind especially, in low income and minority communities," he said.) but noted that "there’s a light at the end of this long tunnel."

Sen. Booker used his time to thank President Biden for championing the American Rescue Plan, saying the president led with “incredible heart through the crisis.” Booker also pointed to the earned income tax credit and child tax credit included in the package as a “step in the right direction.”

An extension of federal unemployment benefits will continue through Sept. 6 at $300 a week. There's $350 billion for state, local and tribal governments, $130 billion for K-12 schools and about $50 billion to expand COVID-19 testing, among other measures.

“Congressman Kim, and Senators Booker and Menendez, it's because of your hard work that we were able to pass, to rescue the country from this pandemic, and begin rebuilding our communities,” Dr. Biden said Monday. “It's going to take leadership at all levels to get us through this.”

Dr. Biden said that boosting accessibility to child care and education are important issues to her and President Biden.

"You know, my husband Joe has been a single dad, and he knows how important it is to keep kids safe, and he’s going to make sure that all families have the choices they need to get the childcare that they need," she said.

President Biden also touted the American Rescue Plan from the White House on Monday afternoon, saying the legislation is "already doing what it was designed to do: make a difference in people's everyday lives." Biden named Gene Sperling as "stimulus czar," saying the massive stimulus package will require “fastidious oversight” in order to distribute the funds efficiently and equitably.

“I spoke with Gene earlier today, alongside my economic team, he’s ready to get to work,” Biden said. “In fact, he's already hit the ground running. And together, we're gonna make sure that the benefits of the American Rescue Plan go out quickly and directly to the American people, where they belong.” 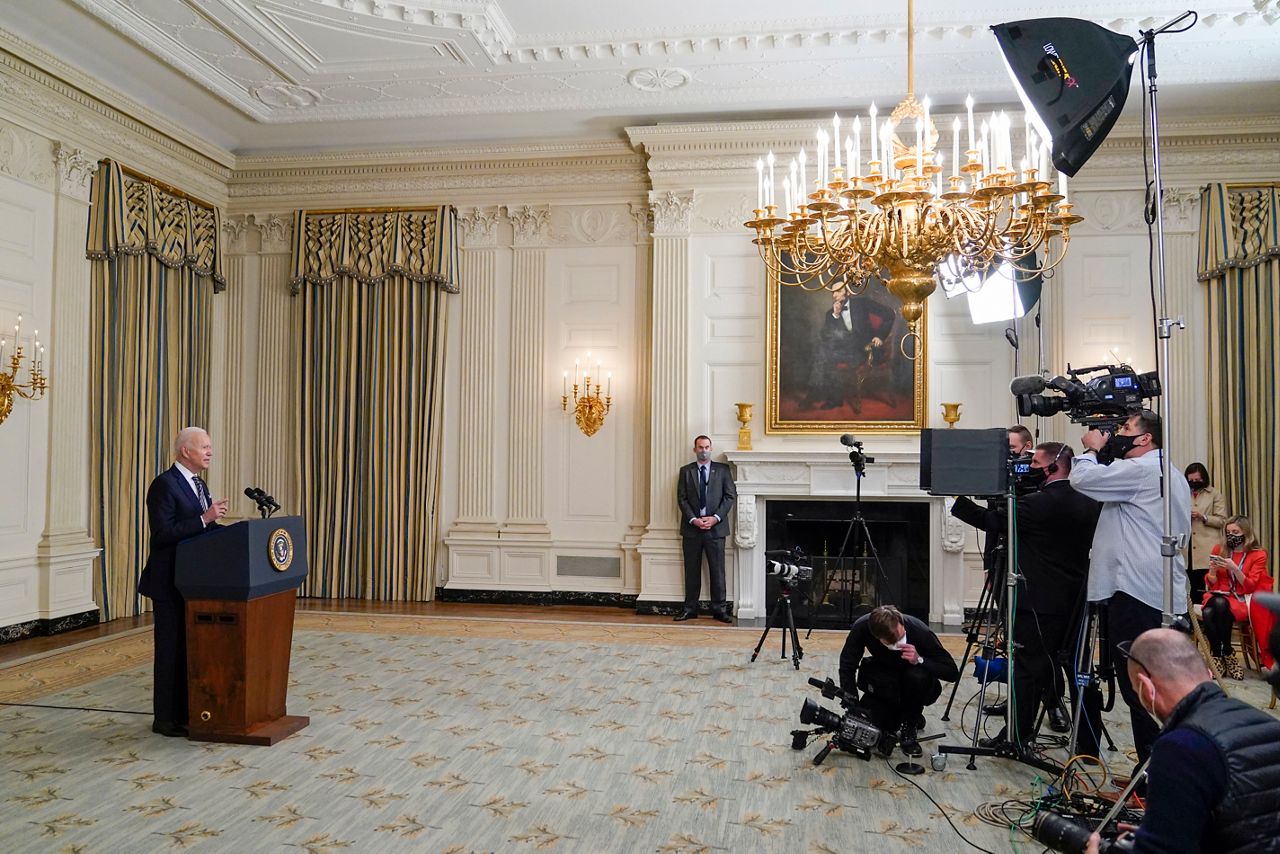 "Help is here, and hope is here, in real and tangible ways," the president added.

Vice President Harris and her husband, Doug Emhoff, set off on their own leg of the tour in Las Vegas, Nevada on Monday afternoon. The couple was greeted by Gov. Steve Sisolak when they touched down, and chatted for several minutes before Emhoff and Harris loaded into separate cars for the day’s events.

Harris was whisked off to the University of Nevada, Las Vegas to observe their vaccination process, where she watched as vaccinators retrieved doses of Pfizer and Moderna’s vaccines from their vials and placed them into syringes.

The vice president also watched as nursing student Mailani Thompson received a dose of the Moderna vaccine, telling the vaccinators: “You all are the heroes of this moment.”

“Thank you for being in the most noble profession,” she added. 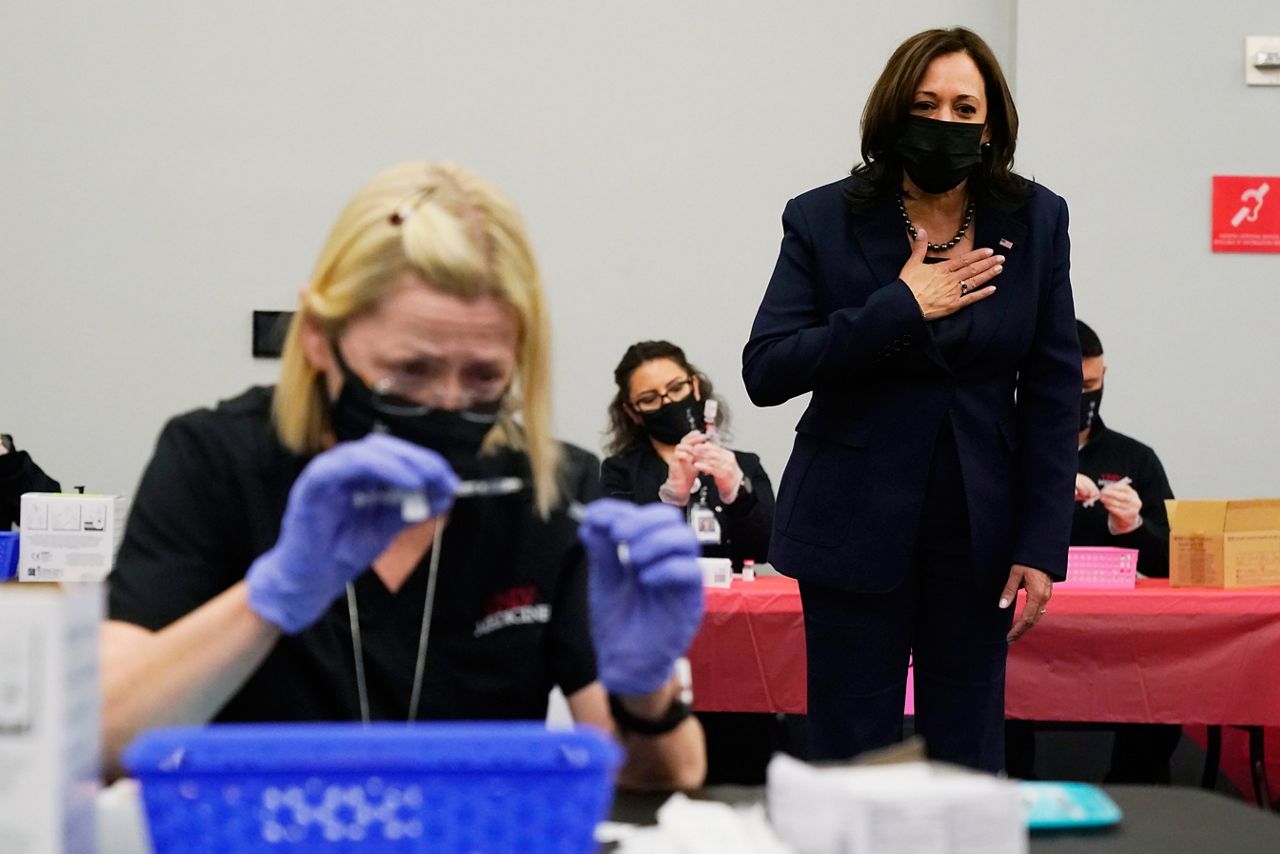 The president plans to visit a small business in Delaware County, Pennsylvania, on Tuesday, while Harris will meet with small-business owners in Denver the same day. The two are slated to appear together in Atlanta on Friday.

In addition to the president, vice president and their spouses, Cabinet secretaries will also be out on the tour. Hundreds of mayors and governors, including Republicans, are being lined up to give interviews to discuss what the plan means for their communities.

Biden has said President Barack Obama's administration, in which Biden was vice president, failed to adequately educate the public about the benefits of its economic recovery plan