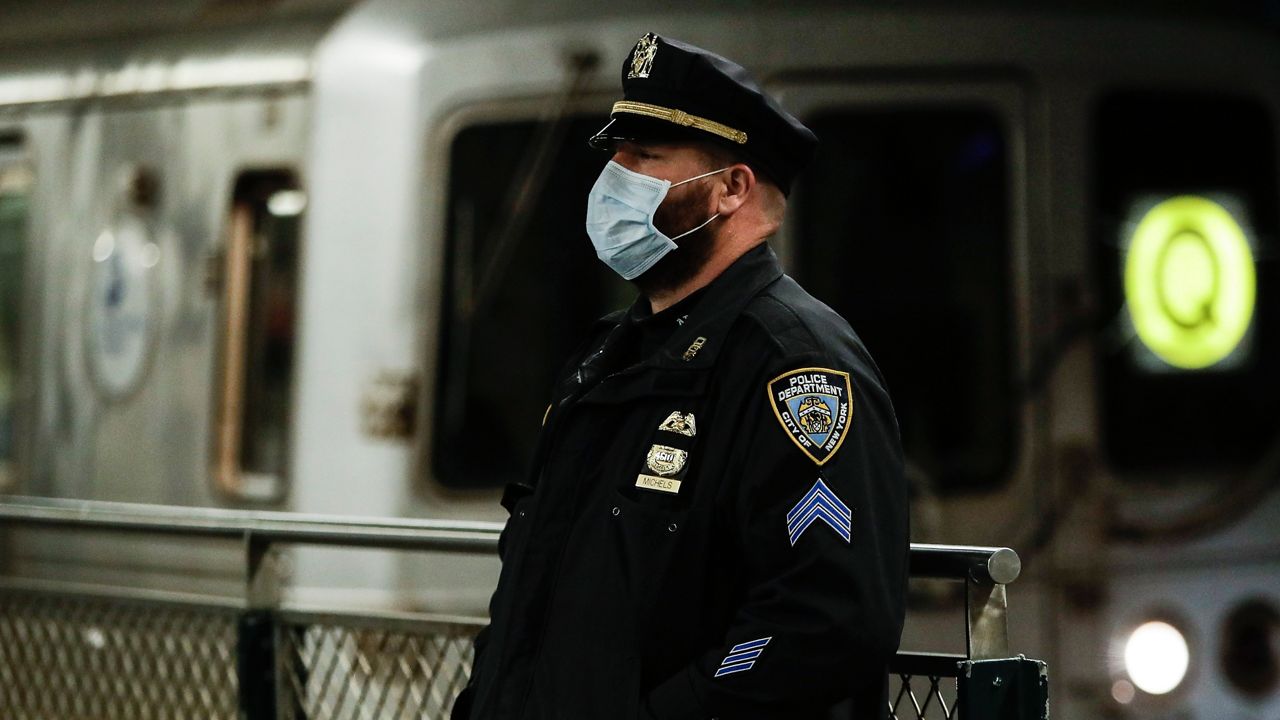 A May 5, 2020, AP file photo of an NYPD officer at the Coney Island subway station in Brooklyn.

“We needed to put 500 more cops into the subways immediately to show people that we are going to keep them safe, keep confidence high that people could move around the city safely,” de Blasio said in his weekly “Mondays with the Mayor” interview on Inside City Hall. “I think it’s really important that people see that they are being protected.”

The suspect in the case, 21-year-old Rigoberto Lopez, was charged with first-degree murder, second-degree murder, and attempted murder in a Manhattan court on Monday. All four attacks took place over a 14-hour stretch between Upper Manhattan and Far Rockaway on the A line.

The NYPD immediately deployed an additional 500 officers to the transit system in response to the incidents, and the MTA wants another thousand to lift the NYPD's Transit Bureau to nearly 4,000 officers, the same as in the 1990s. Even with the city’s spike in violent crime in 2020, New York City’s crime rate was much higher in the 1990s, but transit officials are calling for more officers to patrol the trains. The six murders in the transit system last year were the most since at least 1997.

Although activists and some elected officials in recent years have raised red flags about sending too many officers underground, de Blasio told NY1 he backs having more officers in the subway system.

“Talking to our police officers, what I’ve heard, Errol, they hear constantly from straphangers how reassured they are to see the police presence,” the mayor said in his interview on NY1. “We’re going to do whatever it takes to keep the subway safe and to show people they can be safe, they can be comfortable.”

Police said the alleged assailant who stabbed four homeless people on the A train line on Friday and Saturday had four past arrests and was previously hospitalized for mental illness. Lopez was listed as last living in a Boerum Hill shelter.

As a result, officials and advocates are renewing calls for the city to increase its resources, services, and outreach for those battling serious mental illness.

“By my count, myself and the chairman have asked the city for additional policing and mental health assistance more than 30 times in the last 18 months," Sarah Feinberg, interim president of New York City Transit, said Monday.

Meanwhile, the city’s flagship mental health initiative, ThriveNYC, has been criticized for its lack of transparency and failure to target serious mental illness. ThriveNYC is dedicating more funding to its crisis prevention and response task force in upcoming years.

In his interview on NY1, the mayor conceded that more investment in services for homeless and mentally ill New Yorkers is needed, but he rejected arguments that the city hasn’t done enough during his time in office.

“We’re sending hundreds of outreach workers into the subways regularly to reach folks who happen to be homeless. It’s actually been very successful,” de Blasio said. “They’ve had amazing success getting people into where services are.”

The mayor also pointed to recent efforts to change who responds to 911 calls of mental health crises, saying the city is continuing to send more social workers and medical professionals to respond to such emergencies instead of the NYPD when there is no indication of violence.

Watch the full "Mondays with the Mayor" interview above.

This story includes reporting from Emily Ngo and Dan Rivoli.