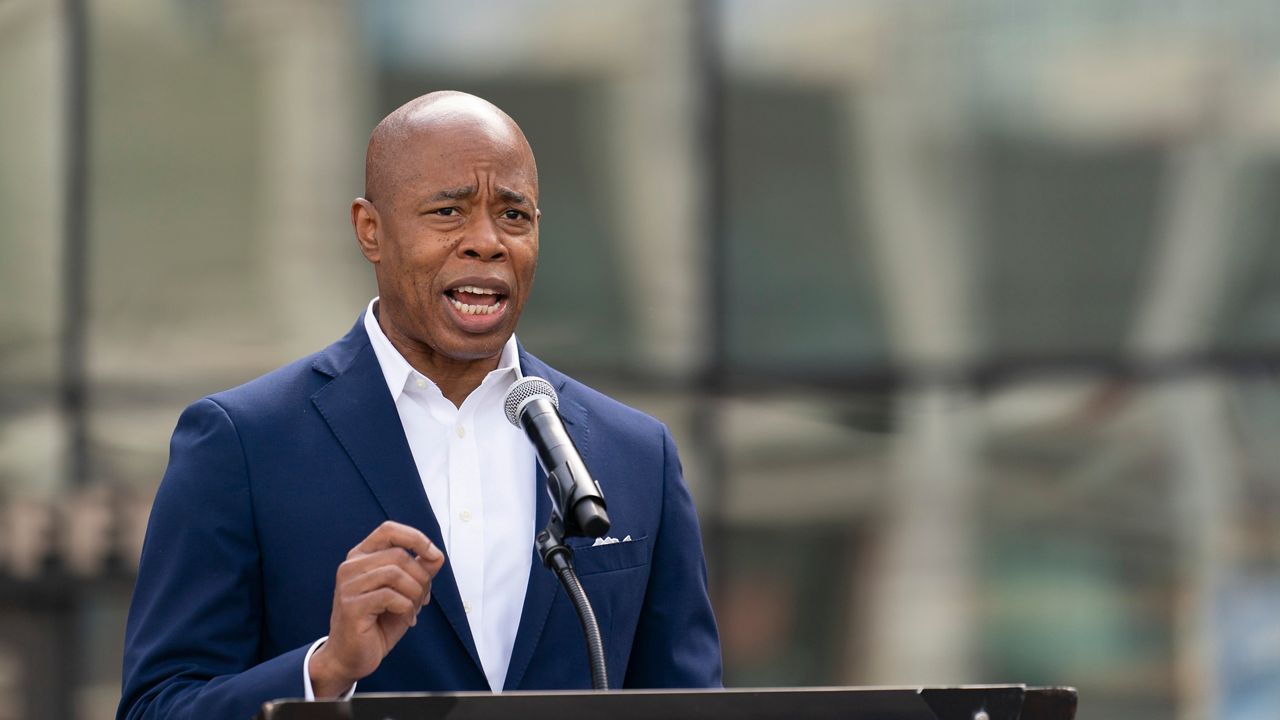 A September 1, 2020, file photo of Brooklyn Borough President Eric Adams announcing that the Barclays Center will be an early voting site. Mark Lennihan/AP.

The race is expected to be like no other in recent memory, given the limitations on campaigning as a result of the ongoing coronavirus pandemic.

That much was evident during Adams's announcement, which was initially planned to be an outdoor event with a small crowd of supporters but had to be canceled and moved to the safety of a live stream, away from crowds as the city's COVID-19 infection rate continues to creep up.

"This virus may keep us from being together today, but it will not keep us from joining together to make this city a better place," Adams said during a Zoom meeting with supporters and volunteers who joined as he announced his campaign.

In a campaign video released late Tuesday night, Adams highlighted his experience as a police officer, and said he could keep New Yorkers safe, while helping the city rebound from the coronavirus pandemic and a deepening fiscal crisis.

Adams kept to those same themes during his campaign speech on Wednesday.

"We have lost nearly 25,000 New Yorkers to this virus and hundreds of thousands of jobs," Adams said. "And we are still losing. Infection rates are back up to dangerous levels. This fight is far from over. Every week without a job, a family goes deeper into debt. Every school day a child can’t get proper instruction, she or he loses a little bit of their future. And it is Black and Brown New Yorkers who are losing the most."

Adams, 60, is no stranger to New York City politics. He was elected Brooklyn borough president in 2013 after serving in the state Senate for four terms. As borough president, he has been known for championing small businesses and the needs of immigrant communities, while also gaining attention for his shift to a healthy lifestyle, about which he recently published a book, "Healthy at Last.”

Prior to being elected to public office, Adams spent 22 years in the NYPD. In 1995, he helped establish the group 100 Blacks in Law Enforcement Who Care, an advocacy group that works to improve relations between the Black community and the NYPD.

Adams is expected to make his previous career as a police officer and his support for both reforming the NYPD, while highlighting the need for a robust public safety plan, into a cornerstone of his campaign.

"During my 35 years as a police officer, community organizer, and elected official, I have seen what works and what doesn’t in New York," Adams said. "Part of our city has leaped into the 21st Century while too many other parts have remained in the 1970s, and it is lower-income New Yorkers and others dependent on city services who have been left behind."

The announcement also included a handful of early endorsers, including Councilmember Daneek Miller, a former city bus driver who represents parts of Queens, who highlighted Adams's work as a police officer. He was also endorsed by Councilmember Laurie Cumbo, who highlighted his response in Brooklyn in the aftermath of the pandemic.

"We will turn our pain into purpose. And just as we have overcome our personal struggles separately, we will also overcome this great adversity together," Adams said, citing the city's current economic crisis as a result of the pandemic.

Adams, likely to benefit from the perch he holds now in the borough president's office, said he will roll out detailed policy proposals over the coming weeks.

In his campaign video, Adams detailed his childhood in Jamaica, Queens, and an episode in which he was a teenage victim of police brutality. Adams said he was arrested with his brother and subsequently beaten by an officer in the basement of a police precinct in Queens.

"Some people talk about police brutality, I want to tell you how it is to live through it," Adams said while standing outside the 103rd Precinct in South Jamaica. "That was a dark place, my life could have gone a different way, full of bitterness. But I had people who loved me and a determination to change things."

Adams leads the city’s most populous borough, which is also home to a majority of Black New Yorkers — a voting constituency that would be essential to delivering a win. As the race for mayor heats up, Adams’s current position could provide a significant advantage in a field that includes several newcomers with little name recognition or political experience. However, his time as a member of the city's political establishment could also become a challenge, especially if voters seek change and more progressive candidates during a time of deep crisis and economic instability.

The mayoral field so far includes:

Other candidates who have yet to make a formal announcement but are expected to announce a run soon include former sanitation commissioner Kathryn Garcia, former Bloomberg and Obama administration official Shaun Donovan, and nonprofit executive Dianne Morales.