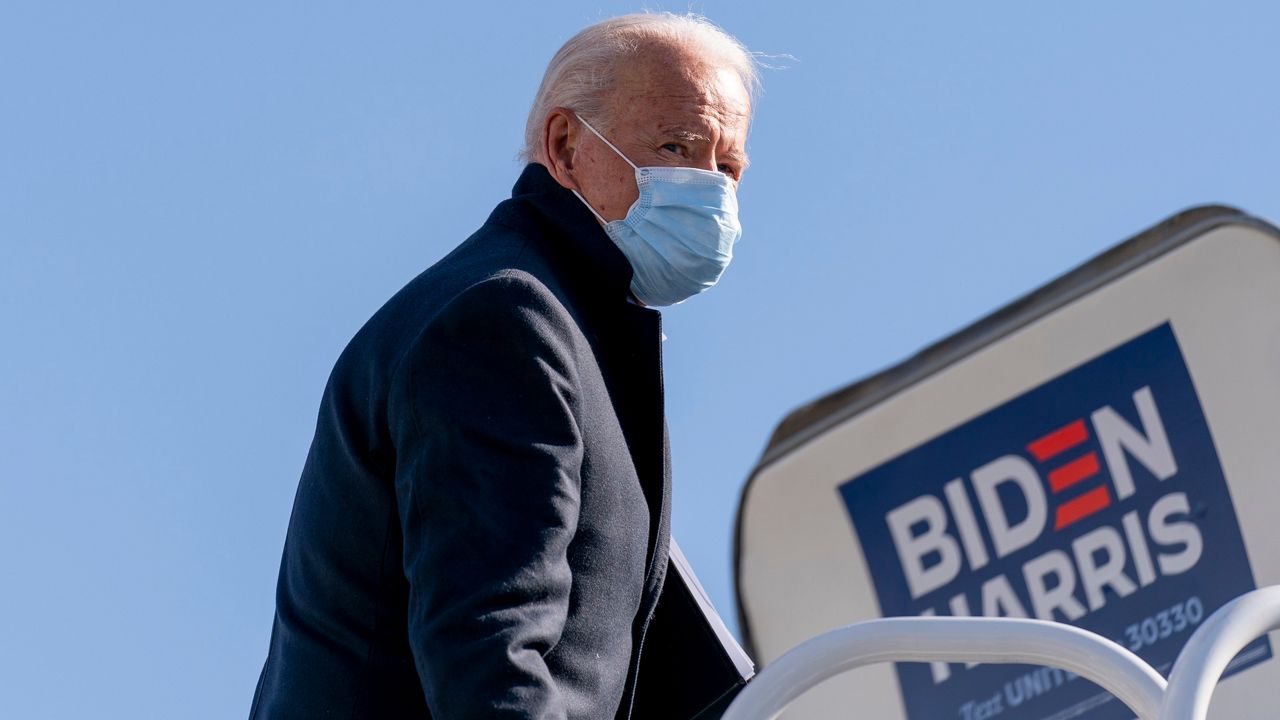 Joe Biden boards his campaign plane in Wilmington, Deleware, on November 2, 2020, to travel to Cleveland for a rally. Andrew Harnik/AP.

NEW YORK — On the eve of Election Day, Mayor Bill de Blasio says he thinks the future of the city and its recovery is riding on Joe Biden winning, and that he believes a stimulus deal would be done quickly if he wins.

“If Joe Biden is elected president, the most likely time for a stimulus is February. And I’m thinking along the lines of a New Deal,” de Blasio said in a Monday night interview with Inside City Hall anchor Errol Louis.

The mayor did not mention the fight over the U.S. House and Senate in the interview on NY1. Republicans in the Senate, led by Majority Leader Mitch McConnell, have frequently blocked House Democrats’ efforts to pass another coronavirus relief package. One of the sticking points has been how much direct aid should be given to states and cities, with Democrats wanting the federal government to give much more money to localities.

While the House and Senate were able to hammer out stimulus bills earlier in the year, Democrats may need more than the presidency to get the aid localities like New York want; retaining the House and flipping the Senate may prove instrumental to any stimulus package.

But, like much of the nation, de Blasio in the interview was primarily focused on the presidential race, and he indicated he would be more confident in a COVID-19 vaccine under a Biden presidency than Trump’s. The mayor said there will be “a vaccine we can believe in” if the Democrat wins.

“You’re going to have a vaccine that the federal government can actually promote to people in a believable fashion,” the mayor said about a Biden win.

De Blasio gave a slew of optimistic predictions about what 2021 would look like. Despite an uptick in coronavirus cases in the city, the mayor forecasts that the worst of the pandemic is behind us. He also predicted that “a lot of people” will be vaccinated in the first half of next year and that 2021 will be an easier year, despite medical experts warning that distribution of a vaccine will take much of next year. Overall, he said he didn’t agree with experts who say we won’t be back to normal for most, if not all, of 2021.

The mayor’s cheery prognostications came on the day the NYPD released gloomy crime statistics for October. Year to date, murders are up 37.2% and shootings have increased by 121%.

But de Blasio — who has consistently tied the spike in violent crime to the cascading negative impacts of the pandemic, such as the huge unemployment numbers in the city — had another prediction: crime rates in the city will not be as high next summer if Biden wins and tackles the pandemic.

“I think you’re going to see by the summer, which is historically the time when we deal with the biggest crime challenges, a very, very different reality in this city if Joe Biden is elected president,” de Blasio said.