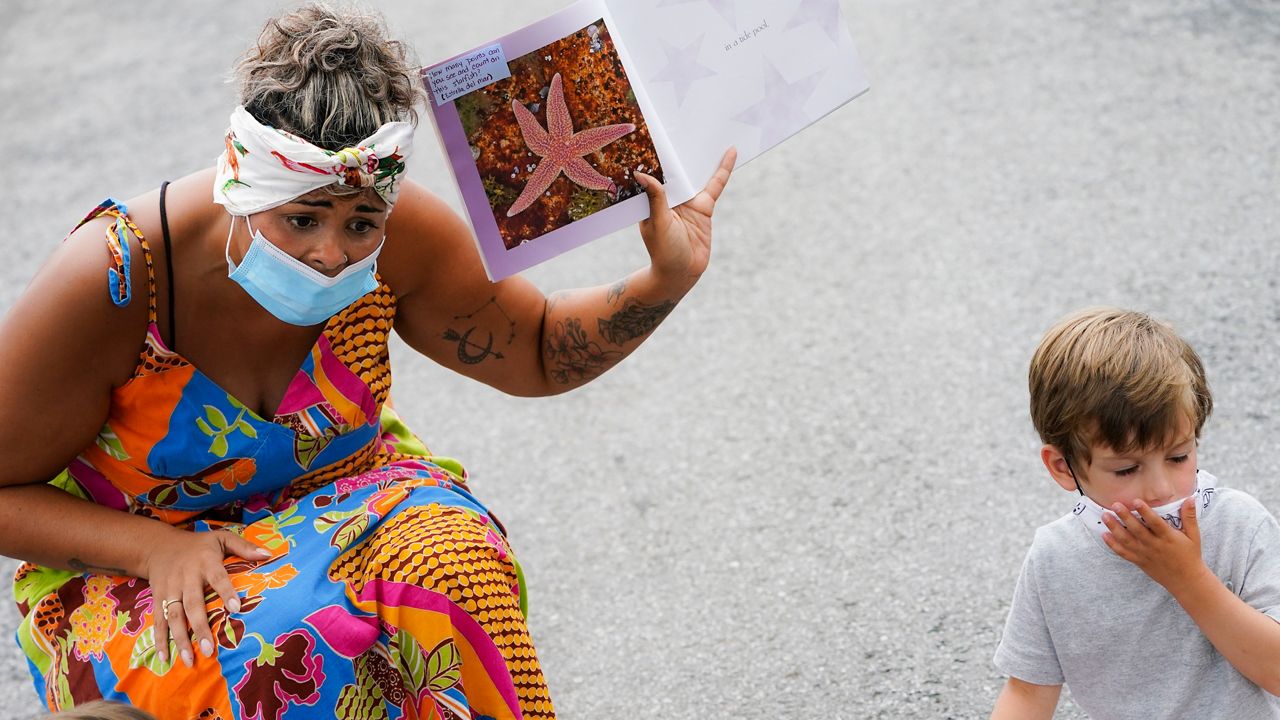 A September 2, 2020, file photo of pre-school teacher Mikki Laugier wearing a protective mask as she guides students in a lesson as they participate in an outdoor learning demonstration at P.S. 15 in Brooklyn. John Minchillo/AP.

There’s No Hard Number on How Many Teachers Schools Will Need, de Blasio Says

NEW YORK — Mayor Bill de Blasio says he doesn’t know how many teachers the city will need for its blended learning plans as the academic year begins for the nation’s largest public school system.

“I don’t blame anyone who finds this confusing. Because it is so multi-layered, it does not lend itself easily to a single hard number,” de Blasio told Inside City Hall Anchor Errol Louis on Monday evening. “But we’re also dealing with the fact that the numbers keep changing.”

In his weekly “Mondays with the Mayor” interview on Inside City Hall on Monday, de Blasio said the city cannot set a single number on hires because there are many variables, such as how many students later decide to learn only remotely and how many teachers cannot work because of medical complications.

“So the answer we’ve come up with is to create a larger number than, honestly, was originally anticipated, because we need a more flexible system,” de Blasio told NY1.

To that end, according to de Blasio, the city now plans to increase the number of additional hires — currently set at about 4,500— by utilizing thousands of education department staff with teaching experience, by bringing on roughly 5,500 certified substitute teachers who have substituted before and by bringing on former teachers.

It’s a reversal of the mayor’s previous stance. Initially, he had disputed the assertion that schools needed a surge in hires after the city agreed to bring on an initial 2,000 extra teachers. But then on Thursday, just days before school buildings were set to open, he announced in-person classes would be delayed due to fears there would be a staffing shortage.

Teachers and their unions had insisted for weeks there were not enough teachers for the blended learning plan, which sends in-school learners to classrooms about three days a week and remote learners into virtual classrooms. They argued that the plan required more teachers than planned for since an educator cannot teach remote students and in-person students at the same time. Union leaders have estimated the city education department needs 10,000 more teachers to run its blended learning program.

When NY1 asked United Federation of Teachers (UFT) President Michael Mulgrew on Thursday night if staffing shortages would again become obstacles in a few weeks, Mulgrew said the 4,500 teachers are only for 3-K, pre-K, and K-8 students. According to the union boss, officials will need to determine how many more hires will be needed to educate older students.

De Blasio told NY1 the city had enough teachers for the first day of in-person learning Monday for 3-K, pre-K, and District 75 (special education) classrooms, but the numbers will grow by the first day of school for the rest of the public school system.

De Blasio: Trump Has ‘No Legal Leg to Stand on’ to Pull Federal Funds from NYC

In his interview with Inside City Hall, de Blasio also ripped into the Department of Justice for labeling New York and other cities “anarchistic jurisdictions,” rendering each of them eligible to lose federal dollars. The Trump administration is threatening to withhold more than $7 billion in funding to New York City, claiming it has failed to quell violence in the streets and is not adequately supporting its police department.

De Blasio scoffed at the claim. He deemed the move “a game” and said he has seen no anarchy.

“It’s pitiful that the president of the United States and his Justice Department would call this a city of anarchy. It’s laughable. It’s just literally laughable. So no, they don’t have a legal leg to stand on. And they’ve tried these kinds of bluffs before and nothing comes of it. And he may not even be president much longer,” de Blasio said. “Our corporation counsel, Jim Johnson, said it best: this is just blatantly unconstitutional. And if they try to withhold money that was duly authorized and allocated by the Congress, they’ll lose immediately in court. So I don’t think it’s more than a political stunt.”

A NY1 review finds that Trump’s use of New York as a political foil has grown in frequency and intensity as the election draws closer. He misrepresents the city as crime-infested as he bills himself as the law-and-order candidate. In New York, murders, burglaries, and shootings are up this year compared to last. But overall, crime is down. And as of earlier this month, major crime last year under de Blasio was 41 percent lower than in 2001.

De Blasio theorizes the president is trying to pull federal funds from the city to pump up his base in Republican states and spark fear and hatred.

“What he’s trying to do is get his political base to say, ‘Look, he’s sticking it to these liberal cities, these Black and brown cities, these immigrant cities,’ and somehow that’s going to make people feel like he’s sticking up for them,” the mayor said. “It’s ridiculous and it’s harmful to the country. And it hurts the fabric of this nation. But he’ll do that all day long if he thinks it’s gonna win him votes.”

De Blasio says he doesn’t think counter-programming that message with a focus on tourism and the city’s recovery will make a difference with Trump supporters, but he believes most Americans understand the city is coming back.