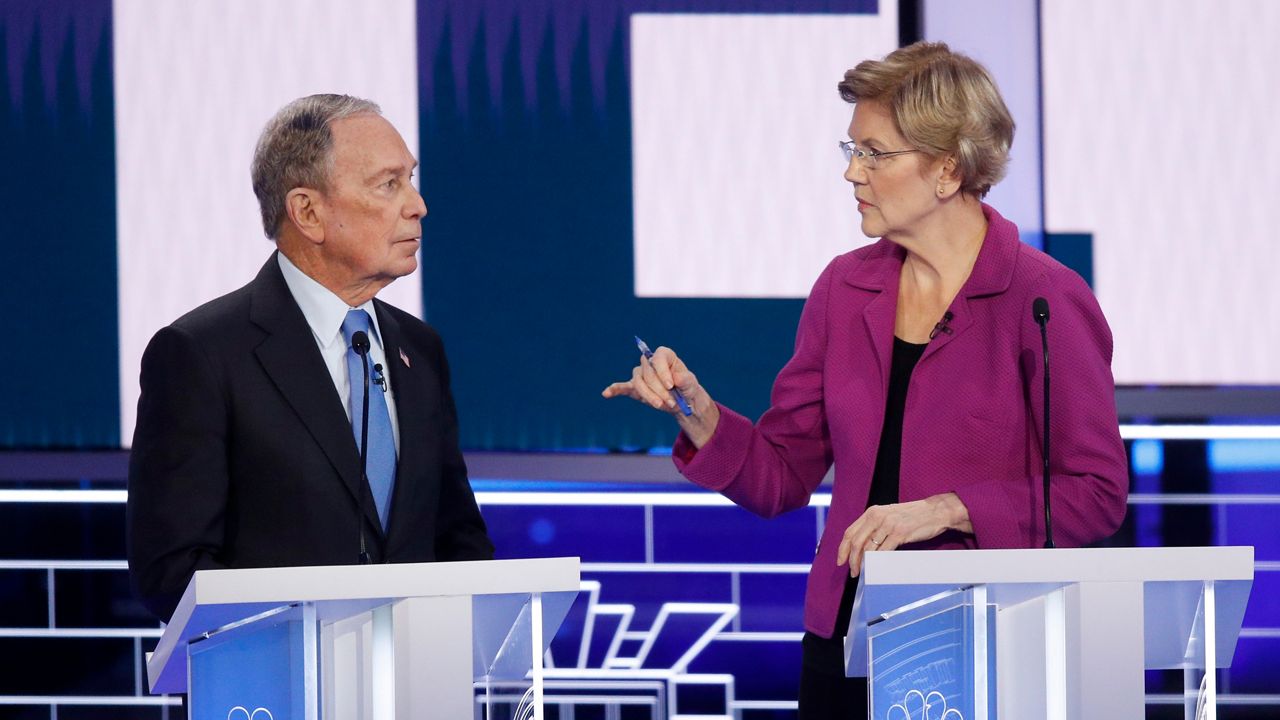 Former New York City Mayor Michael Bloomberg was frequently attacked over his previous defense of stop-and-frisk, his record on women, and his political spending in the ninth Democratic presidential debate Wednesday night in Las Vegas.

BLOOMBERG HAMMERED OVER HIS RECORD

The attacks on Bloomberg began almost immediately in the debate hosted by NBC News and MSNBC.

"Mr. Bloomberg had policies in New York City of stop-and-frisk — which went after African-American and Latino people in an outrageous way," Vermont Sen. Bernie Sanders said. "That is not a way you're going to grow voter turnout."

"I'd like to talk about who we're running against: a billionaire who calls women fat broads and horse-faced lesbians — and no, I'm not talking about Donald Trump, I'm talking about Mayor Bloomberg," Massachusetts Sen. Elizabeth Warren said.

Every candidate on the debate stage attacked Bloomberg within the first 10 minutes of the debate, bringing up several controversial parts of his record, such as stop-and-frisk. For his part, the former mayor record reiterated many of his defenses on the campaign trail: he has apologized for his support of the practice, and he is the candidate best suited to defeat President Donald Trump in November.

Bloomberg's record on women — amid a resurfaced national focus on allegations of harassment at his company and inappropriate comments some former female employees said Bloomberg levied — came into particularly sharp focus in the debate.

"None of them accused me of doing anything other than maybe they didn't like a joke I told," Bloomberg said.

Warren demanded the mayor promise to release former women employees at Bloomberg L.P. from NDAs if they wanted out. Bloomberg rejected the demand, instead arguing his company and campaign frequently supports the careers of women.

The wealth of Bloomberg — estimated at over $54 billion — was often a punching bag, with his Democratic foes charging the mayor was trying to buy the party's nomination. Bloomberg, who entered the race in late November, has already spent over $400 million on his campaign, much of that in a nationwide advertising blitz that has flooded the airwaves.

Bloomberg defended his vast fortune, saying it was a tool to take down Trump.

"I've been very lucky, made a lot of money, and I'm giving it all away to make this country better — and a good chunk of it goes to the Democratic Party as well," Bloomberg said.

Wednesday marked the first time the mayor faced a national audience unscripted. That audience is used to seeing the mayor in flashy campaign ads, not behind a podium amid his rivals, who have been attacking him on the campaign trail for weeks.

The former New York City mayor made his debate debut in Las Vegas at a point of heightened tensions and sharpened barbs in the Democratic primary for president.

While Bloomberg was attacked on policing policies that disproportionately hurt young men on color and his alleged mistreatment of women, Sanders, who leads the national polls by a comfortable margin, was targeted for online harassment by his supporters, his "Medicare for All" plan, and his alleged resistance to compromise.

Bloomberg last participated in a debate in 2009 as he ran for a third term as mayor.

On the ground in Las Vegas before the debate, experts said the Bloomberg campaign needed to lower expectations.

"He is going to be rusty, having not debated for 11 years, and this being his first debate under the microscope," said Aaron Kall, Director of Debate at the University of Michigan. "So he is going to get incoming from all the other candidates. So the first thing would be to not expect too much."

On Tuesday, Bloomberg qualified for the debate after getting receiving 19 percent in a new NPR/PBS NewsHour/Marist national poll of Democrats — easily exceeding the 10 percent threshold required by the Democratic National Committee (DNC) to take part in the debate. Bloomberg was second behind Sanders, who received 31 percent, up nine points since the last NPR/PBS/Marist survey in December.

But Bloomberg's qualification was a point of consternation for some party activists because the DNC at the end of January provided new criteria for a candidate to qualify for the Nevada debate:

Bloomberg previously couldn't participate in the primary debates because he is self-funding his campaign and did not meet a donor threshold. The donor threshold was scrapped for Wednesday's debate.

Although he debated in Nevada, Bloomberg will not actually appear on the state's ballot. The former mayor won't appear on a presidential ballot until Super Tuesday on March 3.

The debate comes before Saturday's Nevada caucuses and ahead of the South Carolina primary one week later. Sanders in polling well in both states.