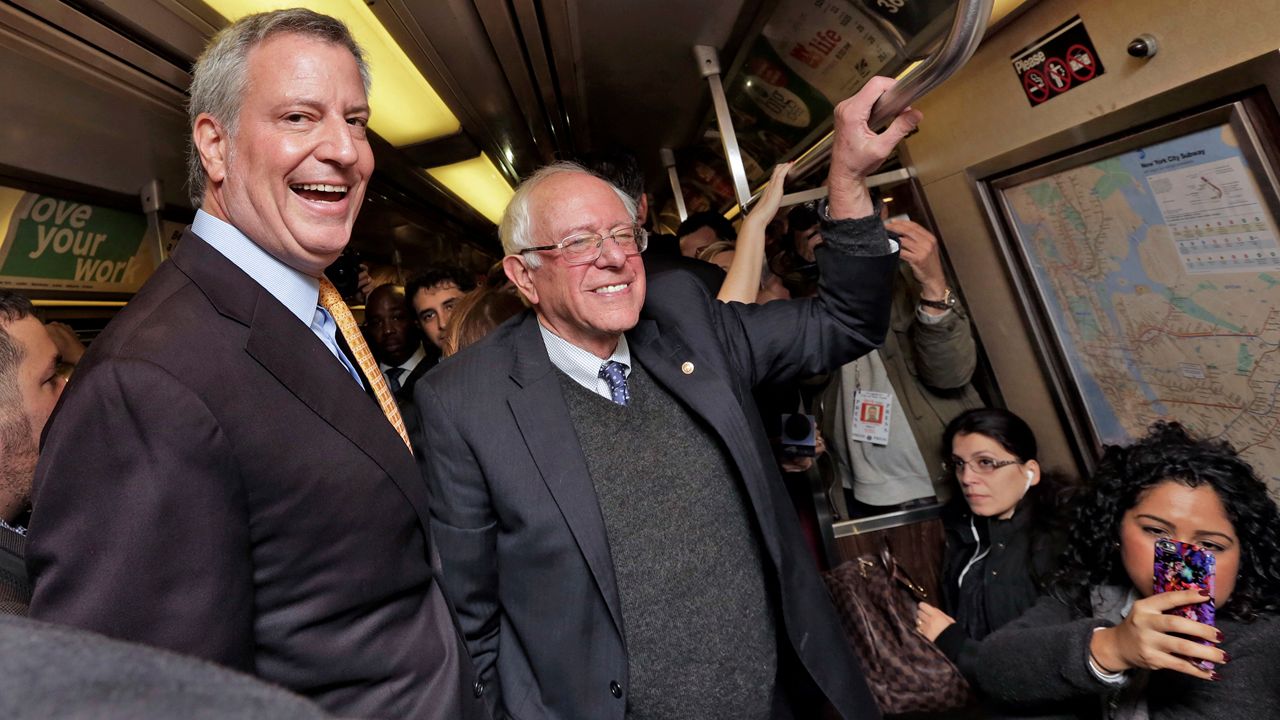 "I am standing with Bernie because he stands with working families, and always has," de Blasio said in a statement Sanders's campaign released in the evening. "New Yorkers know all too well the damage caused by Donald Trump's xenophobia, bigotry and recklessness, and Bernie is the candidate to take him on and take him down."

A SURROGATE FOR NEVADA

The mayor will travel to Nevada on Saturday and join the Sanders campaign at events in Carson City, Reno, and Las Vegas before heading back to the city on Monday, sources told NY1, just before the presidential primary debate in the state Wednesday. Sources say de Blasio and Sanders have been in touch in recent days.

Sanders, for his part, is facing an all-out fight in the Silver State. Nevada's powerful Culinary Workers' Union — which represents nearly 60,000 workers in the restaurant and hospitality industry in Las Vegas and Reno — is also the largest immigrant organization in that state, making it a key source of voter turnout.

De Blasio could serve as a helpful labor surrogate for Sanders. He has strong ties to the local labor movement there; his cousin, John Wilhelm, founded UNITE HERE! Culinary Workers Local 226.

AN EYE ON BLOOMBERG?

De Blasio is one of the most high-profile New York elected officials to endorse Sanders, joining the ranks of Queens and Bronx Rep. Alexandria Ocasio-Cortez and State Sen. Michael Gianaris of Queens, who have both canvassed for the Midwood-native across the country. De Blasio has been sharply critical of Bloomberg in the months since the billionaire joined the race.

NO NEED TO WAIT ON AN ENDORSEMENT

Perhaps learning some lessons from four years ago, de Blasio seems to be getting ahead of the endorsement game.

After Hillary Clinton announced her presidential run in 2015, de Blasio refused to endorse her for months. The mayor had managed Clinton's 2000 Senate campaign, but he spent months declining to back her as he orchestrated and ultimately failed to hold a presidential forum with the Democratic candidates.

Although he eventually endorsed Clinton and even campaigned for her, de Blasio later acknowledged that he believed Sanders could have beat Donald Trump in the race for the White House.

De Blasio has a longstanding friendship with Sanders. The senator endorsed de Blasio's last mayoral run, swore him in at the inauguration ceremony, and the mayor attended a summit with Sanders and progressive leaders in Burlington, Vermont, in 2018. Sanders and de Blasio's political views align to a great degree. They both support progressive measures such as universal health care and the "Green New Deal."

De Blasio's endorsement of the Brooklynite comes as Sanders has surged in the polls nationally, won a near split of pledged delegates in the Iowa caucuses, and won the New Hampshire primary on Tuesday.

Presidential candidates typically welcome endorsements from former rivals who dropped out of the race, like de Blasio did in September, hoping for a boost from that candidate's supporters — although the mayor had very little support during his run, generally topping out at 1 percent nationally in the polls.