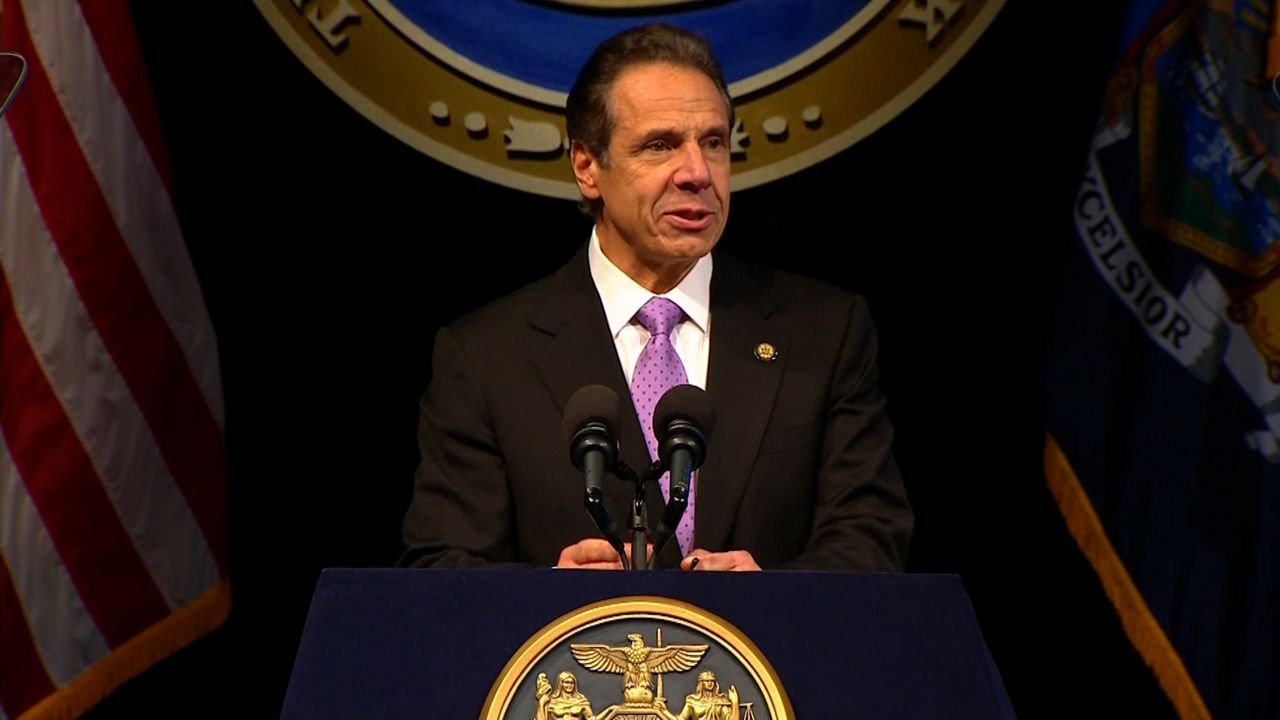 Gov. Andrew Cuomo on Tuesday unveiled a $178 billion budget proposal for Fiscal Year 2021 that in part aims to incentivize local governments to limit spending in the local-level management of Medicaid amid a looming $6 billion budget gap.

The state's Medicaid Redesign Team will try to find $2.5B in savings to help close the $6B budget gap by the April 1 budget deadline.

But @NYGovCuomo says local governments must limit Medicaid growth to 3 percent or they'll need to pay the difference. #NY1Politics pic.twitter.com/JMQWGx4o9z

Speaking in Albany, the governor outlined proposals for investments in public health, education, combatting climate change, and other areas. It was all part of an overall spending plan that would increase state spending by 1.9 percent. In his budget proposal, Cuomo also outlined a five-year plan that would spend $33 billion fighting climate change or preserving the environment. And Cuomo said his budget would increase spending on infrastructure by $25 billion, to what he said were state-record levels.

Cuomo said his administration will also close the budget gap with over $1 billion in higher-than-expected tax revenues and $1.8 billion in local assistance savings.

The governor proposed a $176 billion budget last year, a 2 percent increase over the previous fiscal year.

Medicaid: In 2013, the state began picking up excess Medicaid costs of local governments in order to allow them to stay within a 2 percent spending cap. But as Albany struggles to close a $6 billion gap — $4 billion of which is due to the rapid rising costs of Medicaid and a massive increase in enrollment — Cuomo wants to incentivize local governments to limit spending in the local-level management of the program.

The administration is dealing with a $6.1 budget deficit, which could limit new programs.

In 2013 Cuomo Committed the state to pick up additional costs of Medicaid for localities. He’s now looking to change that formula. pic.twitter.com/BburfmweMF

While he says a "Medicaid Redesign Team" will try to find $2.5 billion in savings to help close the budget gap by the April 1 budget deadline, and he says the state will not hold local governments accountable for closing the gap, the governor wants municipalities to limit Medicaid growth to 3 percent or they'll need to pay the difference.

"It's a good step that it's not an automatic shot at local governments, that they have to pay an increase," Assembly Speaker Carl Heastie said.

Cuomo didn't spell out exactly where he expected the savings to come from, but he hinted that the health care industry — which has feared an increase in taxes on health insurance — may have to provide "new resources" or eliminate inefficiencies.

Cuomo said the savings must have "zero impact" on Medicaid beneficiaries.

The comptroller announced Friday that the state could save nearly $800 million by eliminating unnecessary payments and collecting rebates from drug makers.

When it comes to cutting back Medicaid costs, Cuomo was careful to argue that restricting the rate of growth is different than actually cutting Medicaid. But that's the same argument Democrats reject when Republicans argue in favor of cutting entitlements at the federal level — cutting back the growth of the program amounts to a cut.

That's something Mayor Bill de Blasio and other city officials adamantly oppose, voicing concerns that could mean health care services cuts for some of the most vulnerable New Yorkers.

In a statement released after the governor's budget address, a spokesperson for the mayor said the city would review the details of a Medicaid growth limitation plan but would be "ready to fight to protect New Yorkers."

Statement from @FreddiGoldstein on pushing local costs of Medicaid above 3% onto localities: pic.twitter.com/2nGKyGS8QB

According to City Hall, city taxpayers could be on the hook for hundreds of millions of dollars if Medicaid spending growth were limited.

According to the @NYCMayor Administration, growth of the City's Medicaid costs were 7% in 2019. If the 3% cap proposed by @NYGovCuomo today were in effect, City taxpayers would have been on the hook for $646 Million.

In short, capping local costs at 3% could cost the City big $

Cuomo's budget briefing said much of the money is being shuttled to "high-needs" school districts in the state.

The governor took aim at the school funding formula, which he says favors wealthier districts.

"We need a new formula. And it's not going to be easy," Cuomo said. "Matter of fact, it's going to be hard. But that's what had to be done."

According to the governor, the current funding formula was set a generation ago in a handshake deal between Democrats and Republicans, and there is no reason to continue to adhere to that today.

A change could mean less money for New York City schools and more money for some districts upstate.

school funding formula has remained the same for a generation, after a political deal between Repubs and Dems:

Lawmakers can change that formula but then City and LI will get less.

NYPD tow pound: The governor also singled out the city for the NYPD tow pound at Pier 76 on the West Side Highway. He would like to see it relocated.

"When Hudson River Park was set up in 1998, the city said they would 'use their best efforts' to remove the NYPD tow pound. That was over 20 years ago. It is still a parking lot. It's the most expensive parking lot on the globe," the governor said.

Cuomo put language in his budget that would charge the city $3 million a year if it doesn't move that tow pound.

As part of the budget, @NYGovCuomo has proposed forcing the city to move the NYPD tow pound at Pier 76 within a year, or face fines of $3 Million per year.

Sports betting: Cuomo's state budget stops short of allowing people to place bets on sporting events on their phones. But he is also proposing an expansion of how people can gamble on sports in casinos.

Currently, bettors are limited to placing wagers in sports parlors. Cuomo's plan would allow sports bets to placed anywhere in the casino.

Canadian drugs: Cuomo wants to control the cost of prescription drugs and he's looking north to do so. The governor's budget includes the creation of a commission to study the import of drugs from Canada. It's a move that could save money in the long run, or at least slow the increase in costs.

The state legislature will now hold a series of hearings on the executive budget. It will be negotiated among the state leaders and is due on April 1.