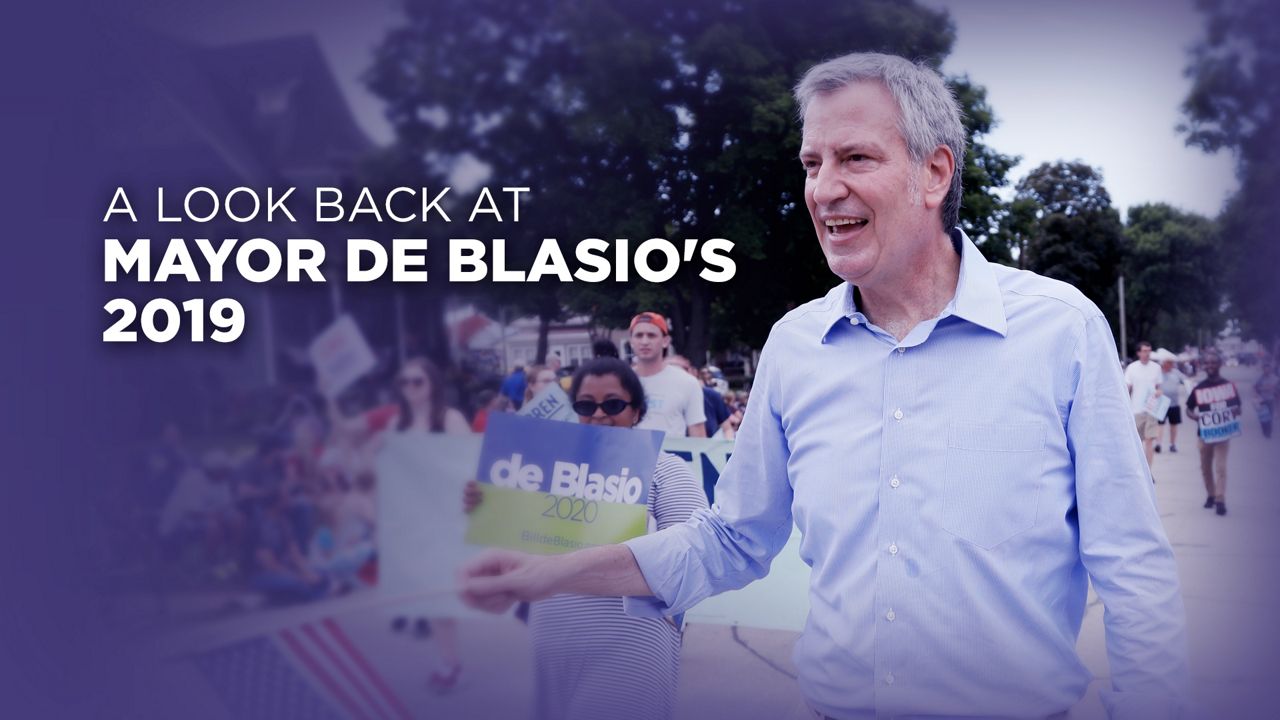 De Blasio's Presidential Campaign: A Look Back at the Mayor's 2019

2019 started out with big promises for New York City residents.

Then, it felt like the year Mayor Bill de Blasio couldn't wait to end, after his run for the White House was largely ignored by voters.

There were few big ideas — rather a promised expansion of the policies that helped get him into office six years ago. A proposal to create the city's first paid leave law remains stalled in the City Council.

It's been nearly a half-century since a sitting New York City mayor sought the Democratic presidential nomination. De Blasio threw his hat in the race in May. He surprised the political establishment, entering a crowded field, branding himself as a can-do progressive eager to take on President Donald Trump.

Don't get into a mudslinging fight with @realDonaldTrump — that was Mayor @BilldeBlasio's message a few months ago. He seems to have thrown that out now, and the president has fired back.

With the city largely on autopilot and New Yorkers sweating through the long days of summer, even a blackout, de Blasio continued to make his case on the campaign trail, facing incessant criticism back home that he was more interested in making a name for himself rather than focusing on his day job.

But de Blasio barely broke two percent in national polls. He qualified for two early debates but failed to stand out.

De Blasio called it quits in September. "I feel like I've contributed all I can to this election, and it's clearly not my time," de Blasio said in an appearance on MSNBC's Morning Joe.

Our @courtneycgross asked @BilldeBlasio if he had any regrets about running for president. "Regrets strategically. I wish I had started earlier. But humanly? No." pic.twitter.com/Ecg43wWukt

Meanwhile, back at City Hall the power vacuum was evident, and those with their eyes on higher office did not waste any time stepping into the spotlight.

City Council Speaker Corey Johnson shepherded legislation requiring the expansion of the city's bike and bus lanes and the creation of a master streets plan.

Trying to shake his lame-duck status, the mayor signed mayor pieces of legislation in the last few months of the year:

“This action today means that NYC is set on a new path,” @NYCMayor says. “This is about valuing people. If god forbid anyone makes a mistake and ends up in the criminal justice system we want it to be that one time. We believe in redemption,” pic.twitter.com/QbdR6Q1Y1d

But some problems remain unsolved: there is a housing crisis, homelessness is on the rise, and although overall crime remains low, the year is ending with a rise in shootings and homicides.

With his last year in office just around the corner, there is another mayor re-entering the spotlight. Michael Bloomberg is running for president, and de Blasio is eager to criticize his legacy here at home.