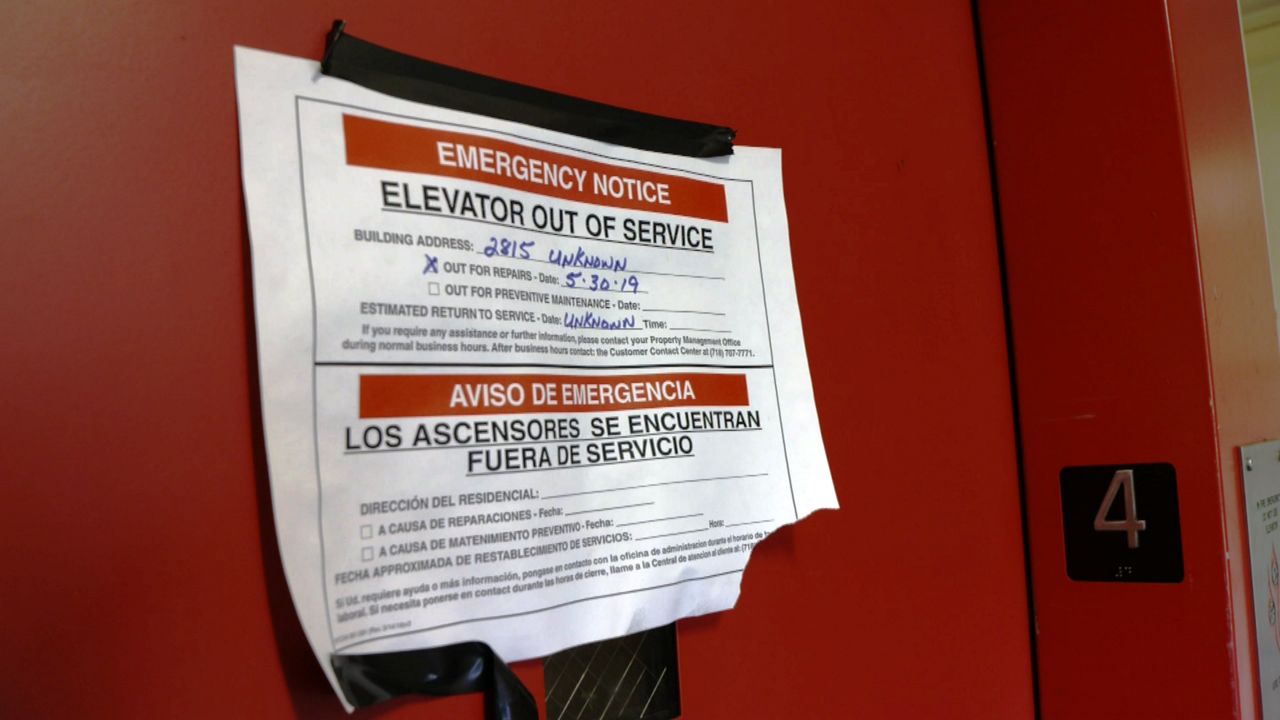 Soon is what the New York City Housing Authority told Nancy Montanez. That was months ago.

Standing inside her kitchen in the Throggs Neck Houses in the Bronx, Montanez watches her 42-year-old daughter and her voice breaks.

"They said soon," she says. "But soon has been since May until now."

Montanez has lived at this sprawling Bronx public housing development for decades, taking care of her daughter, who has cerebral palsy and is blind. Her daughter, Cristy Ramgopaul, spends much of her time in her wheelchair. It's for that reason she hasn't left the apartment in months. The street, the neighborhood is four floors down.

And their elevator doesn't work.

"She wants to go outside," Montanez explains. "If we want to go to the corner store, which is right here across the street, simple things like that that make her happy. Seeing her relatives, they come over like when they are not working. That's the only thing I can give her, and it's the only thing she wants, and I can’t give her that."

We first met them both in July. Since then, they have been trapped inside as the days, the weeks and the months tick by.

The elevator stopped working on May 30. NYCHA says the shaft isn't structurally sound. There was a leak from the roof.

Montanez, who has difficulty moving around and uses a walker, has left just three times to get to doctor's appointments. Each time, she braves the stairs.

What’s clear is for the elderly or disabled, a broken elevator is essentially a prison sentence – trapped inside their apartments and the stairs are too ominous to climb.

NY1 exclusively obtained a year's worth of elevator outage records from the New York City Housing Authority. We found between 2012 and 2018, the number of elevator outages climbed by more than 16 percent -- from almost 38,000 in 2012 to more than 44,000 last year.

That's about 121 breakdowns a day for a system that houses roughly 400,000 New Yorkers. On average, those outages each lasted for 12 hours.

We found some developments were far worse than others, leaving disabled or elderly residents stranded in their apartments or in lobbies for hours.

This was the case especially at Mitchel Houses in the South Bronx. Last year, there were 876 outages there, more than any other development. On top of that, these outages, on average, lasted much longer, about 22 hours.

"I came back from the center and couldn't get back upstairs," she told us last week. "Didn't get upstairs until 3 o'clock in the morning."

Jones lives on the 14th floor with her two sons. Her walls are crumbling from water damage, another issue NYCHA has yet to fix. She has arthritis and uses a scooter to get around. So when the elevators are down, she is marooned high above her Bronx neighborhood.

NY1 examined records from Department of Buildings, which show time and again, routine inspections of elevators at NYCHA developments with chronic outages find "defects" or were deemed "unsatisfactory,” including the elevators in Jones' building and the elevator in Montanez's.

Meanwhile, NYCHA says the number of violations found during elevator inspections is heading down, from more than 15,000 in 2016 to nearly 12,000 last year.

Officials emphasized not all of those violations are safety-related. When they are, officials say, the elevator is immediately shut down.

Still, NYCHA has just 10 certified mechanics to conduct these inspections. They have to examine more than 3,200 elevators across NYCHA twice a year.

They inspect 30 elevators a day. There are 193 mechanics charged with fixing NYCHA elevators, but their ranks have shrunk. Since, 2010 the number of mechanics has fallen by 11 percent.

NYCHA officials are quick to say there is a lot of work to be done.

"Our elevators break down for many different reasons. Some may be old and they need to be replaced," said Joey Koch, NYCHA's Senior Vice President for Operations Support Services. "There could be any number of reasons the elevators break down. It's unfortunate and it shouldn't be happening."

"I would love to be able to hire 300 inspectors, 400 inspectors, whatever that number that I need, but we are resource challenged," Koch said. "So unfortunately, we have 10 inspectors. That's what we have."

She said NYCHA is now tracking elevator outages to determine whether there are systemic issues behind each outage. They didn't do that before. That change was made in June. The mayor has also committed to replacing 405 elevators at 30 developments by 2027.

Mitchel Houses won't get new elevators until 2023. The elevators at Throggs Neck won't be fixed until October.

For Montanez and her daughter, that's another month of captivity, a whole season spent inside.