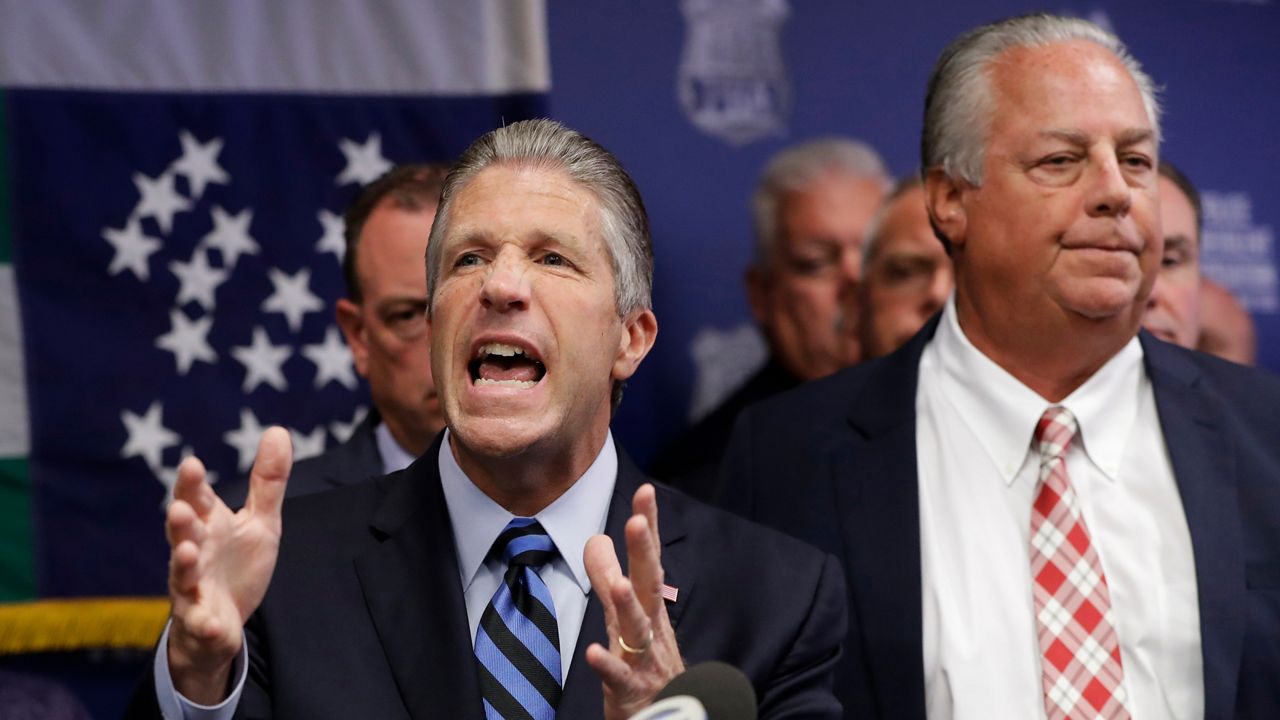 Not even two hours after the police commissioner announced the firing of Daniel Pantaleo on Monday, the head of the uniformed police officers' union let loose.

"The job is dead because the leadership of this city and this police department are absolutely afraid of the criminal advocates," Patrick Lynch, the president of the Police Benevolent Association union for uniformed officers, said at a news conference responding to the officer's firing.

Lynch called the firing of the officer an assault on the NYPD's rank-and file. His backdrop: the NYPD flag hung upside-down, standing for a sign of distress. Lynch said Police Commissioner James O'Neill picked politics over his police officers.

"It's absolutely essential that the world know that the New York City Police Department is rudderless and frozen," Lynch said. "The leadership has abandoned ship and left our police officers on the street. Alone."


"It is absolutely essential that the world know that the New York City Police Department is rudderless and frozen. The leadership has abandoned ship and left our police officers on the street." - @NYCPBA President Pat Lynch on decision to fire #NYPD officer #DanielPantaleo. pic.twitter.com/g61M7177lT

Within minutes, a wanted poster featuring the NYPD's top brass, seen below, was circulating among the department's rank-and-file, saying O'Neill effectively killed the NYPD. The union did not claim responsibility for the message, but it did send out its own directive to the force. It says, "Unless and until the Department provides guidance on how police officers are expected to do our job without any expectation of due process, all PBA members are advised to utilize the discretion afforded by current Department procedures to protect themselves from unwarranted discipline and legal liability."

For example, it goes on to advise officers await a patrol supervisor's arrival before attempting an arrest unless immediate action is necessary.

Gross: Are you advocating for some sort of slowdown?

Lynch: We're advocating for our members to protect themselves so they can protect the public. Realize you have been abandoned.

Lynch is known for his inflammatory rhetoric and antagonistic relationship with Mayor Bill de Blasio. He called for Gov. Andrew Cuomo to remove the mayor and is planning for his union to hold a vote of no-confidence in the mayor and police commissioner.


The head of @NYCPBA called for a no-confidence vote on Mayor @BilldeBlasio and Commissioner O'Neill after Daniel Pantaleo was fired, and said officers should call supervisors before making an arrest.

This continues the deterioration of the relationship between City Hall and the police officers' union, which does not appear to be improving anytime soon.