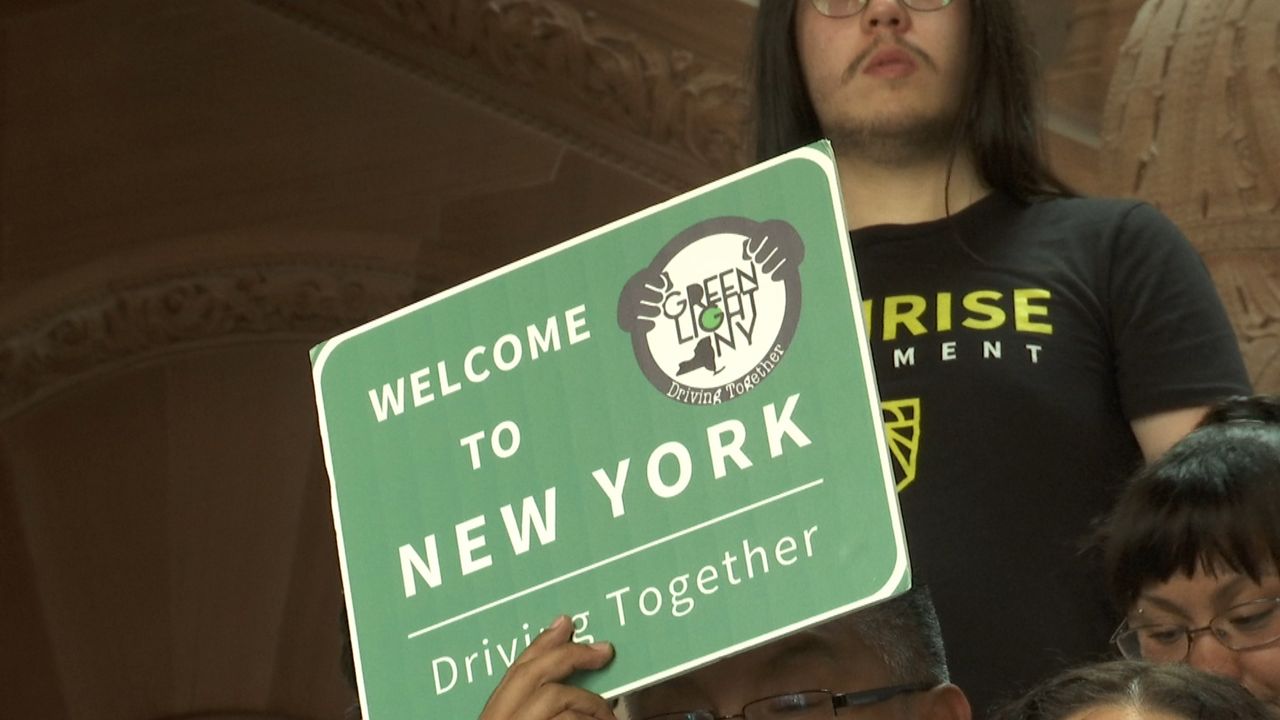 An advocate at a rally in Albany holds up a sign in support of a bill to allow undocumented immigrants in New York to apply for driver's licenses. Zack Fink/NY1.

In an evening vote, the Democratic-controlled Senate passed the Green Light Bill by a relatively thin margin, 33-29. Cuomo signed the bill less than three hours later.

⁦@NYGovCuomo⁩ has threatened to veto the legislation, which would grant driver’s licenses to undocumented immigrants pic.twitter.com/bKWecGvmBx

Cuomo had asked the attorney general's office for an opinion.

"If the solicitor general says the federal government cannot access it and gives me that opinion, I will sign the bill. If she says they can access it, I will not sign the bill. And they should not pass the bill," Cuomo said at a news conference earlier in the day.

Late Monday, New York Attorney General Letitia James, seen as a Cuomo ally, issued a statement saying she supports the legislation, and that the office would not take a position on what the federal government may or may not do.

"The legislation is well crafted and contains ample protections for those who apply for driver's licenses," James said in the statement. "If this bill is enacted and challenged in court, we will vigorously defend it."

Soon after, a statement in response came from Alphonso David, the Counsel to the Governor, said Solicitor General Barbara Underwood "has remained unresponsive on this critical issue. With that said, based on the Attorney General's representation, the Governor will sign the bill."

The Senate would not have had enough votes to overturn a Cuomo veto on this bill because of the thin margin of support in the upper chamber.

For weeks, it was unclear if the Senate had enough support to pass the Green Light Bill, but Senate Democrats finally brought it to the floor for a vote Monday.

"At the end of day, we are going to do what's right for people in this state, be it documented or undocumented immigrants, or just the common people," said Luis Sepulveda, a Democratic state senator representing parts of the Bronx who was the bill's main sponsor.

The bill was first debated 12 years ago when then-gov. Eliot Spitzer tried to do it through executive order. Spitzer's proposal called for rescinding Gov. George Pataki's order that driver's licenses require Social Security numbers, a requirement after the September 11 terror attacks. But Spitzer's move failed when local county clerks rebelled.

As recently as three days ago, Cuomo said he would sign the legislation. The bill's supporters said they were puzzled by Cuomo's reversed position.

"I don't know what the governor's motivation is. I can tell you that we commenced discussions with the governor's office back in January and none of these concerns were relayed to us," Sepulveda said. "Why now? I don't know. You'd have to ask the governor."

On threatened veto of #GreenlightNY bill by @NYGovCuomo, @LuisSepulvedaNY says “I don’t know what the Governor’s motivation is.”

Adds he has been speaking to Gov’s office since January, and they never brought up these concerns before.

Supporters of the Green Light Bill include the state Business Council and immigrant advocates who say licenses would help immigrants get to work and complete everyday tasks.

Democratic senators from more conservative districts either ran away from us, or were not very eager to discuss their position on the Green Light Bill. That includes Senators Monica Martinez and Kevin Thomas, both from Long Island. There are campaigns in those districts to draw attention to the bill and pressure the lawmakers to vote against it.

Fink: Can tell me how you are going to vote on Green Light Bill?

The same Green Light Bill sailed through the Democratic-controlled state Assembly last week, which meant the only thing that could have potentially gotten in its way was Cuomo's veto.

The concerns of the federal government being able to access the database are not new, but public records are not only available through the DMV; they are also available through school records, for example and much of the information is public already.

A dozen other states, along with Washington D.C., already allow undocumented immigrants to apply for get driver's licenses.

12 states and Washington D.C. allow undocumented immigrants to obtain driver's licenses. Listen to #NY1OffTopic to find out why that would matter so much in other parts of New York. https://t.co/2f5SBm0dR0 pic.twitter.com/ILc8Tuy2w3

Information from the Associated Press was included in this report.