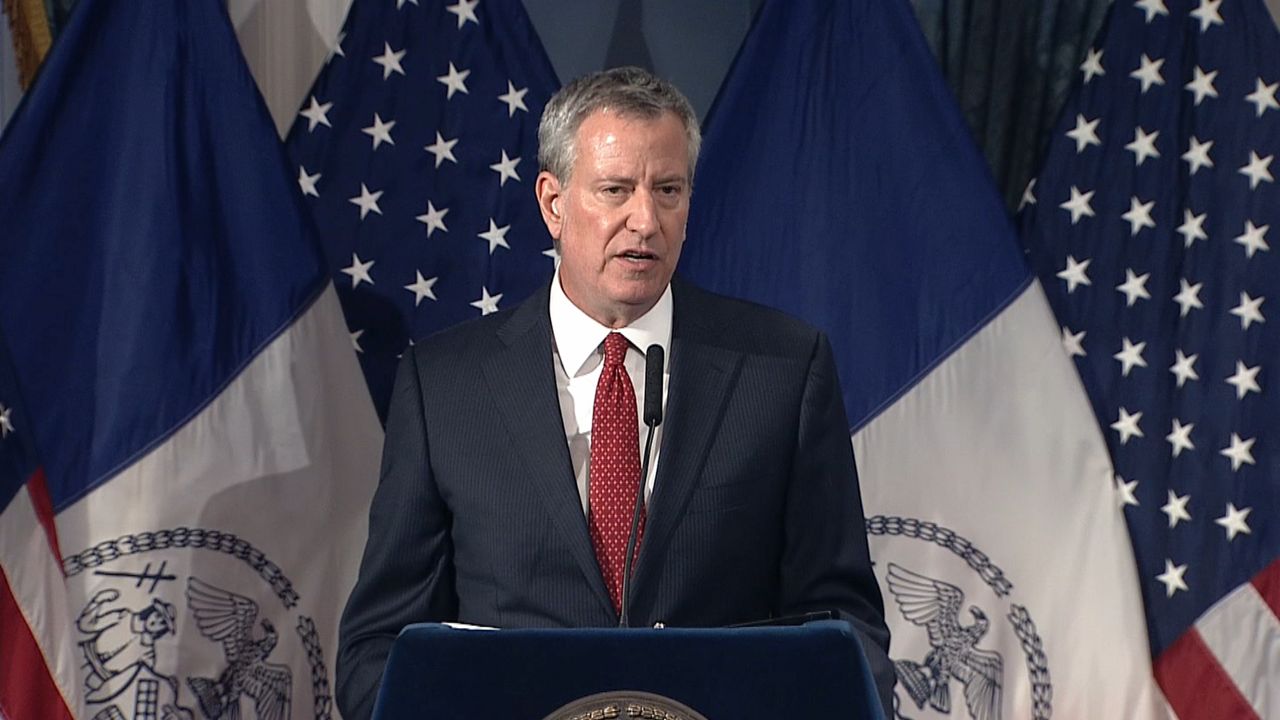 Bill de Blasio on Thursday called for city agencies to cut their budgets in his presentation of his preliminary budget proposal for fiscal year 2020. Image courtesy of the mayor's office.

For the first time as mayor, Bill de Blasio on Thursday called for city agencies to cut their budgets, painting a grim economic outlook for New York City he said is the result of volatile nationwide economic activity, a loss in personal income tax revenue, and cuts and cost shifts in the state budget.

For the first time as mayor, Bill de Blasio on Thursday called for New York City agencies to cut their budgets. He says he's looking for $750 million in savings by April. #NY1Politics pic.twitter.com/E1pPvBWS8J

"We know that every agency does its best, but some have programs that perhaps haven't been as effective as hoped or haven't yielded the kind of results we would have liked," de Blasio said at his announcement. "Some have areas where they can find deficiencies. Some have personnel decisions they can make that, even if they're not ideal, they're sustainable."

Highlights from the preliminary budget proposal:

In presenting his record $92.2 billion — an increase of about $3 billion from the 2019 fiscal year budget agreement reached last summer — preliminary budget for the 2020 fiscal year, the mayor said the city's personal income tax revenue has slowed considerably. Budget officials said that revenue is down about a billion dollars from where it was last year.

Those cuts and shifts include:

The mayor said the budget was also crafted with concerns about another government shutdown this month. He said the city could lose up to $500 million a month, beginning in May, if Washington lawmakers don't agree to a long-term spending bill by the February 15 deadline.

"If it happened again and it continued to set new records for longevity, there are real, immediate dangers to our budget," de Blasio said.

Citing the budget shortfalls, along with experts projecting a national economic slowdown in the near future, the mayor proposed for city agencies to cut their budgets, saying he's looking for $750 million in agency savings by April. He said the cuts must be recurring. No city agency would be exempt.

De Blasio has just proposed city agencies to cut their budgets -- the first time he's EVER done this as Mayor. He says he's looking for $750M in savings by April. (For context, requiring agency budget cuts was a regular feature of Mayor Bloomberg's budgets)

"Every agency will be required to come up with real and tangible savings," de Blasio said. According to the mayor, the city's budget director will decide what to cut if agencies don't.

The mayor also called for the city to expand a partial hiring freeze to save money.

De Blasio did, however, propose deeper investments in health care for the uninsured, the city's "3K for All" program, and the "Fair Fares" program, which provides reduced-price MetroCards to low-income New Yorkers.

Despite the grim outlook, the mayor characterized the city's reserves as "remaining steady."

Budget watchdogs are keeping close tabs on the growth of the overall budget.

"This preliminary budget grows the budget around 3.4 percent. Certainly less than he has done in the past, but it is certainly growth that is unsustainable if we have a downturn," said Andrew Rein, the president of the Citizens Budget Commission.

City Council Speaker Corey Johnson indicated he will be willing to fight the mayor over cuts Johnson feels will harm New Yorkers.

"We would not support anything that eliminates crucial social service programs, education programs, youth programs, programs that help the vulnerable and the working class and the poor in New York City," Johnson said after the mayor's budget remarks. "So that is our initial take, the council's initial take, on this budget."

The mayor's address kicked off budget negotiating season at City Hall. A final budget deal between the mayor and City Council is due by the end of June.