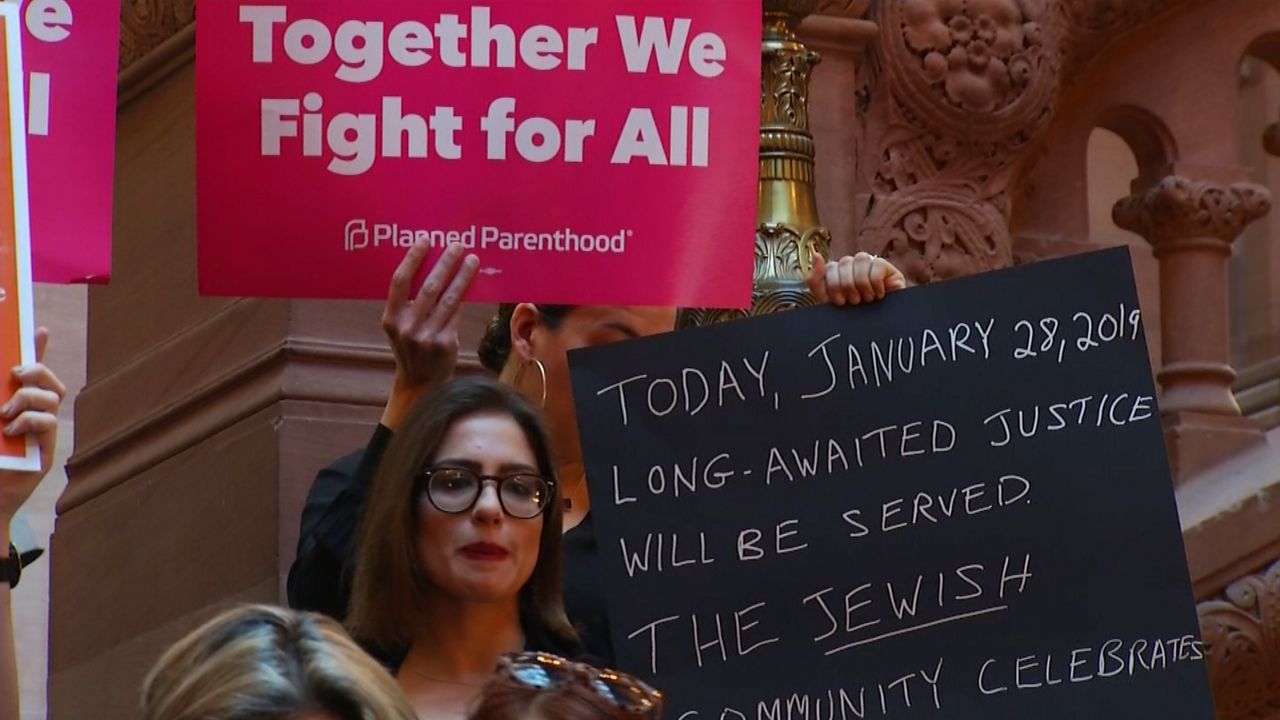 Advocates rally in Albany in support of the Child Victims Act before lawmakers passed the bill Monday.

A bill to extend the statute of limitations to give victims of childhood sexual abuse more time to seek criminal charges and file lawsuits passed the New York legislature nearly unanimously Monday — a bill that has languished in Albany for more than a decade.

The Child Victims Act was approved in lopsided numbers in both chambers of the Democratic-controlled Legislature. In the state Senate, lawmakers approved the bill unanimously, 63-0. In the state Assembly, the bill won passage 130-3. Gov. Andrew Cuomo is expected to sign the bill.

The Child Victims Act would also create a one-year litigation window for victims to file lawsuits now barred by the statute of limitations.

The vote on the Child Victims Act in the Democrat-led Senate and Assembly comes after years of unsuccessful efforts to pass the legislation. While it's been endorsed by the Assembly repeatedly, the act was blocked by Senate Republicans. Democrats won control of the chamber last fall, however, and said passing the act is one of their top priorities for 2019.

"We apologize for not hearing you soon enough," Senate Leader Andrea Stewart-Cousins said on the floor, in what she said was a message to survivors. "We apologize for making you wait so long...The wait is over."

"The gates to our courts and to justice will soon finally swing wide open to the survivors of child sexual abuse who have been silenced for so long," Manhattan Democrat Linda Rosenthal, the Assembly sponsor of the bill, said before the vote. "Those days are now behind us."

Research suggests that many survivors don't remember — or at the very least don't come to terms with their abuse — until much later in life. Massachusetts, another heavily Catholic state, already gives victims up to 35 years to sue. Ohio and Pennsylvania both give victims until age 30.

The one-year litigation window for past claims now barred by the statute of limitations has been the sticking point, with large private institutions such as the Catholic Church warning that it could cause catastrophic financial harm to any organization that cares for children. A similar law in California, passed in 2002, resulted in Catholic dioceses there paying $1.2 billion in settlements.

The church dropped its opposition to the act last week, however, when the act was revised to treat public and private schools and entities the same. In a joint statement on the bill's passage, the state's Catholic bishops said they "pray that the passage of the Child Victims Act brings some measure of healing to all survivors."

To those victims who had pushed for passage of the act for more than a decade, Monday was cause for celebration. At a rally in the Capitol one survivor held a sign that read "16 Yrs. But we did it."

"We faced evil forces. We faced special interests. We defeated them," said Gary Greenberg, an abuse victim and a leading supporter of the act who created a political action committee to support candidates who backed the bill.

At least four lawmakers brought up stories of their own past abuse during legislative floor debate on the bill. Manhattan Assemblywoman Yuh-Line Niou tearfully recounted abuse she suffered at the hands of a teacher at age 13. She said the pain can be too much for any child — or adult — to bear, let alone openly discuss.

"I can still smell what it smelled like," she said, recalling details from her abuse. Niou's colleagues in the Assembly gave her a standing ovation before the Assembly passed the act.

While only three lawmakers voted against the measure, several Republicans voiced concerns that the bill could bankrupt organizations over decades-old claims that would be difficult to refute.

"For a year, you can bring a civil lawsuit against anybody with no restrictions whatsoever as to the timing," said Chautauqua Assemblyman Andy Goodell, a Republican. "Your claim could be 50, 60, 70 years old. Long past the time that any individual employer would have any records to defend themselves."

The bill was sponsored by Sen. Brad Hoylman and Rosenthal, both Manhattan Democrats.

Flanked by eight child molestation victims, Cuomo said a state Capitol news conference held Monday morning that the legislation will offer the opportunity for justice to victims who have suffered what he called a "horrendous violation in life."

Stephen Jimenez, a 65-year-old journalist who said he was molested by a faculty member at his Catholic elementary in Brooklyn in the 1960s, called the measure's impending passage "exhilarating."

"This is a big, big step forward in terms of New York setting an example," Jimenez said.