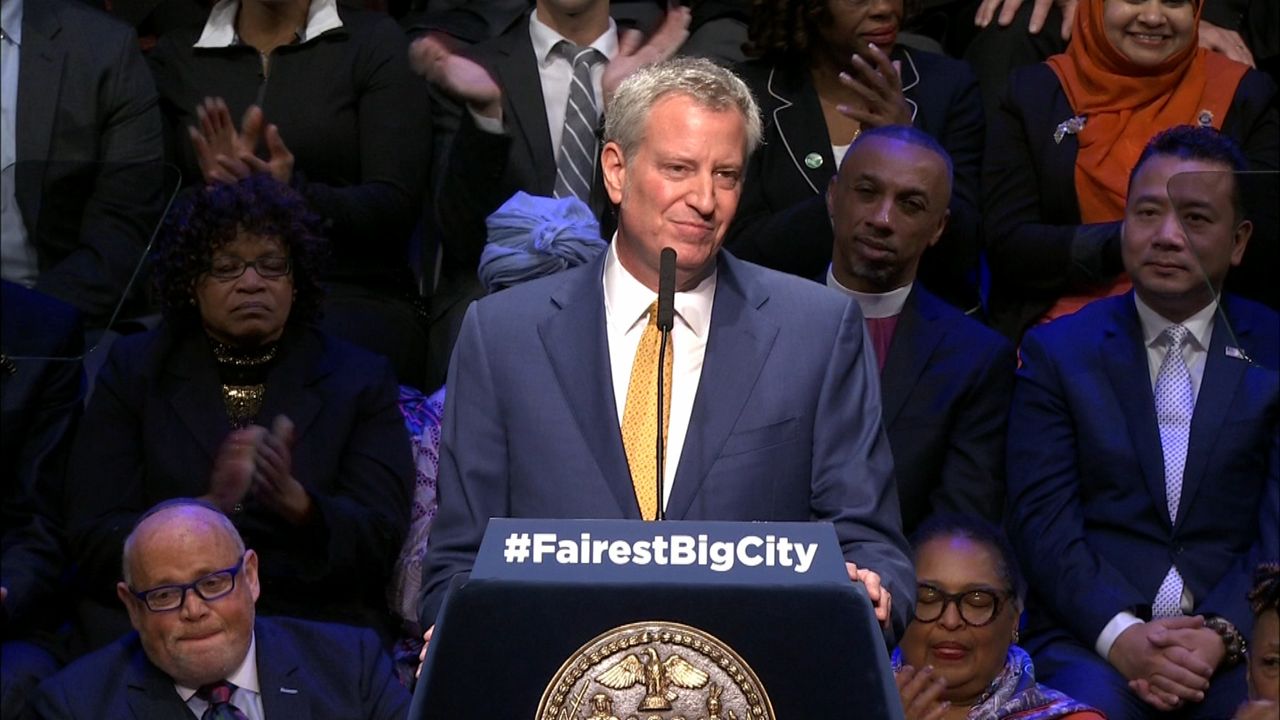 In his sixth State of the City speech on Thursday, Mayor de Blasio returned to his ideological roots, railing against the concentration of wealth in the hands of the very few. He introduced a slew of initiatives he said will help New Yorkers catch their breath and catch a break as they struggle to live in our modern world.

"Imagine a city where New Yorkers can live their lives more fully," de Blasio told the audience at Symphony Space in Manhattan. "That's the quality of life I want for every New Yorker."

QUICK HIGHLIGHTS: WHAT INITIATIVES DID THE MAYOR ANNOUNCE?

An expansion of the city's NYC Ferry service to Staten Island and Coney Island.

Free glasses to any kindergartner and first-grader who needs them.

QUICK HIGHLIGHTS: WHAT INITIATIVES DOES THE MAYOR NEED CITY COUNCIL APPROVAL FOR?

Creating a city-managed retirement fund so every working New Yorker could have a retirement savings account.

Having his newly-created Office to Protect Tenants seize as many as 40 properties a year from "bad landlords" who harass tenants. The city would transfer ownership to non-profit groups.

The Staten Island route will run from St. George to Battery Park/Vesey Street, then up to Pier 79/West 39th Street in Midtown.

In his address, the @NYCMayor talked about expanding the @NYCFerry. Here’s a look at how Staten Island will be linked to the West Side of Manhattan. #NY1Politics pic.twitter.com/eQmGKqnulS

For Bronx residents, the recently-established Soundview route will be extended to Ferry Point.

A Coney Island to Bay Ridge to Manhattan route is scheduled to begin in 2021.

Timetables for the other new routes were not immediately available. De Blasio says he hopes to have the new ferry route rolled out sometime next year.

Rides on the new ferries will cost $2.75 each, contrary to the existing Staten Island Ferry, which is free and will continue to operate.

A PUSH TO GIVE ALL NEW YORKERS A RETIREMENT SAVINGS ACCOUNT

The mayor said he would create a city-managed retirement fund for workers who lack access to employer-sponsored funds.

The plan has been proposed previously and would have to be passed by the City Council.

De Blasio said half of the city's workers don't have employer-sponsored retirement plans. Under his proposal, he said, those employees will be able to invest a portion of their paycheck into a city-managed fund and carry it from job to job. "If you've spent your lifetime working, you've paid your dues," he said.

A NEW OFFICE TO ROOT OUT LANDLORD ABUSE

De Blasio signed an executive order creating the Office to Protect Tenants on the spot and vowed that the office would root out landlord abuse. "If fines and penalties don't cut it, we will seize their buildings and we will put them into the hands of a nonprofit that will treat tenants with the respect they deserve," he said.

The de Blasio administration is planning on seizing as many as 40 properties a year from "bad landlords" who harass tenants. The city would transfer ownership to non-profit groups. The City Council would have to approve the move.

.@NYCMayorsOffice tells me this new tenant protection office could seize as many as 40 properties a year from "bad landlords." They also claim it's different from the now-controversial third party transfer program. Not really seeing the difference here... just saying

In a statement, City Council Speaker Corey Johnson declined to say if he would support the proposal.

Doesn’t sound like @NYCSpeakerCoJo is on board with the @NYCMayor’s new plan to seize properties from bad landlords. Statement from @jfermino below: pic.twitter.com/zvsgVO470z

FREE GLASSES AND AN EXPANSION OF '3-K'

The initiative to provide free glasses is an expansion of an existing partnership with eyewear maker Warby Parker that provides free eye exams and glasses in more than 200 schools.

The mayor also promised to speed up the expansion of public pre-k for 3-year-olds, and speed up city buses.

REBRANDING THE DEPARTMENT OF CONSUMER AFFAIRS

De Blasio said the renamed Department of Consumer and Worker Protection will be charged with protecting the rights of nannies, home health aides, freelancers and others who work without benefits or traditional job protections.

THE AMAZON ELEPHANT IN THE ROOM

Amazon's plans to open a secondary headquarter in Long Island City got only passing mention.

De Blasio, who campaigned in 2013 on a promise to offer prekindergarten to every 4-year-old in the city, has sought to position himself as a national progressive leader. But some of his fellow liberal Democrats in New York have criticized him for his enthusiastic embrace of Amazon, which is getting $2.8 billion in tax breaks and grants from the state and city to build a secondary headquarters in New York.

The mayor said Thursday that decisions by Amazon and Google to expand their presence in the city prove that "the world's most innovative companies want to be here and want to hire New Yorkers."

Meanwhile, de Blasio on Wednesday was asked whether his policy plans, which gained national attention, are signals he is planning to run for president.

"It's a signal that we need to make more progressive change in New York City. But also a reminder that New York City can help lead the nation," he said. "We have a chance to really set the pace here. So I am focused on New York City but I know what we do here can have a huge impact on the rest of the country and I am going to go out and preach the gospel."