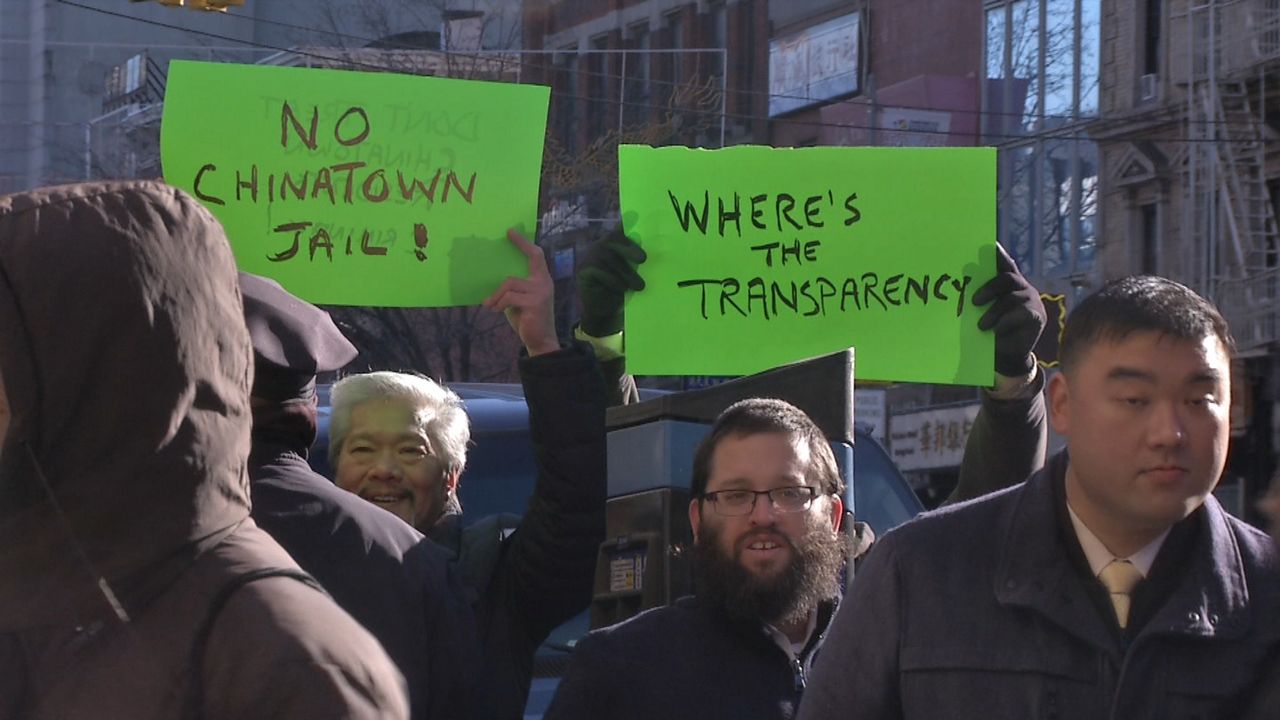 A small group of people protest on Tuesday the city's plan to build a 50-story jail in Chinatown to replace the Manhattan Detention Complex. Bobby Cuza/NY1.

A 50-Story Jail in Chinatown: What to Know About the Clash Over the Proposal

While Mayor Bill de Blasio has won praise for his plan to close Rikers Island, he's getting plenty of pushback on the four borough-based jails that are meant to replace it. That includes a proposed 50-story jail planned for lower Manhattan that has angered residents in nearby Chinatown.

Here's a look at the fight over the jail:

REPLACING ONE JAIL WITH A 50-STORY ONE

Just three weeks ago, the city dropped plans to build a 40-story jail on the site of a government building at 80 Centre Street, in part due to community concerns.

But its fallback plan, replacing the existing Manhattan Detention Complex just up the street with a new 50-story jail, hasn't quieted the outrage. (The Manhattan Detention Complex. The city's plan to build a new 50-story jail nearby to replace it has infuriated local residents. Bobby Cuza/NY1).

De Blasio came in person Tuesday to talk it over at a community roundtable. It's been a pattern across the city, with residents pushing back against planned jail sites that are meant collectively to allow for the closing of Rikers Island.

"This is part of a vision of getting off Rikers, having four community-based jails of similar size," the mayor said. "We know they must be safe for the surrounding communities, and we have a track record that shows us that can be done very well."

WHY LOCAL RESIDENTS FEAR A BIGGER JAIL WILL IMPACT THEM

But community leaders complain of having been shut out of the process. Some have demanded an analysis of viable alternatives and further environmental review.

"If you're going to make it bigger, then there are concerns about construction, traffic congestion, also the impact of the senior building," Manhattan City Councilwoman Margaret Chin said.

That refers to the Chung Pak affordable senior housing development that shares a wall with the existing jail. During the brief part of the meeting open to press, the mayor did talk about community benefits.

"It's important to give back in that process and to help the community in a variety of ways, to help community organizations," de Blasio said.

Participants said they were grateful to hear directly from the mayor, who was met by a small group of protesters on his way in and out of the meeting, but they also weren't necessarily swayed.

"The basic questions about why the city believes they need to build a 50-story jail in this community are still outstanding," said Brian Kavanagh, who represents the area in the state Senate.

"If he does not engage the community — the people who live and work here, who are directly impacted — as part of the planning process, and he continues to build several 50-story mammoth monuments to incarceration — that will be his legacy, and it won't be closing Rikers," said Nancy Kong of Neighbors United Below Canal.