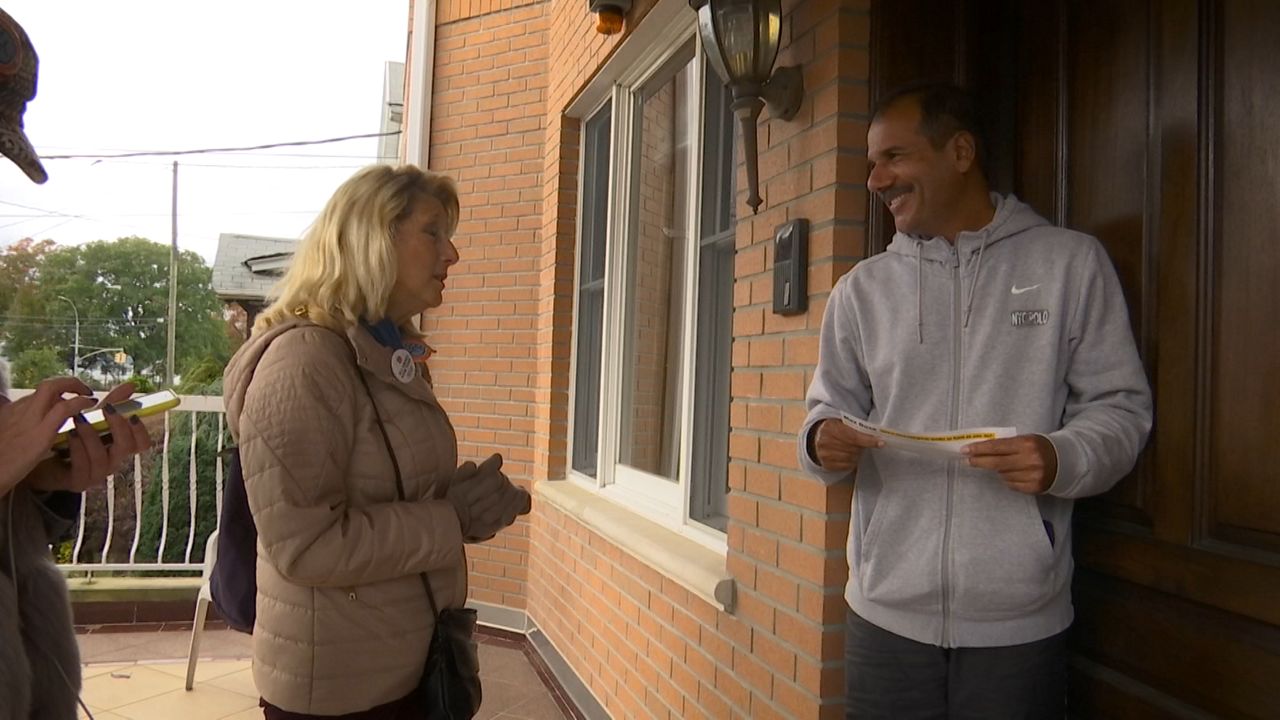 Across the country, Democrats are hoping that their voters are energized enough to create a "Blue Wave."

In New York City, where most congressional seats are safely in Democratic hands, progressives have come up with an alternative: Volunteer for candidates outside of their own neighborhood.

Here's what I found when I went to two of those swing districts:

It's a door-to-door sales pitch that's alive and well during the campaign season.

"We're volunteers with the Liuba Grechen Shirley campaign. Are you familiar with her?" campaign volunteer Brice Gaillard said to someone in Long Island after knocking on their door.

"We're here today to talk to our neighbors about Army veteran Max Rose," volunteer Linda Gerena said to someone in Brooklyn.

Well, neighbors is a bit of a stretch. Two volunteers I followed came to Bay Ridge, Brooklyn from Queens and met in Union Square that morning.

"I am originally from Brooklyn, born and raised, left there when I was in my mid-20s," Gerena said. "I currently live in Forest Hills, Queens."

"I have lived in New York for 21 years," volunteer Danielle Brecker said. "I currently live in Long Island City."

"Again, we are here to canvass for Max Rose," Gerena said.

They hop on the R train for an hour-long ride to Rose's Brooklyn campaign headquarters. Rose is a Democrat trying to unseat the Republican incumbent, Dan Donovan.

"We're all neighbors and we all have the same issues," Brecker said. "The infrastructure issues that impact this neighborhood impact me."

No, Donovan is not her congressman; it's actually Carolyn Maloney. But that's not the point.

Across the state, activists who live in congressional districts that are considered safely Democratic are looking outside their neighborhood to pitch in, flocking to other districts to try to flip the House of Representatives and turn red seats blue.

The practice has become somewhat controversial, like in the 19th District in the Hudson Valley. The current GOP congressman, John Faso, is claiming his Democratic rival, Antonio Delgado, is bringing socialists from New York City up to his campaign.

Those helping out don't see it that way.

"Even though it's not my district, I feel like the person in that seat in Congress affects my life and all of our lives," Gaillard said.

"We're all a united front of progressives who are looking to help wherever we can," volunteer Melissa Shaw said. "We spent some time canvassing in Brooklyn this week, so now we are going to take our energy out to Long Island."

They leave from Carroll Gardens, and it's a straight shot east, about 35 miles — but two hours by car — until they get to campaign headquarters. It's a quick primer on the candidate, and then they head out to an unfamiliar neighborhood:

Gross: Have either of you been here before? Either of you? To Brentwood?

Shaw: I've driven through Brentwood, but I haven't spent any time in this community.

It's not exactly the easiest of assignments.

"He wants to fix the subways, and education, and, most of all, protect Social Security," Gerena said in her campaign pitch to a local voter.

Whether it's in Brooklyn or Long Island —

Local voter: Is he a Democrat?

Gerena: Yes he is.

Local voter: Oh, yeah. You know what, it's kind of a bad day today. We've already made up our minds anyway in terms of who we are voting for.

But, occasionally, every few houses or so, they make a sale:

Shaw: Can we count on your vote on November 6?

"Definitely you can count on my vote," one man told the canvassers.

"I feel like we need a change," one local resident said.