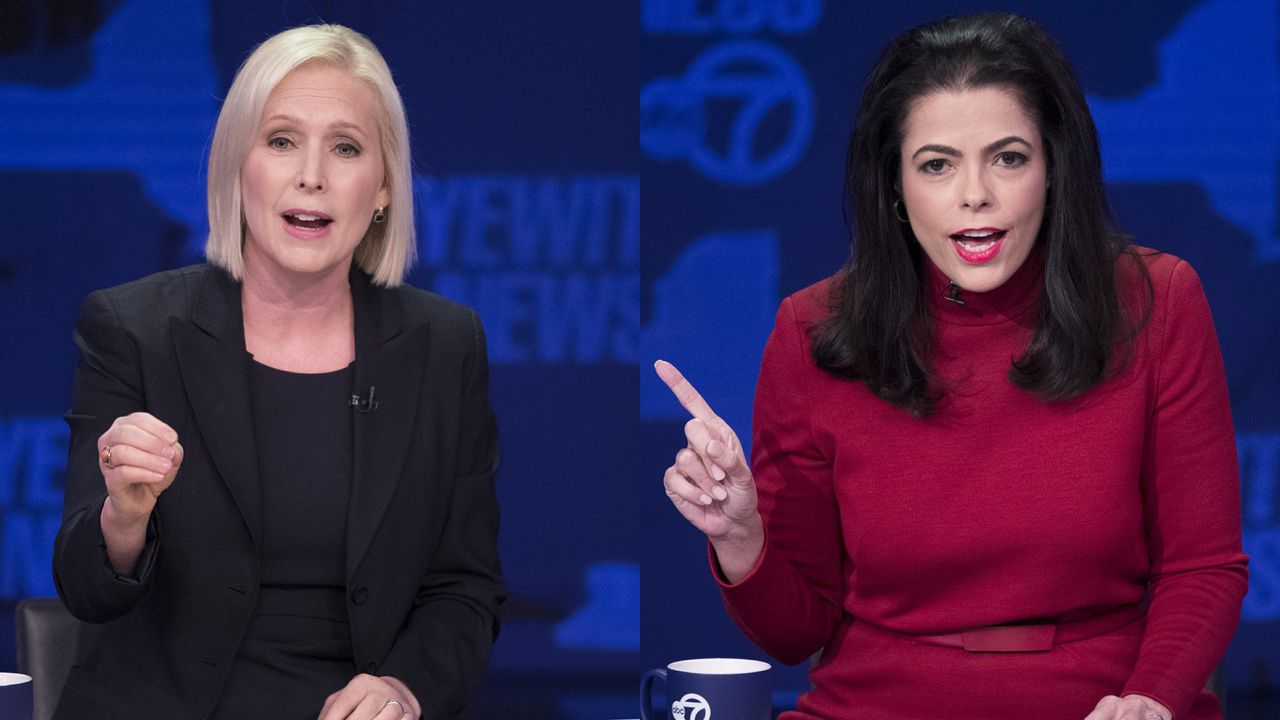 NEW YORK (AP) — U.S. Sen. Kirsten Gillibrand, considered a potential Democratic candidate for the White House in 2020, said during a debate Thursday with her Republican challenger that she will serve out her six-year Senate term if she's re-elected next month.

Gillibrand, whose star has risen quickly since she succeeded Hillary Clinton in 2009, also fielded questions about immigration, health care, and other issues during a half-hour televised debate held in WABC-TV's studio in Manhattan.

A DEMOCRATIC STAR PLEDGES TO STAY IN THE SENATE

When asked about her plans in two years, Gillibrand responded: "I will serve my six-year term."

Opponent Chele Farley, who works in the financial services industry, scoffed at the answer.

"Honestly, I don't believe that, considering this is the third day that she has been in New York during the month of October when she has been in five other states including New Hampshire this month," Farley said. "We don't need somebody who is going to be running for president right after they get re-elected, and I will only run for the U.S. Senate."

Asked about the Central American migrant caravan making its way toward the U.S.-Mexico border, Farley called it "an invasion."

"The real issue here is we have to get comprehensive immigration reform," Farley said. "There was an offer on the table, and Sen. Gillibrand wouldn't vote for it."

"You have people in this caravan to seek asylum in this country," Gillibrand responded. "Immigration has always been a strength in this country. We are a country founded by immigrants. So we need to fix our broken immigration system."

"I do not support open borders, and neither do Democrats," added Gillibrand, who has called for U.S. Immigration and Customs Enforcement, ICE, to be abolished.

FARLEY: MEDICARE FOR ALL IS TOO COSTLY

On health care, Gillibrand said she supports Medicare for all, while Farley opposes it as being too costly to taxpayers.

"What she is proposing means that no one will be allowed to have employer health care," Farley said. "If you like your health care, will you be able to keep it? The answer is no."

"It is estimated to cost $32 trillion over 10 years," Farley said. "That is effectively doubling the entire federal budget."

"The amount of money that people spend today on health care is more than that number you cited," Gillibrand said.

WHERE THE CANDIDATES STAND ON BRETT KAVANAUGH

Farley said she would have voted to confirm Brett Kavanaugh to the U.S. Supreme Court; Gillibrand opposed his confirmation.

"I have teenage sons," the Republican said. "I worry about them living in this life."

"I stand by my vote, and I can't imagine why, if she wants to represent New Yorkers, she would vote yes," the incumbent said.

THE STATE OF THE RACE

A Siena College poll released this month showed Gillibrand with a big lead over Farley, 61 percent to 29 percent.

Gillibrand was a congresswoman representing an eastern New York district when she was appointed to the Senate seat vacated when Clinton was nominated secretary of state by President Barack Obama.