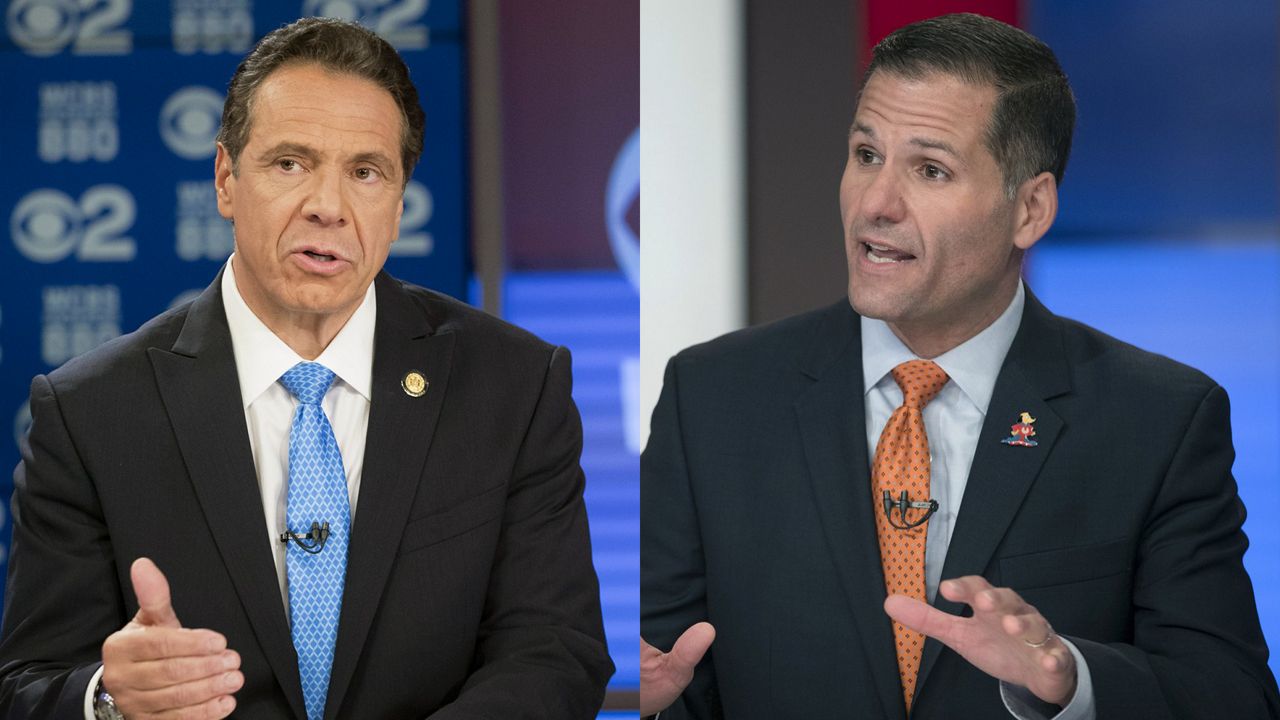 After days wrangling over the terms, Governor Andrew Cuomo and Republican challenger Marc Molinaro squared off in their first — and likely only — debate on Tuesday, sparring over taxes, the corruption convictions of some of Cuomo's top aides, and if Molinaro is an ally of President Donald Trump.

Cuomo: Are you saying you don't support Donald Trump?

Molinaro: I am saying that I am absolutely committed to the delivery of mental health services.

Cuomo: Do you support Donald Trump?

Molinaro: Let's get out of this conversation.

Cuomo: Do you support Donald Trump?

Molinaro: I support anyone who is going to effectively make an —

Cuomo: Do you support Donald Trump? You can't answer it.

Right out of the gate, both candidates went on the attack.

"You raised cellphone taxes, you raised utility taxes, you spend more," Cuomo said to Molinaro. "You call yourself a fiscal conservative; you're a fiscal fraud."

Molinaro went after Cuomo on corruption: "Your administration, 8, 9 individuals now found guilty. You can't possibly expect the voters of the state of New York to believe that you had no idea."

Sometimes, even the moderators seemed overwhelmed.

"Your private law firm represented Mr. Trump and his real estate interests before state agencies while your father was governor. You accepted $60,000 from Donald Trump and haven't returned it," Molinaro said. "You, when you were trying to make friends with the president when he first came to office, told him you wouldn't run against him. And, you sir, had him at your bachelor party; I didn't."

Trump did appear in a videotape message at Cuomo's bachelor party, but Molinaro had a tough time when Cuomo pressed Molinaro if he supported Trump.

One of the criticisms of the last debate, between Cuomo and his Democratic primary opponent, Cynthia Nixon, was that there were no questions about upstate New York. This time around, there was one question about upstate. That was about the Buffalo Bills and if the NFL franchise should get a new stadium.

Images above courtesy of Mary Altaffer/AP.