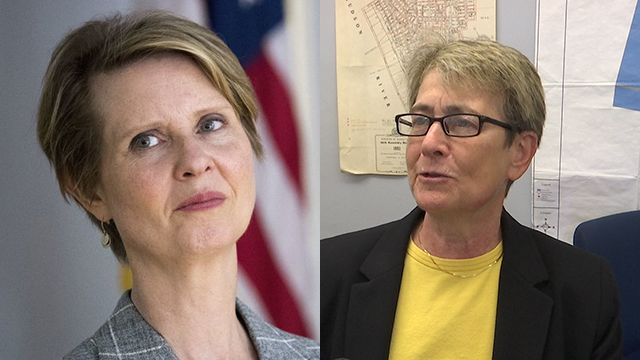 After much internal debate, the Working Families Party eight days ago agreed to drop Cynthia Nixon off its ballot line for governor and endorse Andrew Cuomo for reelection. But because of New York's arcane election laws, party leaders needed to have Nixon run for a different office.

They settled on Manhattan's 66th State Assembly District, where Nixon lives. But that area is already represented by a longtime progressive Democrat, Deborah Glick, who had no say in the matter.

"The frustrating thing is I want to be helping elect Senate Democrats," Glick said. "I would like to be working on congressional campaigns. So yes, I am frustrated by this."

While Nixon has vowed not to actively run and instead campaign for Glick, she will still be on the ballot and some observers say Nixon could still win. Arthur Schwartz is the Democratic district leader in Glick's district. He says Glick was too close to former State Assembly Speaker Sheldon Silver, who was convicted of corruption.

"Shelly was her protector, and she got stuff done partly because she was with Shelly," Schwartz said. "But she also did a lot of bad things like, for example, agreeing to vacancy decontrol, which has decimated our Assembly district, which is Greenwich Village, SoHo, and TriBeCa."

Critics have also accused the Manhattan lawmaker of defending Silver when he covered up for former Assemblyman Vito Lopez, who was found guilty of sexual harassment.

"I believe that the Assembly has taken the kind of steps that are important, Glick said. "I don't have any regrets about what I did, because I don't think I did anything wrong."

In a letter, Nixon's campaign has called on the state Democratic Party to spend the equivalent for Glick that it spent on a controversial campaign flyer falsely accusing Nixon of being anti-Semitic during the primary.

"I don't think that would be the appropriate way to respond to and make amends for what was clearly a scandalous filer," Glick said. "I don't see why I should be dragged into that."

Nixon will work with the Working Families Party to help get Democrats elected next month. They also promise a coordinated voter education campaign to make sure people vote for Glick in the district, not Nixon.