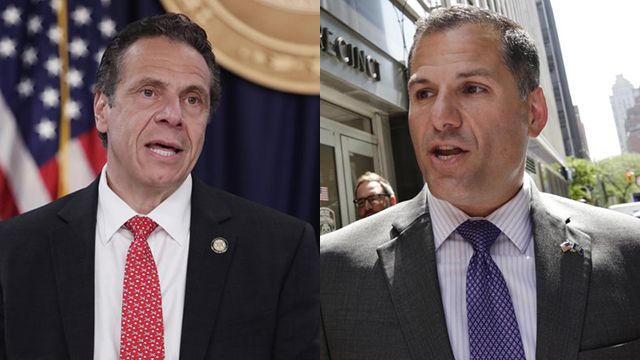 Facing Heat Over Top Aides, Cuomo Points Corruption Finger Back at His Opponent in the Governor's Race

On the day Joe Percoco was sentenced to six years in prison for corruption, the man who was once Gov. Andrew Cuomo's most trusted aide and closest friend, the Cuomo campaign released an ad accusing Cuomo's Republican opponent, Marc Molino, of abusing the public trust.

The head of the Democratic Party even went so far as call for an investigation into Molinaro's activities, which center around Molinaro's spouse.

"Marc Molinaro's wife is not the most trusted aide to the most powerful person in state government. Maybe she will be someday, but she is not right now," said John Kaehny of advocacy group Reinvent Albany. "Percoco had the power to do great things, and he instead used it to do bad things and to abuse the public trust."

"Andrew Cuomo was sentenced today — he just doesn't have to do the time," Molinaro said in a statement. "He came into office promising reform and ended up turning New York State government into a corrupt, taxpayer-paid enterprise that works only to further his presidential ambitions."

But while corruption was brought up repeatedly by Cuomo's primary opponent, Cynthia Nixon, the results last Thursday felt more like a collective shrug. Voters overwhelmingly chose Cuomo, even though several people close to the governor were tagged with corruption convictions.

"It's not Joe Percoco; it's also Alain Kaloyeros, the governor's 'Nano Tzar.' It's also many of the governor's top campaign contributors from upstate New York," Kaehny said. "So this is not a bad apple; this is an epidemic."

Only Democrats were allowed to vote in the primary last week, so it's possible with the full electorate going to the polls in November that the corruption issue will play more of a role in their decision. Then again, it seems like voters are very focused on President Donald Trump and Washington and paying less attention to state issues.