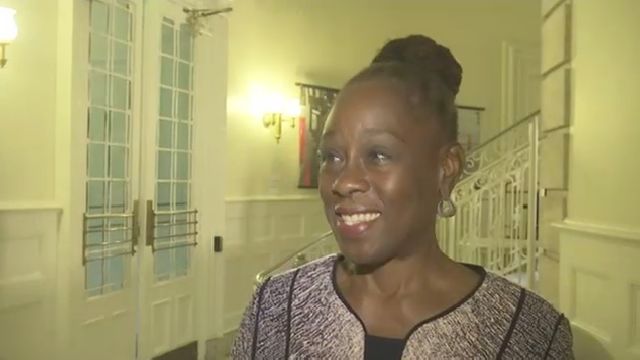 NYC's first lady isn't running for public advocate, but she won't rule out another office

New York City's first lady said Monday that she is not planning to run for public advocate, but she did not rule out running for Brooklyn borough president in a few years.

On the questions about her political future, McCray was less welcoming — on the rostrum at least:

"That's off topic, but I'm happy to talk with you afterwards," she said.

So we did. And McCray said she's not interested in the job almost everyone else in New York City politics seems to want: Public advocate.

People seem to be making moves every day to take over, but McCray isn't joining the fray.

"It is not something that I am thinking about right now," she said. "I have said that I would think about running for office, but not right now."

Not right now. But Brooklyn borough president is slated to open up in 2021.

"I'm not ruling it out, but I am very focused on the work that I have right now," McCray said.

McCray could have used the public advocate platform to highlight concerns, like mental health.

But in a crowded special election, the newly powerful James could be kingmaker or queenmaker.

McCray congratulated James: "I'm confident that she will bring so much energy and enthusiasm to the position, and I also commend Zephyr Teachout for the wonderful campaign that she ran."

Mayor Bill de Blasio didn't endorse in any statewide race, but he's more aligned with Cynthia Nixon, who Gov. Andrew Cuomo bested by more than 30 percentage points in their Democratic primary for governor.

And while 2021 is far away, it speaks to the mayor's dwindling political clout and what he can do to help his wife before then.

Of course, the mayor always has power.

At that news conference, officials said $4.1 million will help migrant children in New York. Some came to the United States without their parents. More high-profile kids are those like a group of little girls in June who were said to have been taken from their parents under a since-abandoned federal policy.

About 40 children are said to remain in the five boroughs. They are separated from their parents, many of whom were deported.