On Monday, the mayor held an event where he displayed signs that said "Promises Made, Promises Kept." 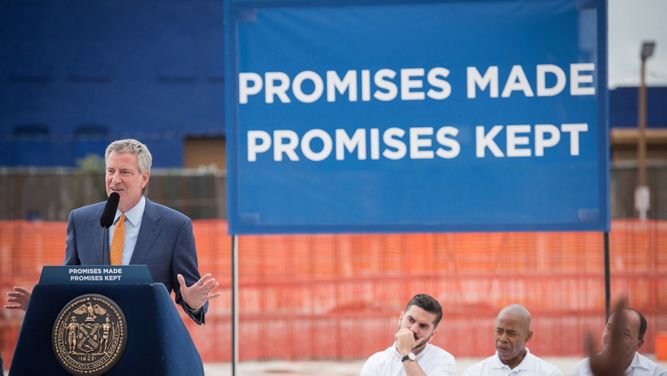 That slogan is the same slogan that the president has used in recent rallies around the country. Here is an example from a rally in Ohio on August 4: 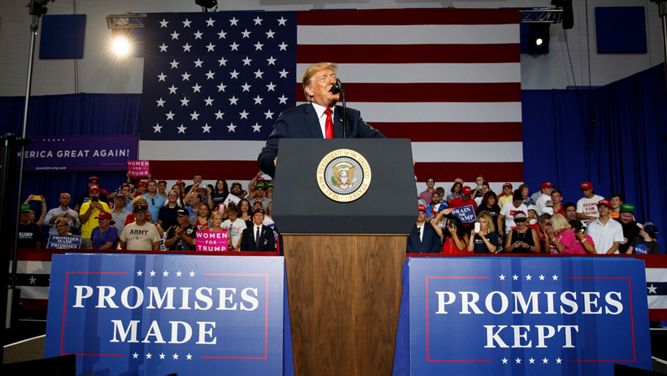 Trump noticed. He said the mayor's decision to use the same slogan was "not at all nice."

Bill DeBlasio, the high taxing Mayor of NYC, just stole my campaign slogan: PROMISES MADE PROMISES KEPT! That’s not at all nice. No imagination! @foxandfriends

De Blasio responded by claiming there is a difference between when the two of them use the slogan.

The difference is that I’m not lying when I say it. https://t.co/dyoi1MdPAm

He then posted a Twitter thread of what he said were promises that Trump broke.

Still waiting on this one. pic.twitter.com/ObjT5izpW9

We knew this wasn't true. pic.twitter.com/zBWFXXqRlm

Several Twitter users were quick to point out that Trump did not appear to be the first person to come up with the slogan.

you REALLY are a moron pic.twitter.com/8mfvxUsOcI

Others pointed out that Trump's "Make America Great Again" slogan has similarities to a Ronald Reagan slogan from Reagan's 1980 campaign.

You never came up with your own slogans. ‘Make America Great Again’ was Reagan. pic.twitter.com/6jzNjD5jPD

De Blasio has been a frequent critic of Trump since the president took office. After it was revealed that children being separated from families at the U.S.-Mexico border were being held in New York City, de Blasio went to the border himself taking him on over immigration executive orders. He has clashed with Trump on a number of issues, including the city's status as a "sanctuary city," the mayor's comments about Muslims, Trump's budget proposal, Trump's tax plan and climate change.

Trump has also, on occasion, criticized the mayor. During his presidential campaign, he tweeted that de Blasio was the "worst mayor in the United States."

We're stuck with the worst mayor in the United States. Too bad, but New York City will survive!

At an event on Long Island last JulyTrump referenced police who "aren't allowed to do their job" because of a "pathetic mayor." He then asked the crowd, "Were you applauding someone in particular?", an apparent swipe at de Blasio.

De Blasio responded to that apparent swipe with a jab of his own.

The NYPD making NYC the safest big city in America is a historic accomplishment – words that won't ever be associated with @realDonaldTrump.