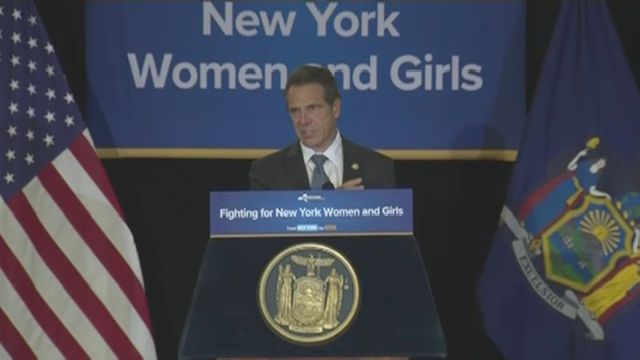 Cuomo, on Trump slogan: America 'was never that great'

President Donald Trump seized on New York Gov. Andrew Cuomo's remarks Wednesday that America "was never that great," mocking him after taking swings at the governor in his state a few days earlier.

In a tweet Wednesday night, Trump repeated Cuomo's "it was never that great" comment made during a bill signing event earlier in the day. Trump then added: "Can you believe this is the Governor of the Highest Taxed State in the U.S., Andrew Cuomo, having a total meltdown!"

The governor made the much-criticized remarks while bashing Trump and his slogan "Make America Great Again."

Cuomo said the Republican president wants to return to an era of greater sexism, racism, and intolerance toward immigrants. He said America has made great strides toward equality, but that it can't consider itself great until there's full equality for all.

"We are not going to make America great again. It was never that great. We have not reached greatness. We will reach greatness when every American is duly engaged," Cuomo said.

The war of words between Cuomo and Trump, a native-New Yorker, escalated in recent days when Trump, on a visit upstate, said Cuomo promised him in a private conservation that he would not challenge Trump in 2020.

"He called me and he said, 'I will never run for President against you.' But maybe he wants to. Oh, please do it. Please," Trump said. "The one thing we know and they do say: Anyone who runs against Trump suffers."

Cuomo was asked Tuesday about that conversation with Trump, and he didn't explicitly deny it, claiming he and Trump have not discussed politics. But a spokesperson for the governor later said Cuomo never made that assurance to the president.

Cuomo is seeking a third term this fall and is considered a potential White House contender in 2020. He has been hammering the president in election TV ads and on the campaign trail, attempting to position himself as New York's best defense against policies from Trump and his administration.

THE GOVERNOR'S OPPONENTS POUNCE ON HIS COMMENTS

"America, with its imperfections, has always been great," the Dutchess County executive said in a statement. "Mr. Cuomo owes the nation an apology. He should be ashamed of himself."

A spokeswoman for the governor later issued a statement that took on Trump but also reversed what Cuomo had said earlier, saying, "The governor believes America is great and that her greatness will be fully realized when every man, woman, and child has full equality."

"I think this is just another example of Andrew Cuomo trying to figure out what a progressive sounds like and missing by a mile," Nixon said.

While polls show Cuomo with large leads over Molinaro and Nixon in the governor's race, Cuomo has made several unforced errors on the campaign trail this year.

This spring, Cuomo made a joke about Jewish people being poor dancers, and he more recently made an awkward joke about being one of the few men in a room surrounded by women.

Cuomo's remarks on Wednesday became a bit of viral sensation, getting traction in national media. His campaign team tried to change the topic back the tax returns of Nixon and her running mate, Brooklyn City Councilman Jumaane Williams.