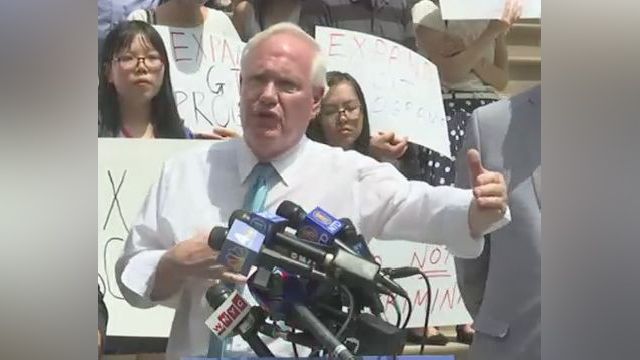 Enter State Sen. Tony Avella, who led a rally at City Hall on Tuesday to save it.

"This is all designed to give our kids a better education so they can pass the test," the Queens lawmaker said at a press conference at the rally. "For the record, I favor keeping the test as it is."

Avella's proposal would require every elementary and middle school to have at least one class for gifted students at every grade level. The goal is to identify promising students early, and better prepare them for the three-hour test that is the sole basis for entry to high schools like Stuyvesant High School and Bronx High School of Science.

White politicians and Asian activists talking about what need to be done to help black and Hispanic students (not change the specialized high school admission system, in their opinion, but add gifted and talented classes for black and Hispanic kids). pic.twitter.com/pGMW7cscbw

"The gifted and talented programs work. All right, let's focus on that," Queens City Councilman Bob Holden said at the press conference. "That's how you build: from within. Raise the bar."

The approach clashes with that of Schools Chancellor Richard Carranza, who opposes tracking students by academic proficiency.

His boss, Mayor Bill de Blasio, wants to scrap the entrance exam, saying it's responsible for an unacceptable racial imbalance. Most students in the city's specialized high schools are white and Asian, but black and Hispanic students make up the majority of the school system.

Elementary schools with large black and Hispanic enrollment often have few, if any, gifted and talented programs. Avella and supporters of his proposal said his approach would help those students.

But there were no black or Hispanic elected officials or advocates at his press conference. Avella said he has not yet reached out to those communities.

"This is the first step. Moving forward, everybody here is going to be reaching out to the greater universe to get support for this," Avella said.

The de Blasio administration says it's committed to abolishing the test, though that requires a state law and it's unclear if there's enough support in the New York state legislature.

WHAT IS THE SPECIALIZED HIGH SCHOOL ADMISSIONS TEST?

HOW IS THE CITY TRYING TO CHANGE ADMISSIONS POLICIES?

The city is advocating for legislation to require the schools to move toward a system that ensures the top seven percent of students from every middle school in the city gets a spot at a specialized high school.

"Now, a disadvantaged student who is just a point or two shy of the cut-off won't be blocked from a great educational opportunity," the mayor wrote in an op-ed in the education website Chalkbeat.

The specialized high schools rely solely on SHSAT to admit students every year. The cut-off for admissions varies from school to school.

De Blasio has always said that, philosophically, he has been opposed to the way the specialized high schools chose their students, but this the first time the mayor has presented an actual plan to scrap SHSAT.

De Blasio said he's pushing the change now, in part, because he is expecting Democrats to win control of the New York state Senate in November.

THE ISSUE OF SEGREGATION

Using students' middle school rankings as the basis for admissions would allow more students across the city to be represented — more than half of the students that are admitted to the specialized schools come from just 21 middle schools.

Nearly 70 percent of public school students in the city are black and Latino, but just ten percent gain access to the city's top high schools.

Stuyvesant High School, for example, is welcoming 900 new freshmen in September; just 10 of those students will be black.

But Asian students say his proposal would end up denying them admission.

Asian students make up about 16 percent of the school system, but about 52 percent of those accepted to the eight schools. At Stuyvesant, three out of four students are Asian.

State lawmakers have said in the past that they do not want to change the test. They have listened to alumni interest groups from the schools and have said that the exam is the fairest way to determine who should be admitted.

The powerful alumni groups from the specialized high schools have successfully lobbied for decades to keep SHSAT. Some have argued that opening up admissions at the specialized schools would weaken them.

De Blasio has said that argument is un-American.