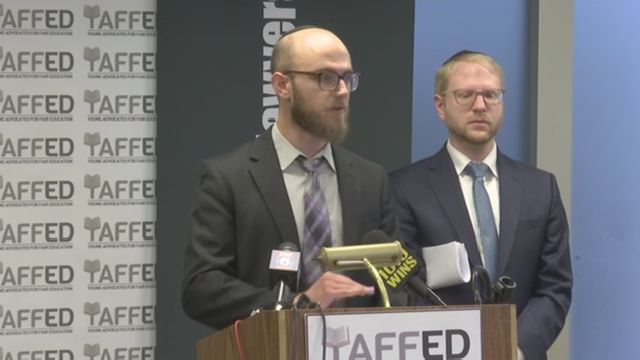 Pesach Eisen attended Orthodox yeshivas, where he says he studied religious texts in Yiddish and little else.

"I received zero secular education from the age of 13 till the end," Eisen said at a press conference Monday. "I repeat: zero. No English, no math, no history, no science, no social studies, no physical activity, no gym, no sports, no nothing."

Eisen is a member of YAFFED, Young Advocates for Fair Education, which filed a federal lawsuit Monday against state officials. They object to a state law passed under pressure from powerful Brooklyn state Sen. Simcha Felder that effectively weakens state oversight of Orthodox yeshivas. The group says by singling out one religion for special treatment, the law violates the First Amendment's separation of church and state.

But Avi Schick of the group Parents for Educational and Religious Liberty in Schools says these criticisms amount to an over-generalization by a handful of disgruntled students.

"There are hundreds of independent schools that offer Jewish, religious, and secular studies education in New York City," Schick said. "The idea that they're all going to be defined through the narrow lens through of a single or handful of disgruntled former students is false."

In a statement Monday, a spokesman for Gov. Andrew Cuomo said,"...the legislature passed a law that sought to balance the unique needs of yeshivas with the high educational standards we require for every New York student, and we remain committed to achieving that balance."

Separate from the lawsuit, critics also blame Mayor Bill de Blasio for dragging his feet on an investigation into the issue that's now three years old.

"Mayor de Blasio on this issue is lumped together with Simcha Felder. Two sides of the same coin, and that's astonishing," said Naftuli Moster, the founder and executive director of YAFFED.