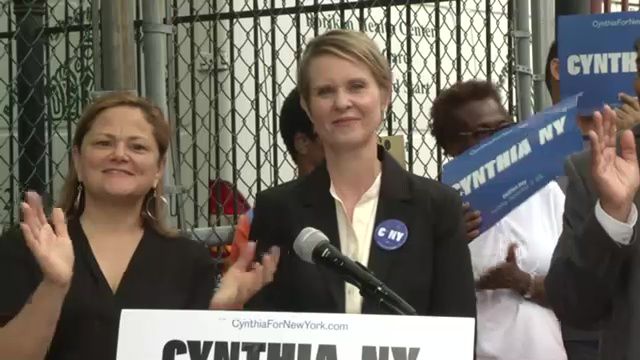 Cynthia Nixon unveils plan for jails and prisons across the state

Cynthia Nixon took her underdog campaign for governor to Harlem on Friday to unveil a new plan she had for jails and prisons across the state: to completely eliminate solitary confinement and change the state's new law dealing with youthful offenders.

"As governor, I will expand raise the age so all youth under 18 are treated as children and are sent to family court for all offenses," she added.

Under the raise the age bill signed into law by Governor Andrew Cuomo last year, the age of criminal responsibility went from 16 to 18, but teenagers charged with more violent crimes will be sent to a new youth division in criminal court, not family court.

"Closing down juvenile jails will save the state significant funds that can be reinvested in programs to help at-risk youth," she said. "We should not be holding 16- and 17-year-olds in cages."

Just hours after Nixon's announcement Friday, we got a call from Governor Cuomo's counsel, Alphonso David.

"Unfortunately, she has no idea what she is talking about," David said.

He slammed the candidate for what he said were ill-informed proposals.

"She says I want to eliminate children's jails. They do not exist in this state," he said.

Technically, the state has what are called secure and non-secure detention facilities. Semantics, maybe. At some facilities, juveniles are placed in secured bedrooms.