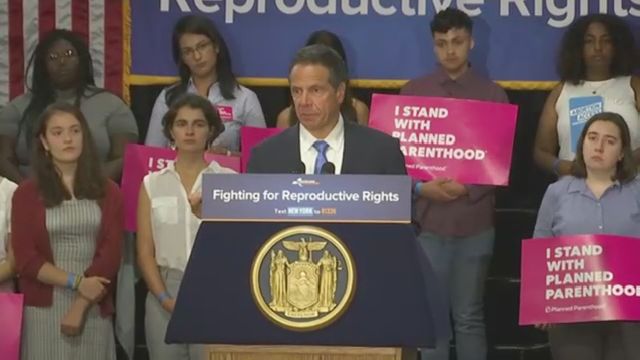 With Roe v. Wade potentially in jeopardy, New York Democrats are looking to Albany for protection.

For several years now, the Democrat-controlled state Assembly has passed what is known as the Reproductive Health Act, which would codify the federal abortion law at the state level. But state Senate Republicans have refused to bring it to a vote.

"We need the New York state Senate to come back to Albany," Gov. Andrew Cuomo said at a press conference Monday. "The law is passed. It's sitting there by the Assembly. We need them to come back today and pass that law."

But the Albany session ended last month. For lawmakers to return, Cuomo must call a special session, something he is unlikely to do since he cannot force the Senate to vote.

Cuomo's Democratic primary opponent, Cynthia Nixon, who was in Queens on Monday to endorse pro-choice Senate candidate Jessica Ramos, said Cuomo has had almost eight years to get the Reproductive Health Act passed.

"He is too little, too late," Nixon said. "He has put his finger in the wind and realized too late that if one is going to call oneself a progressive, one has to actually fight like a progressive. Yeah, he's had seven-and-a-half years."

Last month during the waning days of the legislative session, the Senate chamber was split evenly between Republicans and Democrats. That gave Democratic Lt. Gov. Kathy Hochul the opportunity to act as the tiebreaking vote.

"We tried that twice. That was the tactic. Both times, the Senate president decided to lay aside the bill — which is totally in his power," the governor said. "The lieutenant governor does not have a power to force a vote."

Lawmakers had already returned to their districts for the remainder of the year, and most insiders think it's highly unlikely they would return to vote on abortion or anything else.

Democrats and many of their progressive challengers are looking ahead to the fall elections to try and win back a Democratic majority in the New York state Senate. But Senate Republicans point to Democratic Party infighting as the reason they will not.