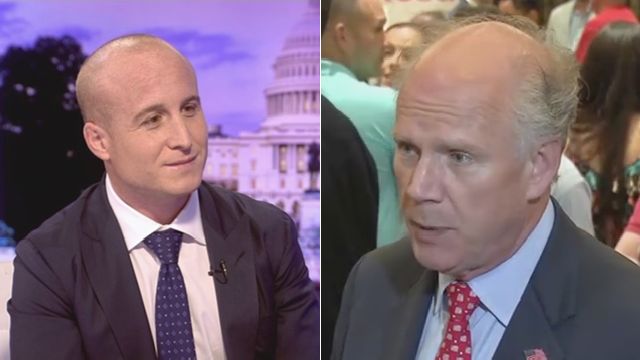 It was a surprisingly solid victory for Rep. Dan Donovan, who for months was locked in a nasty primary battle with Michael Grimm.

But Tuesday, Donovan swept the entire district. In almost every area seen in red in the map in the video above, the incumbent beat his opponent.

"Make sure we beat the Democratic candidate in November and keep the only Republican seat in New York City Republican," Donovan, who represents the 11th congressional district in New York, which covers Staten Island and a portion of Brooklyn, said to supporters in his victory speech.

When we were talking to voters, many gave one reason why they backed Donovan over Michael Grimm: "Maybe because Trump supports him," one supporter said.

The president's endorsement of Donovan likely played a big factor in the congressman's win.

But turning to the general election, it is already providing some material for his opponents.

Within hours of Donovan's victory, the Democratic Congressional Campaign Committee released a new ad slamming Donovan and his shift to the right during the primary.

That is something the Democratic nominee, Max Rose, also picked up on: "All Dan Donovan has proved with this race is he has no core beliefs, he has no spine, he has no energy," Rose said. "We are going to take this to him so hard. He has no idea what's coming for him."

Democrats have targeted this seat to try to flip. It hasn't been in Democratic hands since 2010.

Democrats do have an enrollment advantage. There are more than 183,000 active Democrats versus about 110,000 active Republicans.

But what often swings elections in the district are voters unaffiliated with any party. There are more than 88,000 of them — voters who are already being targeted.

"This district is full of people who vote for the person, not the party," Rose said. "That's been clear as day from the beginning of this campaign."

"Between now and Nov. 6, we will continue to show the people of Staten Island and south Brooklyn I am the one they should send back to Washington," Donovan said.