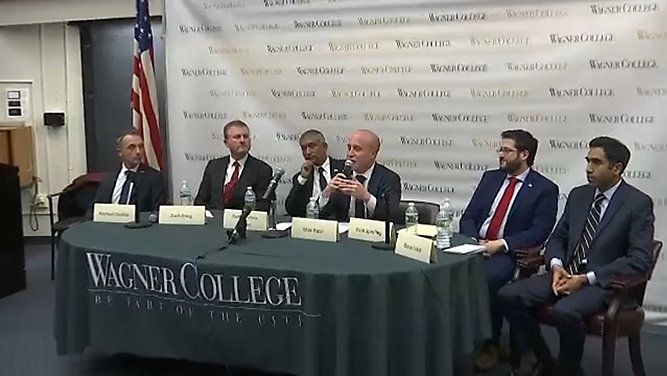 If you’ve heard anything about the Democratic primary in the 11th District, which covers Staten Island and a wedge of southern Brooklyn, you've probably heard about Max Rose, who plays up his past as a combat veteran, leads the pack in donations and is the choice of national Democrats. He says politicians could learn something from the troops.

"We need to stop just thanking them for their service. Let’s start mimicking that self-sacrifice," Rose said. "That’s the attitude I’m going to bring to Washington, D.C."

Another Democrat, Omar Vaid, works on film sets. touts his union membership and says he wants to strengthen the labor movement.

"I’m also the son of immigrants. And I think right now, especially like with Michael Grimm’s comments, it’s really important to have a leader that, if elected, will stand up and intervene to protect immigrant families here in Staten Island and Brooklyn, and on the border," Vaid said.

Radhakrishna Mohan is himself an Indian immigrant, an elected union officer and a community board member. He says his top goal is reducing prescription drug costs.

"Health care is not a privilege, it’s a right. So American people should get the health care they deserve," Moran said.

Another military veteran, former Marine Michael DeVito, works with young adults at a nonprofit and casts himself as a strong advocate for organized labor.

Paul Sperling, 25, is the youngest of the six Democrats. A property manager, entrepreneur and community organizer, he frames his age as a virtue.

"Once elected, I will be the youngest person in Congress in the 21st Century, and I think that’s significant," he said. "With the way the politicians have screwed things up in our system, we need young leadership to get this country on the right track."

Then, there's bond trader Zach Emig, who campaigns by motorcycle. He's staking his candidacy on Democratic anger in the age of Trump.

"If you are looking for a Democrat with the moral clarity to stand up and say 'Yes, impeach now,' then Zach Emig is the choice next Tuesday," he said.