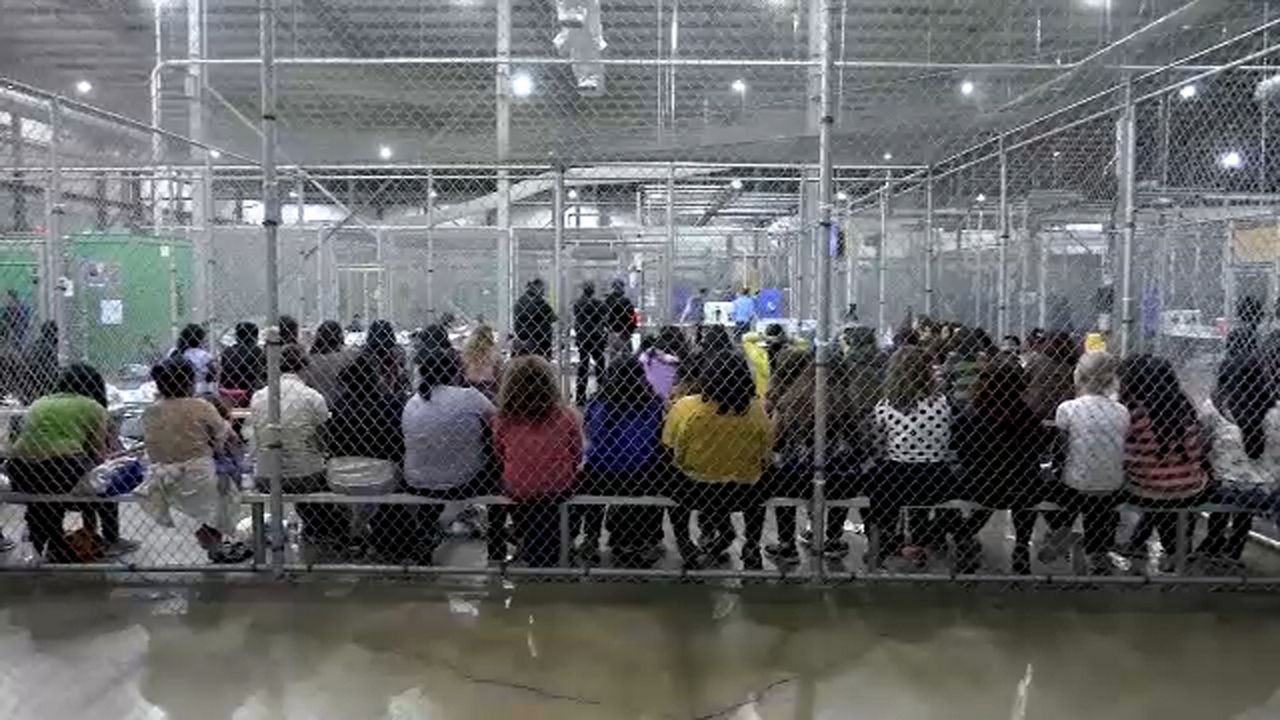 A file image, provided by the U.S. Customs and Border Protection, of a Texas facility.

Congresswoman on tour of a Texas facility: Kids separated from families are kept in cages

A Queens congresswoman said she saw migrant children, separated from their families at the border, kept in cages when she toured one of the holding facilities along the U.S.-Mexico border Saturday.

"It's not normal to see kids sitting still for that long, days on end," Rep. Grace Meng said. "Everything is worse than I thought, that I had seen on TV."

Several Democratic lawmakers traveled to Texas on Saturday to tour one of the holding facilities.

Meng was among the group that visited a facility in McAllen, Texas. She said each child there slept on a padded mat, and had to stay there all day. She also described seeing children sleep with thermal blankets.

Just toured the McAllen Border Patrol's Centralized Processing Center. Heartbreaking to see the impact that @RealDonaldTrump's policy is having on children & parents. I describe what I saw in the video below. #KeepFamilesTogether pic.twitter.com/vtRQRbkgNp

Some of what the congresswoman described matched what was seen in video of a Texas facility that U.S. Customs and Border Protection released. The video shows migrant children waiting to be processed while behind wire fences, and some are under thermal blankets. Critics have called the conditions inhumane.

MENG: PARENTS HAVE LIMITED INFORMATION ABOUT THEIR CHILDREN

The congresswoman said she also went to a U.S. Immigrations and Customs Enforcement detention center in Brownsville, Texas and met about 30 mothers who have been separated from their children. She said most of them have not spoken to their kids and do not know where they are.

I’ve arrived at the U.S.-Mexico border in Texas. About to tour the McAllen Border Patrol Station and Centralized Processing Center. #KeepFamilesTogether pic.twitter.com/Q1zBzd8WqN

This is what was provided to families separated at the border. Unconscionable that children were taken from their parents. Heard stories first-hand from advocates here in McAllen. Very troubling & upsetting to hear. #KeepFamilesTogether pic.twitter.com/LIlbxWjhQ5

According to Meng, the lawmakers were not able to bring any phones or recording devices into the facilities. She said they could not speak to the kids at the McAllen site, although they were allowed to speak to the mothers in Brownsville.

She said a few mothers speak to their children two minutes a week but do not know where their kids are located and who is taking care of them. Meng said it was an emotional experience, with many lawmakers crying with the mothers.

Meng said her trip has not made her confident that the children will be reunited with their parents soon.

"The president can sign a piece of paper, but he has to ensure that the proper protocol is set in order for parents to know where their children are and actually be reunited," the congresswoman said.

CHAOS FOR CHILDREN AND FAMILIES TRYING TO REUNITE

Earlier this week, NY1 revealed that immigrant children detained at the southern border and separated from their families were being brought to the city.

City officials say at least 239 of children separated from their families were sent to a Cayuga Centers facility in East Harlem as a result of President Donald Trump's "zero tolerance" policy towards people entering the country illegally.

The Trump administration announced plans in April to prosecute all immigrants caught along the southwest border who illegally enter the country. Parents were jailed and children were taken to government-contracted shelters.

In recent weeks, more than 2,300 children were taken from their families under the policy and transported across the nation, at times thousands of miles away from their detained parents. Some of the children, for example, have been sent to foster care agencies in New York City.

After international condemnation and backlash from some members of his own party, Trump on Wednesday ordered that children no longer be separated. The administration says it will continue with prosecutions and seek to detain families together during their immigration proceedings. That move has also sparked an outcry from women's and children's advocates who say children don't belong in jail.

Immigration officials have said they could seek up to 15,000 beds in family detention facilities, and the Pentagon is drawing up plans to house as many as 20,000 unaccompanied immigrant children on military bases.

The Trump administration is also seeking changes to a decades-old settlement governing the detention of immigrant children to try to be able to keep children with their parents in custody for longer periods of time.

Under a previous class-action settlement that set policies for the treatment and release of minors caught at the border, families can only be detained for 20 days. A senior Justice Department official said that hasn't changed.

"This is a stopgap measure," Gene Hamilton, counsel to the attorney general, said Wednesday. Justice lawyers are planning to file a challenge to the agreement, known as the Flores settlement, asking that a judge allow for the detention of families until criminal and removal proceedings are completed.

It is not clear if or when the children already separated will be reunited with their parents. The Department of Homeland Security says it is working on a reunification plan, but it has offered no specific details. Confusion has ensued, with parents left searching for their children.

Image above is a file image, provided by the U.S. Customs and Border Protection, of a Texas facility.