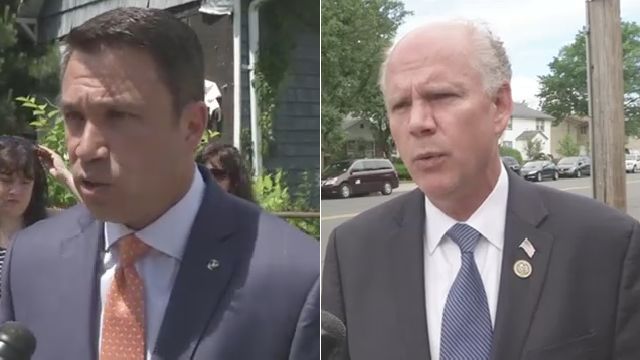 This week, outrage grew over children being separated from their parents at the border.

It is a controversy fueled, in part, by the release of audio by the investigative journalism nonprofit ProPublica. It was recorded inside a Customs and Border Control facility.

The outrage did not seem to cross the Verrazano Bridge and onto Staten Island, where Rep. Dan Donovan and Michael Grimm are in a tough Republican primary fight, where immigration is a central topic.

On Tuesday, Grimm was focusing on Hurricane Sandy, while Donovan was talking about veterans.

But when we asked about the border, 2,000 miles away, the candidates doubled down amid controversy, repeating some of the talking points from the Trump administration.

"If you look at some of the videos that were taken, they have flat screen TVs, pool tables, foosball — they have things they have never even seen before in their country," Grimm said.

In video released of a Texas facility by the U.S. Customs and Border Protection, you see immigrants waiting to be processed behind wire fences. You see people under thermal blankets. Critics have called it inhumane.

With just a week to go before primary day, this topic is not going anywhere, especially as people across the country debate whether this new policy crosses a line.