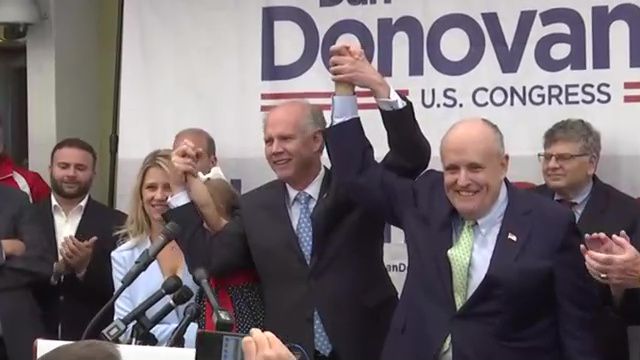 With less than two weeks to go, Dan Donovan's campaign brought out a big name.

"It's not even a choice here," Giuliani said. "We need Dan for you and for us."

Giuliani has always been popular on Staten Island, even as he’s been a somewhat volatile personality since joining trump’s legal team, a volatility that may have continued on Saturday, with Giuliani suggesting FBI agents upset over the 2016 election should get sent to Bellevue.

“It’s an investigation made up of distorted human beings," Giuliani said. "Imagine FBI agents and prosecutors crying when Hillary Clinton wasn't elected. I think if I can get those pictures of them crying instead of investigating President Trump, they should go to Bellevue! Wackadoodles!"

Giuliani says this congressional seat must remain in GOP hands to prevent an impeachment proceeding.

Giuliani is representing Trump in Special Counsel Robert Mueller's investigation into collusion with Russia in the 2016 election.

Of course, that, too, was a topic of conversation Saturday. When asked if he was saying the president is not going to sit down with the Mueller team, Giuliani responded, "The president wants to. I don't want him to, nor do his other lawyers. And what we want instead is an investigation into the Russian probe."

This Trump connection could work in Donovan's favor. The president is incredibly popular in the district, and Donovan faces a tough battle for re-election against former Rep. Michael Grimm.

Giuliani dismissed Grimm's bid, questioning whether he was running to get a pardon. Grimm served prison time for tax fraud.

"He can't get a job, or he wants a pardon or something," Giuliani said. "None of which he's helping by what he’s doing."

"I think he needs a job," Donovan said.

Donovan has received the president’s endorsement, but a recent NY1 Siena college poll found him lagging behind Grimm. It’s unclear if Giuliani will make up the difference.

"People still love him," Donovan said. "He is Staten Island's mayor. We never forgot what he did for our community.”

Donovan continues to say the Trump administration is not finished campaigning for him. They have less than two weeks to go.