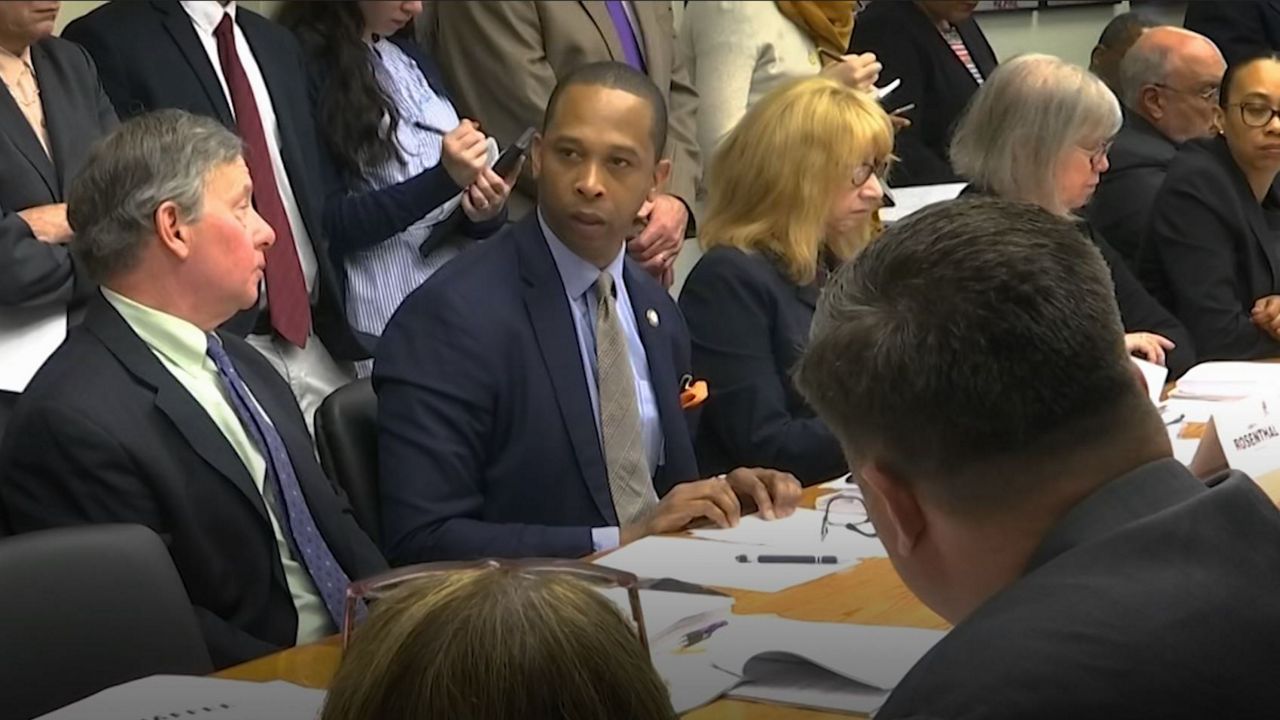 A bill to advance Mayor Bill de Blasio's push to get rid of a test required for admission to the city's specialized high schools passed the state Assembly's education committee on Wednesday. But its fate is still very much in the air.

The Assembly Education Committee met in an unusually packed room Wednesday for the last time before session ends later this month.

"I'm glad that we are having this conversation, because everyone has skin in this game," State Assemblyman Walter Mosley of Brooklyn said during the meeting. "If you want to continue to have skin in this game step up to the table and have your conversation be heard. If not, step back and let other people move forward."

The bill cleared the committee for the first time, after being brought up in years past.

What is the Specialized High School Admissions Test (SHSAT)?

Who is pushing the bill to scrap SHSAT?

The bill is a top priority for de Blasio, and Assemblyman Charles Barron is the sponsor.

"Basically, it would phase out the exam because we are looking at an education system where only nine percent of black and Latino children enter into these specialized high schools, yet blacks and Latinos are nearly 70 percent of the educational system," the Brooklyn lawmaker said.

The mayor has called the exam flawed and pointed to socioeconomic barriers — such as families not being able to afford tutors or test preparation courses — putting students from poorer families at a disadvantage in their efforts to be admitted to the specialized schools.

Is there enough support for the bill in the state legislature?

The bill is unlikely to receive a vote in the Republican-controlled state Senate.

In addition, Gov. Andrew Cuomo has said the legislature should deal with it next year, along with the issue of mayoral control of city schools.

Because African-American and Latino students are heavily underrepresented in specialized high schools compared to their population in the city as a whole, some lawmakers have likened the split to segregation.

But there has been considerable pushback from the Asian-American community.

Asian-American students make up the overwhelming majority in some of these specialized schools, but they have very little representation in Albany.

There are only two Asian-American members of the Assembly, and they say this debate is pitting one minority group against another.

"We need to all meet together and come up with a better solution. But we can't achieve that without the voice of Asian-American families at the table," said Assemblyman Ron Kim of Queens. "We should be part of the discussion every step of the way, and City Hall has made very clear that we are not invited to that table."

The bill was amended last week and brought up for a vote at the request of de Blasio.

"The bottom line is this city is the only city in the country that has single test as criteria for getting into schools," Barron said. "You can get into Harvard and Yale with multiple measures."

Opponents of the bill say the issue of school diversity should have been addressed much earlier by the mayor, and not suddenly with two weeks left in the legislative session.

"They've had eight years to fix this problem, but now they are punishing Asian-American students, giving the facade that they are attacking segregation," Kim said.

Assembly Speaker Carl Heastie issued a statement making no promises that the full Assembly will even consider the bill this year. He pledged only to engage in further discussion to determine the best way forward.