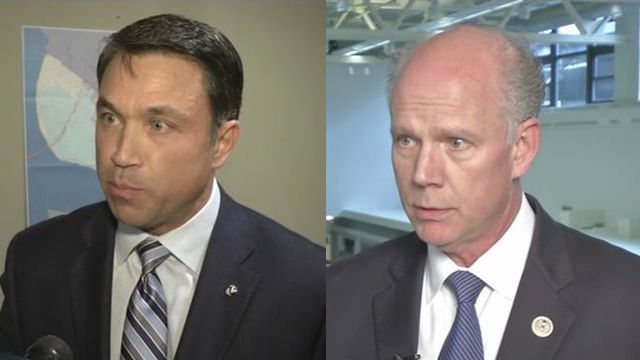 "I do believe we are double-digits ahead," former New York congressman Michael Grimm said in an interview on NY1's "Inside City Hall" last Tuesday.

And according to an exclusive NY1/Siena College Poll, Michael Grimm is right; he is ten percentage points ahead of Congressman Dan Donovan.

Our poll found Grimm is leading Donovan 47 to 37 percent. 16 percent of likely voters do not know who they will vote for in the June 26 Republican primary, or they have no opinion on the race.

But it was Grimm who led across every issue. Voters think he will do a better job representing them on health care, immigration, North Korea, and working with President Trump.

In fact, we know the president has cast a large shadow over the race. No surprise: Our poll found his approval rating is extremely high among these likely GOP voters at 82 percent.

There is no one better to represent the people of N.Y. and Staten Island (a place I know very well) than @RepDanDonovan, who is strong on Borders & Crime, loves our Military & our Vets, voted for Tax Cuts and is helping me to Make America Great Again. Dan has my full endorsement!

Thank you, Mr. President! I’m honored to have your support and look forward to continuing our great work! https://t.co/4422fcfK2b

About 55 percent of our poll respondents were surveyed before that endorsement occurred.

The vast majority of these likely voters said they probably would not change their votes.

Grimm's support transcends the fact that he had to resign from office in 2015.

In fact, when we asked voters who did a better job representing them in congress, Grimm led 46 percent to Donovan's 34 percent.

Even though Grimm has a large lead, it's Donovan who voters think can beat a Democrat in November, 46 percent to Grimm's 35.