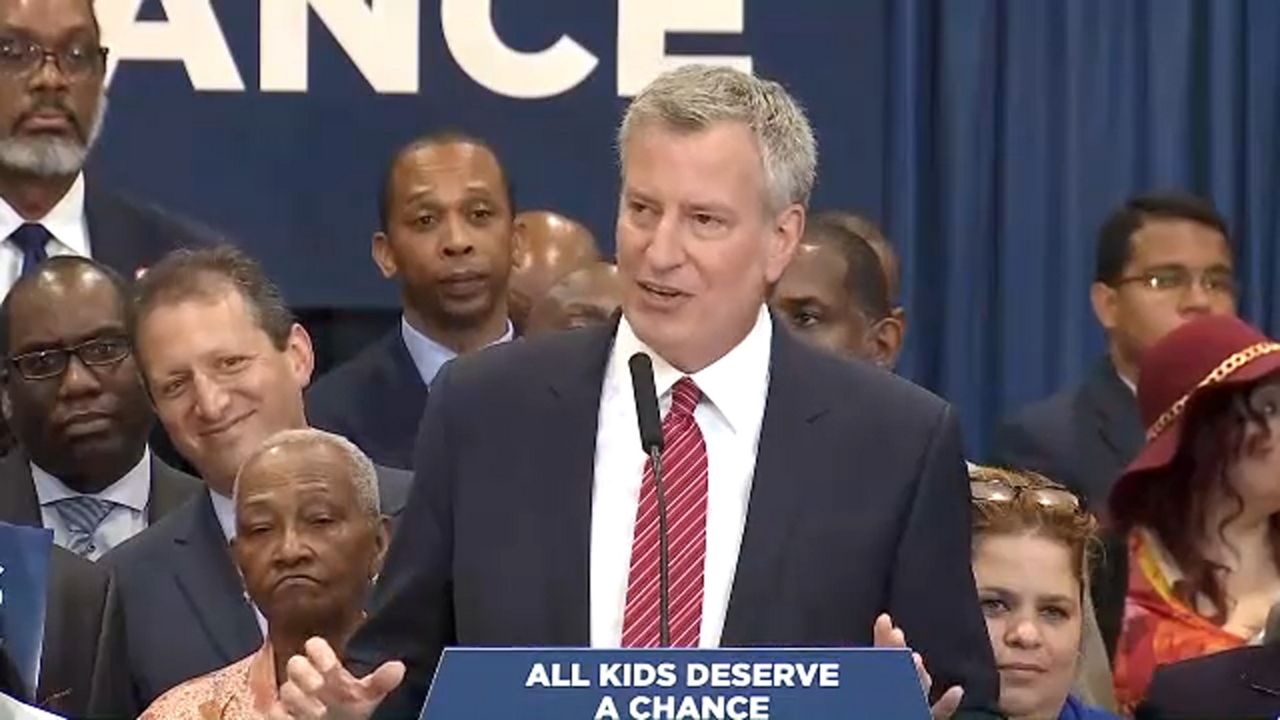 How is the city trying to change admissions policies?

"The single standardized test could never capture all the talent, and the test has to go," the mayor said at a news conference with several elected officials Sunday.

But getting rid of the test requires legislative change in Albany — a challenge. State Assemblyman Charles Barron has introduced a bill to get rid of SHSAT.

Instead of one test, schools would move toward a system that ensures the top seven percent of students from every middle school in the city gets a spot at a specialized high school.

Barron urged the public to pressure their state elected officials to vote for it.

Mayor de Blasio is arguing that #NYC's specialized high schools are missing out on the talent pool by basing admissions on a single test, the Specialized High School Admissions Test. #NY1Politics pic.twitter.com/WwiRRWTnz0

The specialized high schools rely solely on SHSAT to admit students every year. The cut-off for admissions varies from school to school.

De Blasio has always said that, philosophically, he has been opposed to the way the specialized high schools chose their students, but this the first time the mayor has presented an actual plan to scrap SHSAT.

De Blasio said he's pushing the change now, in part, because he is expecting Democrats to win control of the New York state Senate in November.

The mayor said he is not sure if the legislation would pass in the current state legislature session, which ends at the end of the month, but he said he is hoping the next one would take up the issue.

The issue of segregation

Using students' middle school rankings as the basis for admissions would allow more students across the city to be represented — more than half of the students that are admitted to the specialized schools come from just 21 middle schools.

Nearly 70 percent of public school students in the city are black and Latino, but just ten percent gain access to the city's top high schools.

Stuyvesant High School, for example, is welcoming 900 new freshmen in September; just 10 of those students will be black.

But state lawmakers have said in the past that they do not want to change the test. They have listened to alumni interest groups from the schools and have said that the exam is the fairest way to determine who should be admitted.

The powerful alumni groups from the specialized high schools have successfully lobbied for decades to keep SHSAT. Some have argued that opening up admissions at the specialized schools would weaken them.


In arguing for scrapping the Specialized High School Admissions Test, @NYCMayor is slamming the counter-argument that the quality of the specialized schools will drop if the exam is not used. #NY1Politics pic.twitter.com/CN8lkCyg68

Alumni associations from Brooklyn Tech and Stuyvesant High School are denouncing the mayor's move, calling it a complicated and unworkable approach. On Facebook, some called it anti-Asian; Asian students make up the vast majority of students at Stuyvesant and Brooklyn Tech.

De Blasio said his proposal is not anti-anyone, instead calling it pro-opportunity. The city projects that the new admissions policy, if approved by state lawmakers, would add many more black and Latino students to the city's top high schools.