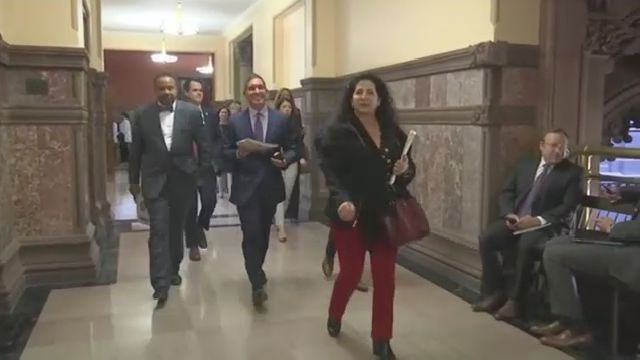 Without much fanfare Tuesday, former members of the Independent Democratic Conference, known as the IDC, casually entered the room where mainline Democrats meet to discuss the day's bills.

For seven years, the IDC held a power-sharing arrangement for control of the state Senate with Republicans. But they finally buried the hatchet with rival Democrats.

"It is really exciting," State Senate Minority Leader Andrea Stewart-Cousins said. "We have had good discussions up to this point, and I'm looking forward to a united Democratic Senate and really doing good things for New York."

Bronx State Sen. Jeff Klein, who previously headed the IDC, will now become deputy to Democratic Conference Leader Stewart-Cousins. He assumed his new seat in the chamber Tuesday, as the previous floor leader, Queens State Sen. Michael Gianaris, moved his seat over from where it was Monday.

"The Senate Democrats are hereby united. I think moving forward we need to win these two special elections, and then hopefully we will have a majority before we leave in June," Klein said. "If not, we are still united to make sure we win a Democratic majority in November."

Next week, Democrats must win two special elections for Senate seats in order to have 32 members, enough to form a majority.

One of those seats is being sought by Assemblywoman Shelley Mayer, who recently came under fire for allegedly discouraging two female Senate staffers from reporting sexual harassment when she served as the counsel to the Senate Democrats.

That supervisor, Angelo Aponte, told the Daily News that he has no recollection of Mayer telling him about the alleged harassment.

In a separate development, Klein told reporters that some of his IDC staff will lose their jobs now that the two conferences are united.