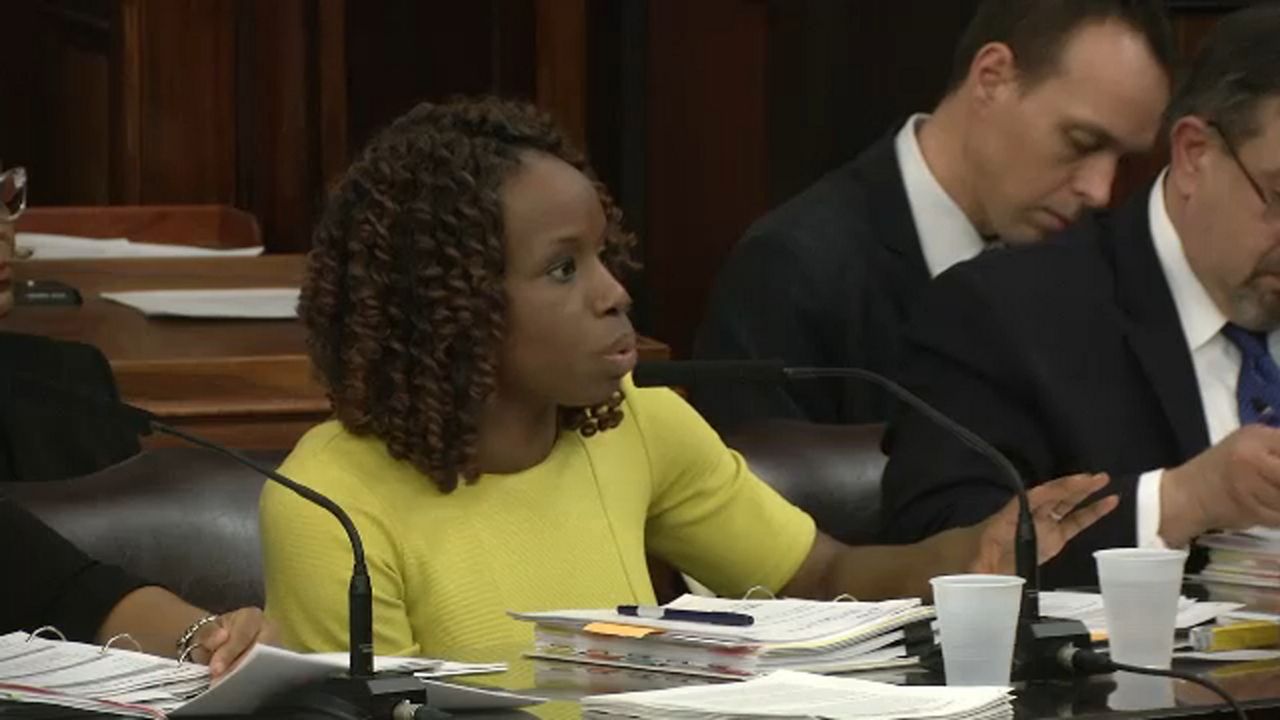 After months of public pressure, NYCHA chairwoman to resign

The chairwoman of the city's public housing authority is expected to resign, sources told NY1 on Monday night, after months of pressure in the wake of a lead paint inspection scandal.

Shola Olatoye has been the chair and CEO of the New York City Housing Authority (NYCHA) since 2014.

The official announcement of Olatoye's resignation could come Tuesday, as she is scheduled to appear with Mayor Bill de Blasio at a tour of a NYCHA development.

"While the challenges facing public housing are significant — I'm incredibly proud of the leadership team we've assembled and the strides we've made over the last 4 years to speed up repair times, reduce crime, launch a major development program and bring NYCHA into the 21st century," Olatoye said in a statement. "I leave this role secure in the knowledge that we created a path for a stronger and safer NYCHA in the years ahead."

With the departure of Olatoye, Stan Brezenoff will be stepping in as interim chair of NYCHA. He was the interim president and CEO of the New York City Health and Hospitals.

In a statement Monday night, de Blasio called Olatoye a "change agent," arguing she helped reduce crime in NYCHA, stabilized its finances, and helped quicken the speed of repairs.

"The Housing Authority that the Chair inherited four years ago faced bankruptcy, an inability to make basic repairs and an alarming surge in violence. She was a change agent from Day One. Crime is down. Repairs are faster. Finances are stabilized. And NYCHA is putting record investment from the City to work making life better for the 400,000 New Yorkers that call NYCHA home. We're grateful for her service," de Blasio said in a statement Monday night. "With a proven track record of transforming large agencies, I'm confident that Stan Brezenoff will help to continue our progress while we search for a new chair."

Olatoye has been pressured to resign since November, when a Department of Investigation (DOI) report revealed that Olatoye had certified that NYCHA had conducted lead paint inspections over a four-year period, beginning in 2013, when the agency had not.

"Signing the forms was a mistake, given what we know," she said at a Dec. 5 hearing at the city council.

It took Olatoye more than a year to go public with the inspection failures once she became aware of the lapses.

She was grilled about that in the Dec. 5 city council hearing:

Bronx City Councilman Ritchie Torres: You've gone 15 months without telling the general public that your agency was out of compliance. Do you regret that?

Olatoye: In hindsight, I — we absolutely — our communication could have been more precise.

She has also faced backlash, including from members of the city council, after thousands of NYCHA residents were without heat and hot water during the winter. In late-January, the city pledged $200 million in heating upgrades for NYCHA.

Numerous city council members had called for Olatoye to step down, and grilled her handling of public housing in hearings over the last few months.

Olatoye had defended her handling of NYCHA, arguing she has been hamstrung by the disinvestment in public housing at a national level over the decades. She said in late-November that she would not resign.

Olatoye testified in a March city council hearing that the problems at NYCHA are long-running, and that threatened federal funding cuts could make them worse.

De Blasio had also defended Olatoye, saying she was part of the solution for the city's public housing.

NYCHA had found itself in the crosshairs in the political feud between the mayor and Gov. Andrew Cuomo, with the two Democratic rivals seeming to compete to see who would do more for the beleaguered agency.

Cuomo had slammed the conditions in the city's public housing as "deplorable," touring units multiple times in March for the first time as governor, and denouncing the city's handling of the units.

Last week, Cuomo signed an emergency declaration that allowed for an independent monitor to be selected, as well as an independent contractor who can oversee repairs to public housing.

It also allows the governor to appoint an independent monitor for NYCHA — a monitor who will then hire an independent contractor who will be in charge of the repairs. $250 million in state funding for repairs was included in the state budget that was passed March 30. Including a previous allocation, total state funds for NYCHA are $550 million. The emergency declaration also allows the governor to take control of the money away from the city's Housing Authority.

The declaration came a day after federal Department of Housing and Urban Development (HUD) imposed tough new restrictions on NYCHA, requiring the agency to get HUD approval before spending any money on upgrades and repairs.

"It is time to move forward and open a new chapter at NYCHA, one that continuously puts the needs of tenants first. This must include a thorough and effective response, not just to the lead and heating crises, but also to the day-to-day needs of NYCHA and the hundreds of thousands of New Yorkers who call these buildings home. While this change will not cure all the problems that have been plaguing NYCHA for years, a reorganization of its management structure, including financial transparency and government accountability, will go a long way in improving operations and conditions," James added in a statement.