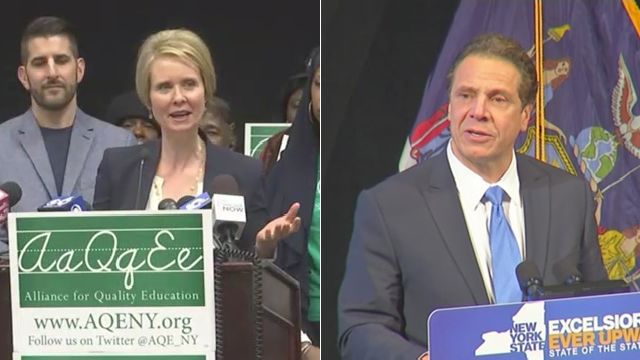 A look at the education records of Cynthia Nixon and Gov. Cuomo

Actress Cynthia Nixon has long cast herself as a defender of public schools.

"I am a proud public school graduate, and I am an even prouder public school parent," Nixon said during a campaign speech in Albany on Monday.

For 16 years, she has lent her star power to the Alliance for Quality Education, a parent advocacy group partly funded by the teacher's union.

Now, she is making her activism for school funding and against education inequity a centerpiece of her Democratic challenge to Gov. Andrew Cuomo.

"Gov. Cuomo doesn't have a strong education agenda. He seems to put his finger in the wind to determine where his position is going to be," CUNY Graduate Center Professor David Bloomfield said.

"Four years ago, it was with the charters; now, he is having a die-in with Randi Weingarten, head of the national teacher's union, over gun control," Bloomfield said, referring to Cuomo's die-in with students protesting for gun control earlier this month.

In his first five years as governor, Cuomo pushed for education reforms opposed by the powerful teachers unions, including using test scores for teacher evaluations, making it harder for teachers to get tenure, and giving school districts flexibility to fire bad teachers.

"Education, the great equalizer," Cuomo said during a speech in 2015. "This is the area, my friends, where I think we need to do the most reform and, frankly, where reform is going to be difficult."

But the teachers unions fought back, running ads and enlisting parents in many communities to join them.

In his second term, Cuomo reversed course and began working with union leaders. The alliance has been uneasy.

In the early steps of Nixon's campaign, leaders for the Alliance for Quality Education have been visibly by her side.

Through the years, Nixon has carried the group's message that schools serving poor black and Hispanic students are under-resourced.

"One of the real problems we have in this country and in this city is unequal funding, and that's one of the things I really fight for," Nixon said in a 2008 interview on "Inside City Hall."

Her activism has recently focused on criticizing Cuomo on school funding:

"Gov. Cuomo is shortchanging the children of New York State," Nixon said in an interview on ABC's "The View" in 2017.

But Nixon has no professional experience in education, and she has enjoyed the benefit of simply being simply an advocate, by not having to say where the extra money she wants for education would come from.

On Monday, Nixon suggested lifting the statewide cap on property tax increases and increasing taxes on the rich, moves that would raise money for the schools but also potentially anger significant blocks of voters.