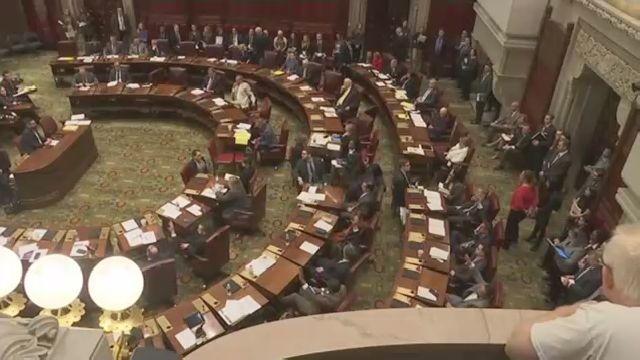 Perhaps the most exciting thing to happen in Albany on Tuesday was a rogue coyote, who somehow wandered onto the roof of the state museum near the Capitol to take a nap.

Inside the Capitol, while there might not have been napping, it was mostly a day of waiting around for something to happen. And not much did.

NY1 has learned that one of the items being negotiated as part of the state budget is a pay raise for lawmakers.

"The last time they had a pay commission, it was basically controlled by the governor and the legislative leaders, and because of some other deal, that's what blew it up. And that's the problem: It can't be just a puppet commission. It has to be real," said Blair Horner of the New York Public Interest Research Group (NYPIRG).

Legislators have not had a pay raise since 1999. They currently make $79,500 a year, plus stipends for leadership positions.

The Bill de Blasio administration remains hopeful that some of its biggest priorities end up in the final budget, including an additional $250 million for public housing, for which Gov. Andrew Cuomo said he would fight.

But the governor wants a string attached: a private contractor to make the needed repairs, something the city opposes.

"Additional oversights, monitors they are costly, and every dollar that we receive should go towards improving the conditions that our residents live in," Acting General Manager of NYCHA Vito Mustaciuolo said.

The de Blasio administration also wants something called Design Build, a process of speeding up major construction projects for its upcoming repair of the Brooklyn-Queens Expressway.

"An enormous, complicated, difficult project, where Design Build could help us shave a couple of years off the timetable, save millions of dollars, and bring some innovation to the table," City Transportation Commissioner Polly Trottenberg said.

The deadline for the state budget is April 1, which is this Sunday. But that's Easter Sunday, and lawmakers are hoping to have a deal, vote on the budget, and get out of the Capitol by Thursday afternoon, the day before Good Friday.