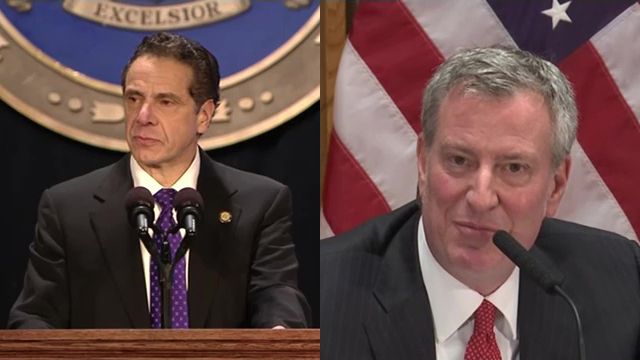 It was supposed to be about the weather, but Governor Andrew Cuomo's conference call with reporters on Wednesday morning got political, and a little strange, when the governor was asked if he thought Mayor Bill de Blasio is pushing his friend, actor Cynthia Nixon, to run for governor.

"I think it was probably either the mayor of New York or Vladimir Putin. And I am going to leave it to you great investigative reporters to follow the facts and ferret out the truth,"

A short time later, the mayor was asked whether he tried to recruit Nixon to run.

"She is a strong, independent woman who makes her own decisions. So this is something you will have to ask her," de Blasio said. "What her choice is, whatever she does it is her own choice. It is as simple as that. I haven't spoken to her in a while. I'm not going to go into any private conversations with a friend. But whatever she does, she is going to be a politically active person. She always has been."

Cuomo was also asked if he feared a challenge from Nixon, who is already well known to many New Yorkers.

The mayor would not commit to supporting Cuomo in a September primary.

"Look, I obviously have real political differences with the governor, and I'm very uncomfortable with how he has handled the Republican state Senate and the IDC, for example, and I've made that clear before," de Blasio said. "I just think there is a reckoning occurring all over this nation in our party. It's time for Democrats to be Democrats."

After the mayor's remarks, the governor called into NY1 to talk about his progressive credentials.

In an interview with the Young Turks taped last month, the mayor indicated he would like to see a primary in the governor's race.

The mayor helped secure the endorsement of the Working Families Party for Cuomo in 2014. The mayor was asked if he planned on doing so again this year. The mayor responded simply with a knowing laugh, but didn't actually answer the question.