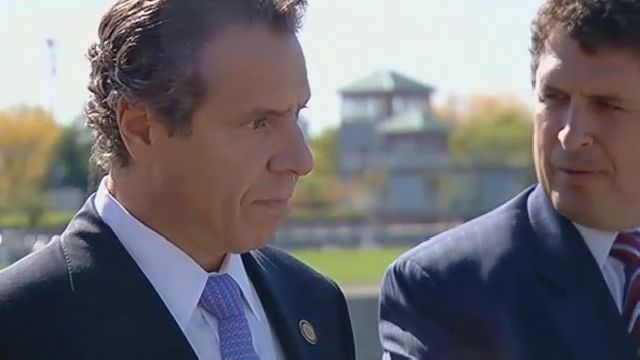 But on Tuesday, jurors were shown a photo of Cuomo with Aiello at a 2011 fundraiser. Aiello, whose firm had business before the state, would then host his own fundraiser for Cuomo, a car buff, in his brother's Corvette-filled garage.

At the center of it all was Todd Howe, a lobbyist whose ties to Cuomo and Percoco go back decades. The alleged middleman in the bribery schemes, Howe has pleaded guilty to eight felonies and is a cooperating government witness.

Aiello wanted to give Cuomo a whopping $125,000 by exploiting a campaign finance loophole.

The reason, Howe testified: "The media would make a heyday out of the fact that that COR had given $125,000 and now was doing state work."

In emails, he pressed Howe: "Need to pull the trigger here. things getting bad," he wrote, and using a nickname for Howe, "C'Mon herb we need to get stuff flowing here! I cant go another month!"

Howe and Percoco also refer to the alleged bribe money as "ziti" in emails: "nice job herb. did you send in the ziti?? cmon herb!! ..." Percoco wrote at one point. Howe replied, "Ziti in the 'oven' !!!"

In another exchange, Percoco writes: "Herb where the hell is the ziti??? ;)" Howe responds: "... Get the tablecloth ready. big Zitti dinner coming!"

Then, after Percoco offered to have Cuomo pop in and say hello to Aiello during a meeting, Howe wrote, "That would be great! Worth another crate of Zitti!"

Other emails and testimony Tuesday reinforce that Percoco had enormous power in state government and acted as an enforcer for Cuomo, at one point in 2014 leaning on top-ranking Cuomo aides and persuading them not to leave the administration.