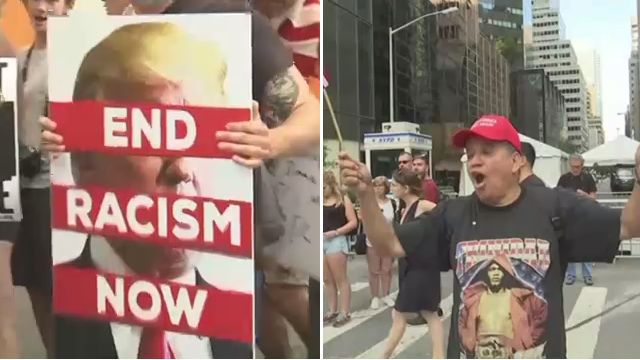 Contrasting Trump rallies meet outside Trump Tower before his visit

One day before President Trump's expected visit to his city home, rallies supporting and denouncing him gathered in Midtown on Sunday.

"Donald Trump has got to go!" anti-Trump protesters chanted outside Trump Tower.

Barricades and police officers separated the demonstrators, who were across the street from each other, outside Trump Tower.

But the pro-Trump rally, which consisted of dozens of people in the afternoon, diminished to a few people by 7 p.m.

By that point, a few hundred anti-Trump protesters marched outside his previous home.

The demonstrations responded to Trump's comments about a violent white nationalist protest in Charlottesville, Virginia on Saturday.

Many people, including numerous public officials across the country, have slammed Trump for not explicitly denouncing the white nationalists and hate groups.

Many officials also criticized the president for claiming that hatred has been "on many sides."

The Queens-native's comments came at a press conference after violence at the Charlottesville protest.

Saturday's chaos erupted as neo-Nazis, skinheads, Ku Klux Klan members and other white supremacist groups arrived for the rally. Counter-protesters were also on hand, and the two sides clashed, with people throwing punches, hurling water bottles, and unleashing chemical sprays. Some came prepared for a fight, with body armor and helmets. Videos that ricocheted around the world on social media showed people beating each other with sticks and shields.

One woman died when an Ohio man, James Alex Fields Jr., plowed his silver Dodge Challenger through a crowd of counter-protesters, killing a woman and wounding at least 19 others, according to officials.

Hours later, two state troopers were killed when the helicopter they were flying in as part of a large-scale police effort at the rally crashed into a wooded area outside the city.

Heightened security and increased gridlock will grip Midtown for Trump's expected stay in his old home for the first time since he was inaugurated.

The president is anticipated to arrive at Trump Tower later Monday and leave Wednesday. Security around the tower is already ramped up.

Street closures are anticipated to go into effect midnight tonight.

56th St. from 6th to 5th Avenues will have managed access to vehicular traffic.

The public is urged to use mass transit and to avoid the area.

Police estimate security costs the city $300,000 a day when Trump is in town.