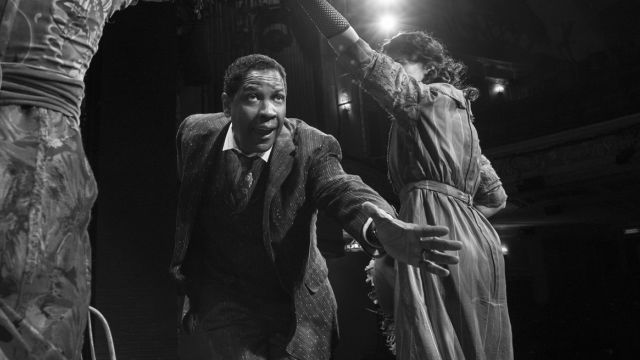 Eugene O'Neill's great play "The Iceman Cometh" is something of a mountain that so many of our best actors feel compelled to climb. Jason Robards, Kevin Spacey, James Earl Jones and Nathan Lane have all met the challenge, and now it's Denzel Washington's turn. But far more than a star vehicle, every member of the production's first class ensemble is scaling the heights in conquering fashion.

O'Neill's drama about lost souls clinging to pipe dreams is an epic tragedy. But anyone seeing the play for the first time might be surprised to discover how funny it is and how suspenseful.  It's all there in the writing, but George C. Wolfe's production digs deep to uncover dimensions unseen before, and that's thanks to some inspired casting and a fresh new directorial eye.

It's set over a two day period in 1912 New York City during a collective bender that's probably lasted for years.   These denizens of Harry Hope's rooming house and bar have all dropped out for one reason or another, and as they live for the next drink, they talk of one day reclaiming their lost hopes. Of course it's not meant to be.

O'Neill's facility for capturing   the unique vernacular of the era is unequaled, and if the play - at nearly 4 hours - is overwritten, and some of the dialogue muddled, each role is crafted and performed with an understanding of human nature that's Shakespearean in scope.

Everyone shines in this production. Colm Meaney, Michael Potts, Bill Irwin, Tammy Blanchard and Reg Rogers merge the comedy and tragedy masterfully. David Morse as the hardened anarchist Larry is terrific. And Denzel Washington tackles the role of everyone's favorite salesman Hickey with a softer edge here. And if it's not the grandstanding performance we've seen in past productions, it is a most honest one from a gifted actor breathing humanity into this super-human character.

"The Iceman Cometh" is in its way O'Neill's version of "The Divine Comedy," only his hell is on Earth. Fortunately with George C. Wolfe and his superlative company to guide us through, we've got a match made in theatre heaven.