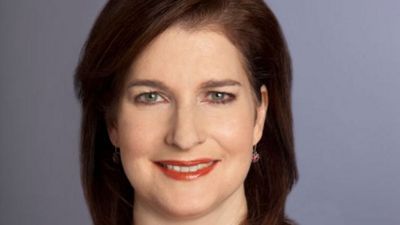 Roma Torre was born just in time to see her mother hauled off to jail. It was a celebrated case involving freedom of the press – Marie Torre, a print reporter for the N.Y. Herald Tribune, became the first journalist in the country to go to jail for protecting a source of information. It was a ten-day sentence.

From such dramatic roots, Roma grew up wanting to be an actress. Born in New York City, she grew up in Pittsburgh and later graduated with a degree in English and history from Tufts University. While in Boston she started a theater company with fellow student Ed Lopez. The theater lasted only 3 years, but the partnership with Ed thrived. They married in 1991, and now have two children: Alejandro and Alegra.

The road to Broadway took a detour. After performing in numerous soaps and off-Broadway productions, Roma traded in the stage lights for the glare of television news cameras.

She began her television career at Channel 2 News, moving up to writing and producing. Then in 1986, when Cablevision announced the formation of the country's first 24-hour local news station, News12 Long Island, Roma was among the first reporters hired.

Roma stayed at News12 for five years, reporting, anchoring and hosting a weekly news program. In addition, she was the film and theater critic for News12, and her reviews were published in the television magazine "Total TV."

From Long Island, Roma headed back to New York City in 1992, where she now anchors NY1's "News All Day." Roma had been anchoring the much-earlier "News All Morning" but the need to sleep and the rigors of running a household with two young children prompted her to graduate to the kinder, gentler midday shift.

Prior to that Roma anchored the award-winning "Inside City Hall," a hard-hitting political and public affairs program described by one critic as "the 60 Minutes of local television."

Roma's theater years are still being put to good use in her role as NY1's Theater Critic. She regularly contributes to NY1's weekly theatre show, "NY1 On Stage," and each year hosts the newschannel's red carpet coverage outside the Tony Awards.

In addition, Roma continues to cover news stories and special events, including NY1's election night coverage, major ticket-tape parades, and whatever else is thrown in her direction.

Roma has won more than 25 broadcasting awards, including an Emmy for reporting and anchoring the Avianca plane crash disaster in 1991. In 1993, she and "News All Evening" anchor Lewis Dodley were honored by New York Magazine's "Best Of" edition as the best news anchors in New York.

In 2003 she was the recipient of the Newswomen’s Club of New York's 2003 Peggy Award for Broadcasting, for her review of the Broadway show "Big River."